By Ben Goodlad, Analysis Manager
The recent DPRK missile test which saw a missile pass over Japan could see an increased calls for the deployment of sea based SM-3 Block IIA missiles to augment the stocks of SM-3 Block IA missiles already in service. At the same time the case for deploying the land based Aegis Ashore system is seen to have been strengthened. 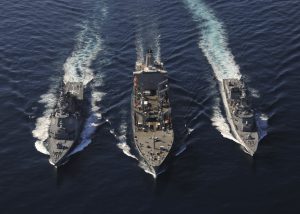 USNS Tippecanoe, center, refuels the Japanese Maritime Self Defense Force (JMSDF) destroyers JDS Kongō, left, and JDS Ikazuchi. The Kongō class of guided missile destroyers serves as the core ship of the JMSDF’s Escort Flotillas. Constructed in the 1990s, the Kongō class are equipped with the Aegis fire control system, being one of the few ship classes outside of the United States to have that capability.

The fact that North Korea launched a missile that traveled over Japan raises a significant question for Japan’s Ministry of Defense. Why was no attempt made to intercept the missile? Before previous test launches Japan has stated a willingness to intercept any missile that posed a threat to its territory. However in this case, whilst the sense and warn element of Japan’s missile defense shield was activated, no interception was attempted. Of course political rhetoric before test launches and the cold political reality of having to make decisions in a real life scenario are two separate matters. Whilst perhaps only the Japanese Government will know precisely why an interception was not attempted there are some possibilities that should be explored. Firstly it is possible that that there was a lack of will to commit to an intercept given the fact that the actual threat posed by the missile was limited. Such an action would have been an escalation and a political calculation may have been made to employ restraint. At the same time, given the finite number of interceptors at Japan’s disposal and the high cost of replacement, it is possible that a decision was taken to save resources for use against missiles that could pose a greater threat in the future. One must only look at recent conflicts in Israel to see this strategy being employed, where Iron Dome interceptions only took place in situations where incoming rockets posed an actual threat. The cost of a potential interception in terms of resources, escalation and the potential of a high profile failure may have been judged to be greater than the actual threat itself.
On the other hand, given the fact that a southern launch was anticipated it is likely that Japan’s missile defense assets, in the form of SM-3 armed Kongou class Aegis Destroyers, were simply in the wrong position for an optimal interception. With limited interception capability it would have been a lot easier to be surprised by the unexpected flight path of the missile. As a consequence the incident is likely to further calls for Japan to deploy a ground based system, likely in the form of Aegis Ashore.
A ground based version of the system deployed onboard Japan’s destroyers, Aegis Ashore would be able to provide constant coverage of the Japanese mainland. Japan is already likely to introduce the longer range SM-3 Block IIA missile which was co-developed between Japan and the United States. This incident will only strengthen the case for procurement, not only at sea but also potentially on land. Of course significant obstacles would need to be overcome before the deployment of Aegis Ashore could take place, with limited budget at the forefront of the debate. However it is likely that the case to invest in Aegis Ashore will have been strengthened both in order to ensure that an interception could take place but also as a measure to reassure the Japanese people.

Ben Goodlad is an Analysis Manager with Avascent Analytics, based in Avascent’s London office. Ben was previously a Principal Weapons Analyst at Jane’s, joining in 2007. Whilst at Jane’s, Ben specialized in the missile and precision guided weapons markets, providing analysis and 10-year market forecasts. During this time Ben has been quoted by international media regarding issues relating to weapons related topics and missile defense. He has also had work published by the Polish Institute of International Affairs (PISM) relating to missile defense in Asia.
Prior to joining Jane’s Ben served with the British Territorial Army and graduated from King’s College London with a BA in War Studies. For more information, contact: bgoodlad@avascent.com.
[divider_advanced color=”rgba(176,21,30,1)” paddingTop=”0″ paddingBottom=”15″ thickness=”4″]

The Weekly Wire: For Your Situational Awareness 8.25.17Weekly Wire 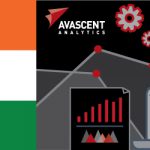