By Hamilton Cook, Senior Market Analyst
The Indian Navy has once again embarked upon a journey to acquire new maritime helicopters and naval utility helicopters. On August 23, the Indian Navy released an RFI that outlines a $10 billion acquisition of up to 234 rotorcraft. These include 123 units for the Naval Multirole Helicopter (NMRH) program and 111 units for the Naval Utility Helicopter (NUH) program. The new acquisition strategy comes after both existing NMRH and NUH programs stalled.
The program is also one of the first under the Indian government’s new Strategic Partners strategy for “Make in India” which will see a winning Indian company paired with a winning international OEM to produce the helicopters. The Indian government has already named Bharat Forge Ltd, Reliance Defence and Engineering Ltd., Larsen & Toubro, Mahindra Aerospace, and Tata Advance Systems Ltd as the competitors for indigenous portion of the competition and has sent RFIs to Lockheed Martin/Sikorsky, Bell Helicopter, Airbus Helicopters, and Russian Helicopters to serve as the international OEM.  Notable exclusions include the ubiquitous and infamous Indian aerospace manufacturer HAL, which was excluded from the competition as a state-owned corporation, and Leonardo-Finmeccanica, which was barred from the competition after bribery allegations during a $620 million contract for VVIP helicopters in 2014.

An MH-60R Seahawk helicopter in flight over the Pacific Ocean. As one of the world’s premier maritime helicopters, the MH-60R is likely Sikorsky’s preferred offering for the new Naval Multi-Role Helicopter competition.


The Naval Multi-Role Helicopter requirement is likely to resemble the most recent competition for Indian maritime helicopters, a 2016 Sikorsky win for 16 S-70s. The $7 billion requirement calls for a 9-to-12.5-ton helicopter capable of anti-submarine warfare (ASW) and search-and-rescue (SAR) operations. This will likely lead to Lockheed and Airbus resubmitting the S-70 and NH90 while Russian Helicopters will push continuity of fleet with a Ka-28 derivative. Bell, whose inventory primarily consists of lighter helicopters and heavier tiltrotors, will be comparatively hard-pressed to field a competitive aircraft, but may make an aggressive move to militarize the new 525. It also remains to be seen whether improving US-Indian strategic and political relations will have an impact on the competition, as Sikorsky faced some disadvantage in the previous competition due to restrictions on MH-60R exports and whether anti-ship missiles will reemerge as a requirement
Meanwhile, the less-heralded $3 billion competition for 111 multi-utility helicopters will find a replacement for the aging 2.5-ton Chetak (Alouette III) helicopters used by the Indian Navy. However, instead of being an in-kind replacement, the naval utility helicopter is planned to be 4.5 tons and requirements have already been set for the helicopters’ ASW and ground attack capabilities (one lightweight torpedo or two depth charges, and rocket pods and .50 caliber machine guns). Given the weight and capability requirements, it is likely that Russian Helicopters will continue its years-long push to sell the Ka-226 to India and Bell will take advantage of an active UH-1Y line to pitch a Venom variant. Meanwhile, depending on requirements, Airbus could conceivably pitch either the H145 or AS565 to meet requirements. Sikorsky may face some difficulty here, lacking a missionized light helicopter, but will likely promote the S-76 or a MH-60S with significant commonality with its NMRH offering.
[blockquote align=”left”][The Indian Government’s] willingness to cancel and re-compete programs…demonstrates that it prioritizes the long-term development of a domestic defense industry over present operational needs.”[/blockquote] At this time, it appears unlikely that the Indian government will complete such an ambitious acquisition, particularly under the new, unproven “Make in India” requirements. The Indian government has shown consistent patience, delaying implementation of “awarded” programs in order to maximize its leverage. Its willingness to cancel and re-compete programs, such as the MMRCA, A330 MRTT, and previous maritime helicopter acquisitions, demonstrates that it prioritizes the long-term development of a domestic defense industry over present operational needs. So, while it is likely that the continued deterioration of the Indian rotorcraft fleet will spur the acquisition process forward, it is more likely that complications (and quite possibly further scandals) will arise and stretch out the timeline on any buying decision.
In addition, the current combination of two separate rotorcraft purchases into a single acquisition program exhibits significant risk to both bidders and customer schedule. The Indian government has previously pitched these large “winner-take-all” programs only to cancel or break them into smaller competitions such as on the MMRCA. However, this consistent practice is likely being used as a means to temporarily incentivize aggressive bidding behavior particularly in workshare, technology transfer, and offset negotiation. Then, once bidders have been forced to reveal their hands, the government is likely to break up the competition in order to develop a wider industrial base, while maximizing leverage in negotiations.
In terms of bidder behavior, outside observers should pay close attention to the two American firms, Sikorsky and Bell, as they are more likely to favor a split competition. While the Russian government has previously pitched both the Ka-28 and Ka-226 to India, and Airbus has a diverse helicopter portfolio, Sikorsky and Bell have more narrow offerings driven by their positions in the American industrial complex. Meanwhile, despite appearances, Indo-Russian military industrial relations have become more tenuous recently as the Multi-Role Transport Aircraft program failed and sudden Russian price increases have beset the Fifth Generation Fighter Aircraft (FGFA). Even apparent successes like the Ka-226 have been marred by strain, as cash-poor Russia seeks to circumvent “Make in India” regulations to both maximize its own workshare (or force sole-source Russian production) and exclude foreign (Western) incumbents on the Ka-226 from the rapidly growing Indian military helicopter market. With these portfolio gaps in mind, shifts in technical requirements will offer significant visibility into how competitors value their bids. More generalized requirements will like open up bidding options for US firms and may indicate that the competition will remain combined, while more restrictive requirements are likely an indication that the competition is to be split apart or that Airbus or Russian Helicopters successfully lobbied the Indian government in order to severely disadvantage the US firms.
[divider_advanced color=”rgba(190,190,190,1)” paddingTop=”10″ paddingBottom=”10 thickness=”4″]

Hamilton Cook is a Senior Market Analyst and Aviation Subject Matter Expert with Avascent Analytics and is based in Avascent’s Washington D.C. office. In his role at Avascent, Hamilton specializes in airborne platforms and systems, simulation and training, and the US Army.  During this time, Hamilton has been quoted in media regarding US Army aviation, long-range fires, and budgetary policy.
Previously, Hamilton worked in Avascent’s consulting division, where he specialized in military platforms as well as services price-to-win. He is a graduate of Washington University in St. Louis’s Olin Business School with a BSBA in Economics & Strategy. For more information, contact: hcook@avascent.com. 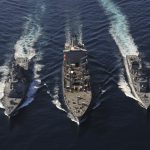 The Weekly Wire: For Your Situational Awareness 9.1.17Weekly Wire