Days after a bipartisan budget deal was reached to fund Washington for another two years, the White House released the FY 2019 budget request on Monday. 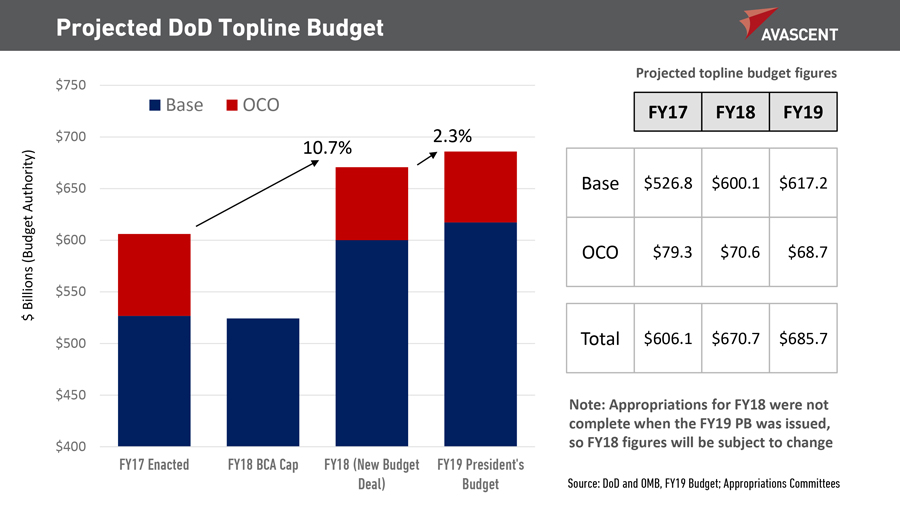 The far-reaching budget deal signed last Friday lifts limits on defense spending by $165 billion over the next two years. Caps on non-defense discretionary spending were also lifted. The deal is considered a win for defense hawks at the expense of fiscal conservatives. Senator Rand Paul led a brief shutdown on Friday morning in opposition to the bill’s impact on the deficit and federal debt. 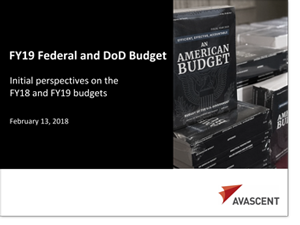 President Trump’s budget request includes $686.1 billion in military funding, with a $617 billion base budget and $69 billion in OCO funding.  Avascent has put together an introductory set of slides showing the likely trends in funding for FY2017, FY2018 and FY2019 under the new budget deal that you will find attached to this email. Overall, defense accounts will see significant increases from FY2017, but it is unclear if this rate of growth is sustainable. The President’s budget request only sees inflation growth for the Department of Defense from FY2020 to FY2023. For more details, please see the following deck: https://www.avascent.com/wp-content/uploads/2018/02/FY19_Federal_n_DoD_Budget_02132018.pdf

The House will mostly be working on suspension bills on Tuesday. Two bills from the Financial Services Committee are scheduled for a vote on Wednesday. The House will vote on the ADA Education and Reform Act of 2017 on Thursday.

Immigration is back on the agenda in the Senate. The Broader Options for Americans Act, an effort to amend the IRS Code, will be considered early in the week as a vehicle for immigration reform. However, Senate Majority Leader Mitch McConnell has pledged to allow an open process, making it uncertain if anything will emerge from consideration.

GAO released another report, ‘Military Personnel: Actions Needed to Better Position the Navy and the Marine Corps to Support Expanding Unmanned Systems Operations.’ Given growing UAS inventories in both services, GAO looked at whether alternate staffing strategies could rein in personnel costs. The report recommends that the Navy and Marine Corps identify circumstances in which federal civilian employees and private sector contractors may serve in operational UAS roles. It also encourages Naval Air Systems Command to update the lifecycle costs for the RQ-21 Blackjack UAS.

The Weekly Wire: For Your Situational Awareness 2.8.18Weekly Wire

The Weekly Wire: For Your Situational Awareness 2.15.18Weekly Wire