This week should be a quiet one in Congress as the House of Representatives is in session for one day, recessing early to allow the body of Billy Graham to lay in state in the Capitol rotunda, and the Senate works through nominations. Churning away in the background will be negotiations on FY 2018 appropriations, as the current continuing resolution expires on March 22. More publicly, the White House will potentially continue its push for gun control legislation in response to the shooting at Stoneman Douglas High School in Parkland, Florida. It remains to be seen if anything can get through Congress in an election year or if this will merely burn down some of Congress’ already limited session time this year. 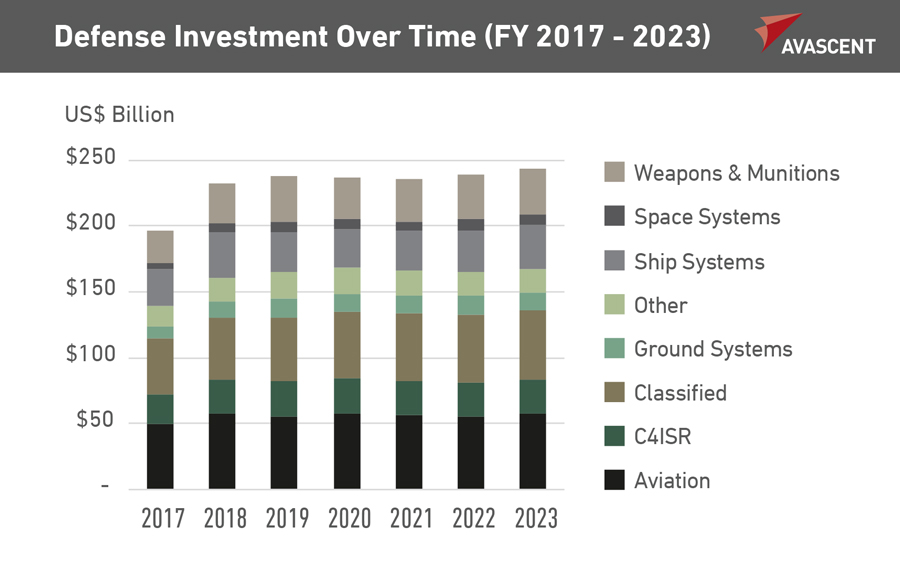 We continue to crunch the numbers on the President’s FY 2019 Budget Request. One of the early trends we’ve noticed is that, while the budget (and the Bipartisan Budget Act of 2018) promise a significant increase in spending in FY 2018 and FY 2019, the results in FY 2020 and beyond are far less rosy. In terms of investment spending, the only service that will receive more money in FY 2020 than in FY 2019 under the current request is the Air Force, as the rest of the services see spending on investment decline to offset likely increases in military personnel and O&M costs. This still leaves investment spending significantly higher than it has been (over $235 billion per year for the FYDP compared to $196 billion in FY 2017), but it does not provide much room for growth as new programs come online or if costs for development of new systems such as the B-21 or the Columbia-class submarine rise significantly.

While this report has had a rough year predicting spending outcomes, we fully expect that, come this time next year, the topline request for FY 2020 and beyond will be significantly higher than what is proposed in the new budget.

The House will pass legislation regarding sex trafficking and financial services before recessing on Tuesday afternoon.

The Senate will be voting on nominations this week.

Two new GAO reports are worth mentioning. First, the GAO reviewed the National Nuclear Security Administration’s (NNSA) long-term uranium enrichment needs and whether NNSA is adequately preparing for future costs. Overall, GAO has found that the NNSA has extended its uranium supply to last until 2038, but that more work needs to be done on estimating costs in this new plan. Full Report here.

The second report looks at the development of program managers in the defense acquisition workforce. GAO compared DoD’s best practices for manager development with “those of leading organizations and found shortfalls.” The study found that the services  execute on some best practices consistently, but there was considerable variation when implementing others. Problems include constructing career paths that direct managers towards the skills needed to advance, and the identification of potential managers by leadership. Full Report here.

Lastly, CBO released a report looking at DoD’s current practices for maintaining existing combat aircraft to produce lessons that can be applied to maintenance of the F-35. While the F-35 will undoubtedly provide new challenges for support and sustainment, this is a good review of the existing maintenance procedures for older fleets.

The Weekly Wire: For Your Situational Awareness 2.22.18Weekly Wire

The Weekly Wire: For Your Situational Awareness 3.1.18Weekly Wire