After a remarkably brief 14.5-hour mark-up, the House Armed Services Committee passed its version of the FY 2019 NDAA just before 1am on Thursday, May 10. This legislation provides an early marker for the coming year’s funding debate over defense spending. Up next will be the Senate Armed Services Committee mark-up on May 23, followed by the Senate Appropriations Committee marking up the defense appropriations bill the week of June 25. The House Appropriations Committee has not yet announced when it will mark-up its legislation, but it is expected to do so before the end of June. Unlike last year, the topline funding level for defense has been set by the Bipartisan Budget Act, meaning that the real debates this year will occur at the account and program level. Last week’s Political Report reviewed some of the plus-ups in the bill, but this week we will provide some information on spending changes at the account level. 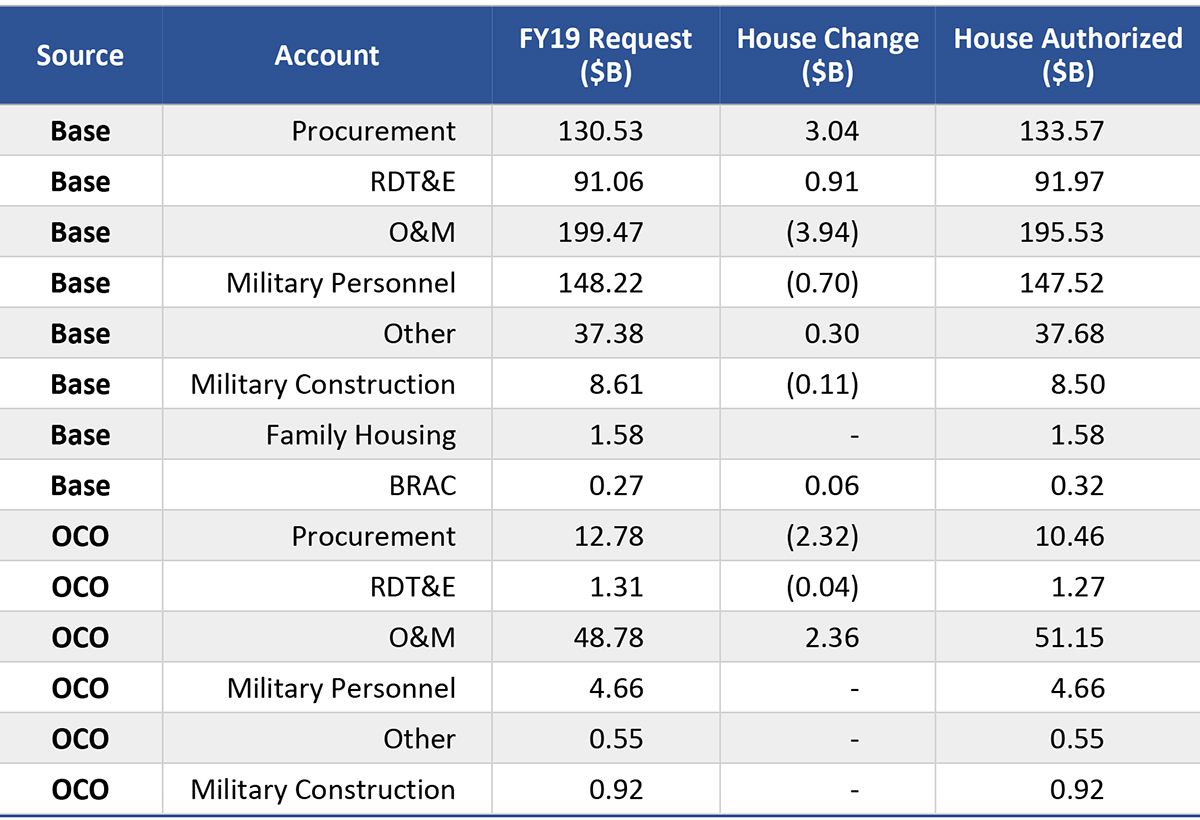 The House will attempt to pass the reauthorization of the Farm Bill this week. While this legislation normally has broad, bipartisan support, the 2013 reauthorization featured a bitterly contested floor fight that saw the legislation fail to gain a majority before passing on a second try, as Republicans sought to impose work requirements and cap spending growth on food stamps. Eventually legislation was signed into law that saw little change to the food stamp program. This year’s reauthorization will likely be as contentious, as House Republicans are seeking to pass a bill with just Republican votes that would impose work requirements for the Supplemental Nutrition Assistance Program. It remains to be seen if they will have the support necessary to put the bill on the floor this week.

The Senate remains focused on judicial nominees this week, with at least two and up to four nominations to be considered.

There are three new GAO reports on defense and procurement. The first highlights substantial overhead account increases for the Foreign Military Sales Program. The next report identifies internal cost control deficiencies in how the Navy manages its properties. GAO also studied DOD’s use of indefinite-delivery contracts during FY 2015–2017.

CBO released a report on how the Navy reactivates decommissioned ships. CBO examined the cases in which the Navy has reactivated combat ships since 1940 and found that the costs of reactivating a ship vary widely depending on the extent of combat system modernization that is required. GAO concludes that reactivating a cargo ship is more straightforward than reactivating a combat ship.

The Weekly Wire: For Your Situational Awareness 5.10.18Weekly Wire

The Weekly Wire: For Your Situational Awareness 5.18.18Weekly Wire