The Weekly Wire: For Your Situational Awareness 10.26.17

On October 21, Pakistan’s Prime Minister Shahid Khaqan Abbasi was given a demonstration of TAI’s T129 ATAK attack and tactical reconnaissance helicopter. The demonstration, which saw Prime Minister Abbasi take the controls for a test flight, comes as negotiations between Pakistan and TAI are ongoing with the potential for a deal to be concluded in the near term. Pakistan has a requirement to replace its fleet of 38 AH-1 Cobra attack helicopters. It is unclear at this stage exactly how many T129 ATAK helicopters Pakistan will procure, with press reports ranging from 30 to over 50 platforms. While in negotiations with TAI, Pakistan has procured 12 AH-1Z Viper helicopters from the US and four Mi-35M attack helicopters from Russia. Developed in partnership with Leonardo Helicopters, the T129 ATAK is a Turkish variant of Italy’s A129 Mangusta. 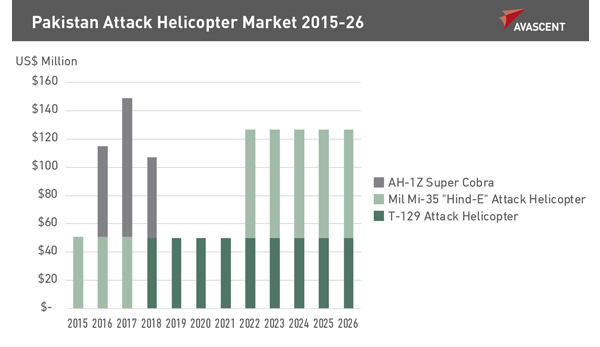 On October 20, the South Korean Air Force announced its intention to create an intelligence, surveillance and reconnaissance (ISR) unit starting December 1, as the Air Force is set to acquire the first two RQ-4 Global Hawk UAVs in 2018. South Korea is acquiring a total of four units, with the remaining two delivered by 2019. The Defense Security Cooperation Agency approved the sale of the UAVs in 2012, and a contract was officially awarded to Northrop Grumman in 2014 worth $657.4 million. The RQ-4s will be used alongside South Korea’s Peace Eye airborne early warning and control aircraft to monitor North Korea’s activities.

On October 20, Germany approved the EUR 1.5 billion ($1.76 billion) sale of three Dolphin-II Class attack submarines by Thyssenkrupp to Israel. According to the memorandum of understanding, 27 percent of the cost of the submarines ($476 million) will be subsidized by the German government. The deal was postponed in July 2017 following corruption allegations and ongoing investigations in Israel.

Frustration continues to build between India and Russia over the joint fifth generation fighter aircraft development. After several years of increasing concerns over lack of progress, rising cost projections, and unfulfilled requirements, the Indian Air Force (IAF) has argued that the $10 billion project should be discontinued. The project has been waylaid by continued IAF concerns that it does not meet desired stealth, engine, or indigenous sustainment capabilities. The program was originally budgeted for $5 billion to deliver 108 Su-57 (PAK FA/T-50) derivatives to the IAF, but recently the Russian government has raised their required Indian investment to $7 billion. If the project were to be canceled, it would free up substantial funding that would likely be used to support the single engine fighter acquisition as well as research and development for the Advanced Medium Combat Aircraft, India’s planned indigenous fifth generation fighter.

Australia’s Defence Innovation Hub has released a third set of contracts worth a combined value of $4.4 million. A $2.1 million contract was awarded to L3 Oceania to explore development of underwater acoustic sensors. Another $1.6 million contract was awarded to the University of Newcastle to explore virtual reality based training to improve resiliency training. Several smaller contracts were awarded for work on unmanned ground vehicles, biological threat detectors, and cyberattack resilient software. Previously, the Defence Innovation Hub awarded two other sets of contracts in June and July of this year worth a combined $10.3 million. The Defence Innovation Hub is a $478 million effort by the Australian DoD’s Defence Science and Technology Group to support innovation within Australian business, particularly small- and medium-sized enterprises.

Egypt may exercise an option on a previous purchase from France which would enable it to buy twelve more Dessault Rafale fighters and two DCNS Gowind 2500 corvettes. This would constitute a follow-on purchase from the sale of fighters, corvettes, and other surface vessels to Egypt in 2015. Currently, Egypt has eleven Rafale fighters and one active Gowind corvette, both from the 2015 sale. However, Egypt will need to secure credit to finance exercising this option.

On October 19, Vector, an Arizona-based launch company that is developing small launch vehicles, announced that it signed an agreement with the Virginia Commercial Space Flight Authority to conduct its first orbital launches in 2018 from the Mid-Atlantic Regional Spaceport on Wallops Island. The agreement is for three launches of the Vector-R rocket to take place over the next 24 months, with options for five additional launches. The inaugural launch could occur as soon as July 2018. Avascent currently projects that Vector will conduct two orbital launches in 2018 and five in 2019, barring unforeseen development delays.

The Weekly Wire: For Your Situational Awareness 10.19.17Weekly Wire

The Weekly Wire: For Your Situational Awareness 11.2.17Weekly Wire