The Weekly Wire: For Your Situational Awareness 10.5.17

On September 27 at the 68th International Astronautical Congress in Adelaide, Australia, NASA and other International Space Station partner nations discussed the future of ISS operations beyond 2024. While there were disagreements as to whether the ISS will cease operations in that year, there was consensus that should space station operations be extended beyond 2024, decisions to that effect must be made by 2018 or 2019 at the latest so that users of the station can plan accordingly. 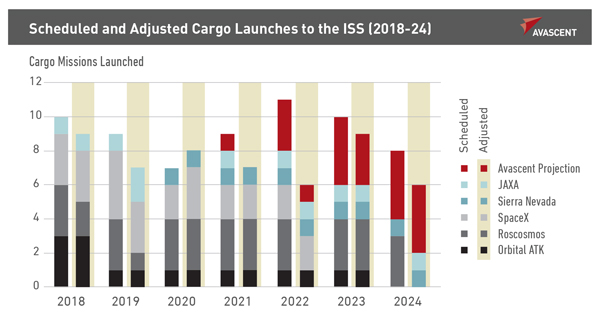 The graph above displays the scheduled and adjusted cargo launches to the ISS from 2018 through 2024. The scheduled launches will occur according to stated launch manifests. The adjusted launches show Avascent’s analysis of how market realities will affect those manifests and forecasts which launches will be delayed and which ones will continue as scheduled.

On September 27, India’s Defence Acquisition Council (DAC) approved deals for the Indian Navy worth an estimated $29 million. The DAC approved the procurement of upgraded sonars for India’s surface fleet. The sonars will be developed domestically by the Defence Research and Development Organisation and the Naval Physical and Oceanographic Laboratory in Kochi. India also cleared the acquisition of Klub missiles deployed on the country’s Kilo-class submarines, Talwar and Shivalik-class frigates, and Kolkata-class destroyers. In the official press release, India emphasized the acquisitions would boost the Navy’s anti-submarine warfare capabilities.

On September 27, the UK Royal Navy confirmed that the second Type 26 frigate will be named HMS Belfast. BAE Systems was awarded a £3.7 billion ($4.9 billion) contract in July 2017 for the first three of eight frigates. HMS Glasgow, the first ship in the class, is due to enter service in 2026 with HMS Belfast scheduled to follow 15 to 18 months later.

The last HMS Belfast served from 1938 to 1963 and is currently a floating museum on the River Thames, raising the possibility that both ships could appear side by side in the future.

On September 27, Rheinmetall announced it received a €118 million ($138.7 million) contract from Germany to upgrade 104 Leopard 2 Main Battle Tanks to the Leopard 2A7V standard. 68 Leopard 2A4s, 16 Leopard 2A6s, and 20 Leopard 2A7s are to be upgraded with first deliveries planned for 2020. The upgrade will include enhancements to the fire control system as well as the addition of a new laser rangefinder and thermal imaging device.

The 68 Leopard 2A4s will also have their current L44 44 caliber 120mm smoothbore guns replaced with the longer L55A1 55 caliber gun, enhancing firepower, and ensuring that all 104 tanks will be capable of firing Rheinmetall’s programmable DM11 multipurpose round.

On October 1, Latvia received the first batch of M109 howitzers from Austria. Latvia purchased the howitzers secondhand from Austria following a bilateral agreement signed in April 2017. Austria will deliver all 47 M109s before the end of 2017, with costs per unit ranging from $70,400-$164,300. The M109s underwent modifications from 2003 to 2007, but were put in storage shortly after. Latvia is following in the footsteps of Estonia and Lithuania, both of which have purchased self-propelled howitzers, as regional tensions with Russia continue.

On October 2, a key decision was made for Australia’s $26 billion SEA 5000 Future Frigate project with the selection of the Aegis Combat System. Aegis beat Saab’s 9LV combat management system, which is already in service in the Royal Australian Navy on the Anzac-class frigates and Canberra-class landing helicopter docks. More importantly, the 9LV was not selected even though it is already integrated with the Australian-designed CEAFAR2 radars. As part of Australian efforts to maximize local involvement in the defense supply chain, the CEAFAR2 radar is mandated as a required system for the future frigate, even though the prime contractor has not yet been selected. The CEAFAR2 radar is produced by Canberra-based CEA Technologies. Although Aegis has not yet been integrated with CEAFAR2 radars, Saab Australia was selected to design an Australia specific interface for the Aegis combat system so that the system could work with the radar. The future frigate and Hobart air warfare destroyers are expected to perform task group defense roles, covering missile, air, surface, and sub-surface threats.

The United Arab Emirates is seeking to buy at least twelve Su-35 fighter aircraft from Russia. While the initial outline agreement was signed in February 2017, the exact number is still being negotiated, but a contract could be signed before the end of the year. Russia and the UAE also signed a military industrial cooperation agreement in April. The new aircraft will likely serve as a complement to the UAE’s existing fleet of F-16s and Mirage 2000s.

As ballistic missile threats have risen on the Korean Peninsula, the Pentagon requested that Congress redirect $416 million in funding to missile defense programs. The request was made after Army and Army Reserve Operations and Maintenance funding was not obligated due to delays with the 2017 budget. The move would not only add $136 million to increase the number of ground-based interceptors and silos from 44 to 64 in Alaska, but also accelerate Aegis BMD upgrades, SBX funding, and other funding to support Alaska-based missile intercept missions. Unsurprisingly, Sen. Dan Sullivan, R-Alaska, has emerged as an early supporter, but any change is unlikely due to legislators’ traditional unwillingness to redirect appropriations, viewing that as an encroachment upon Congressional priorities.

The Weekly Wire: For Your Situational Awareness 9.28.17Weekly Wire

The Weekly Wire: For Your Situational Awareness 10.19.17Weekly Wire