The Weekly Wire: For Your Situational Awareness 11.16.17

The Argentine Navy has signed a contract for five Dassault Super Étendards Modernisé 5 aircraft worth $14.5 million. The aircraft have been retired by France, and were built between 1978 and 1982. Argentina currently fields two Étendards that are near retirement, and keeps nine in storage for spare parts. The Étendard has long been a mainstay in the Argentine Navy. It played a prominent role during the Falklands War, sinking two British ships. The new aircraft will strengthen a fighter aircraft fleet that is in bad shape. The Argentine Air Force is set to retire its only fighter aircraft, the A-4 Skyhawks, in 2018 for budget reasons. 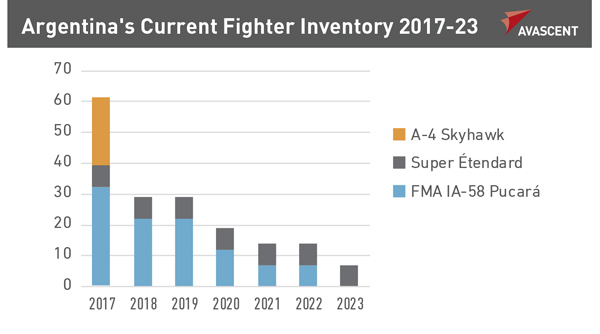 On November 10, the Canadian government, alongside primary contractor Irving Shipbuilding, extended the deadline to submit request for proposals (RFP) to design the country’s surface combatants to November 30. The RFP submission date was originally April 27, 2017, but has been extended several times since that initial deadline. According to Public Services and Procurement Canada, the decision to delay the submission date again was due to defense firms wanting additional time to finalize their bids. The Canadian Ministry of National Defence plans on procuring a total of 15 surface combatants that will replace the country’s Iroquois destroyers and Halifax frigates. As of now, the project is slated to cost $31 billion; however, a report released by Canada’s Parliamentary Budget Office earlier this year stated that the project could cost as much as $46 billion. The original budget estimate for the project was $20 billion. A contract to design the combatants is expected to be awarded in 2018, with construction set to begin in the early 2020s.

According to reports, the government of Japan will not make a decision about the continued development of the F-3 fighter until after 2018. The Japanese government must decide if the F-3 will stay a completely domestic program or be opened to international collaboration. This delay means that the F-3 will likely not be included as a core program under Japan’s next five-year defense equipment plan, raising questions about the future of the program. The F-3 is an important project since the development of a new fifth generation fighter would benefit domestic industries and enhance the ability of Japan’s armed forces to counter threats emanating from China and North Korea. However, Japan is also buying a great deal of military hardware from the United States and will continue to do so moving forward, despite its ambitions to bolster its domestic industry.

The United Arab Emirates signed a $1.63 billion F-16 upgrade deal with Lockheed Martin at the Dubai Air Show. The deal encompasses the UAE’s 80 F-16 Block 60s and includes the installation of a new core processor. The Desert Falcons have long been a source of pride for the Emirati Air Force since their deliveries began in 2004, as their integration of AESA, conformal fuel tanks, and integrated EW systems made them the most advanced F-16 variant in the world. Due to the relatively small cost of $20 million per aircraft (assuming an even distribution of contract value over the fleet) and young airframe age, Avascent Analytics projects that this upgrade program will consist primarily of processor installation and integration, avionics upgrade, and EW modernization.

Given the UAE’s newly unveiled F-35 discussions, it is also likely that this deal was used to promote US-UAE economic and military ties to the export-focused Trump Administration. Meanwhile, the deal is expected to counterbalance some concerns about a potential UAE pivot toward Russian aircraft providers after the UAE signed a deal with Rosobornexport for fifth generation fighter development.

Donald Trump’s recent Asian tour sparked discussion again over the possibility of South Korea building a nuclear-powered submarine (SSN). South Korean President Moon Jae-In has stated that an SSN is necessary in light of North Korea’s nuclear weapons and missile progress. The rationale behind such an acquisition is that an SSN’s endurance allows it to stay out at sea on missions longer than a conventionally-powered submarine. SSN’s are also generally faster than conventionally-powered submarines, and can better respond to new intelligence as it is received. North Korean development of a ballistic missile submarine makes such rapid response particularly desirable. However, developing an SSN in South Korea would be a daunting and expensive undertaking. Some South Korean officials are discussing the purchase of an SSN from the US, then using the technology to jump-start a local development program, however this seems unlikely as the US has never sold the SSN internationally, leaving only France or the UK to consider. There are other policy hurdles that would have to be overcome as well, including the Non-Proliferation Treaty, the US barring South Korea from enriching uranium for military purposes (separate from the Non-Proliferation Treaty), and the 1991 inter-Korean denuclearization declaration.

On November 12, an Orbital ATK Antares 230 rocket successfully launched the Cygnus cargo spacecraft to the International Space Station (ISS), where it berthed on the Unity module’s Earth-facing port on November 14. Cygnus is on a supply mission called “OA-8” carrying more than 3,300 kg of cargo, including crew provisions, station hardware, and cubesats, such as the E.coli AntiMicrobial Satellite (EcAMSat) mission, the Integrated Solar Array and Reflectarray Antenna (ISARA), and the Optical Communications and Sensor Demonstration (OCSD) project.

The Antares 230 placed Cygnus into a slightly higher orbit than planned, which could indicate that the rocket may be able to carry slightly heavier payloads on future missions. Orbital ATK launched its previous two ISS resupply missions on United Launch Alliance’s (ULA) Atlas 5 rockets. However, the company currently has no announced plans to contract with ULA for future resupply missions.

The Weekly Wire: For Your Situational Awareness 11.9.17Weekly Wire

The Weekly Wire: For Your Situational Awareness 11.30.17Weekly Wire