The Weekly Wire: For Your Situational Awareness 11.9.17

On November 3, the Norwegian government announced that the first three F-35s were delivered to Ørland Air Base. Norway is purchasing 52 F-35A aircraft as a replacement for its current inventory of F-16s, and aims to phase out the latter by 2021. Lockheed Martin also delivered F-35 simulators in advance of the new aircraft’s arrival to help facilitate pilot training. 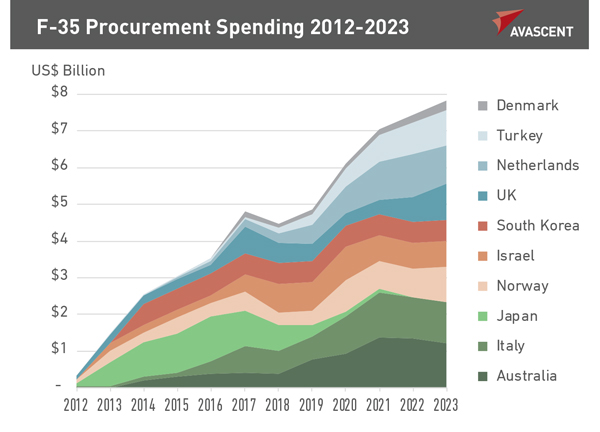 Saab continues to increase its presence in India by entering into a joint venture with the Adani Group. On November 5, the two conglomerates announced their joint focus on production of unmanned aerial vehicles and helicopters as well as various aerospace products for the Indian Armed Forces. This follows a September agreement in which Saab offered to build the Gripen in India with collaboration from the Adani Group. The Gripen is being offered for the Indian Air Force’s $13 billion fighter jet competition, alongside Lockheed Martin’s F-16s.

On November 7, Sweden announced that it selected Raytheon’s Patriot system to replace its HAWK air defense system. The announcement stated that the program will be worth approximately SEK10 billion ($1.2 billion), suggesting that two Patriot batteries will be acquired. Each battery will consist of three launchers, armed with both Raytheon PAC-2 GEM-T and Lockheed Martin PAC-3 interceptors. This will provide the hit to kill capabilities of PAC-3 for aircraft and ballistic missiles while also having the high explosive warhead and proximity fuse capability of PAC-2 GEM-T against rockets and cruise missiles.  The announcement signaled the start of negotiations with the United States that will lead to a Foreign Military Sales notification. Sweden selected Patriot over Eurosam’s SAMP/T system, with the European consortium once again missing out after Patriot was also selected by Poland. Patriot will join Diehl’s IRIS-T SLS system, replacing HAWK and RBS70 respectively as the new Swedish air and missile defense systems.

The Trump Administration has signaled a potential significant shift in Middle Eastern policy, by considering the sale of the F-35 to the United Arab Emirates. The UAE has sought the F-35 since 2011, but has been blocked by the US due to an agreement to preserve Israel’s Qualitative Military Edge (QME). For the past decade, one of the major underpinnings of Israel’s QME was its position as the only F-35 partner nation in the Middle East. However, this policy seems to have shifted since high level talks between the US and UAE took place in May, as the US seeks to stabilize the region amid the Qatari diplomatic crisis.

The move is also a potential gamechanger for the Middle Eastern fighter market. The mid-to-late 2020s have emerged as a potentially strong bear market as F-15SA, Eurofighter, and Rafale deliveries conclude without obvious follow-on procurements. Avascent Analytics believes that recovery in the market would largely hinge upon whether the F-35 would become more widely available for export as customers would likely be unwilling to pursue another regional fighter race without significant capability improvement. The market would be particularly attractive for the F-35 as regional customers will likely pursue fighter-bomber replacements instead of traditional air dominance fighters, competitions for which the F-35 is better suited.

Vietnam is reportedly in discussions with Russia on the license production of an additional four Project 1241.8 Molniya-class corvettes. The earliest contract for the vessels was signed in 2004, which included two corvettes from Russia, as well as design and technical support for the construction of 10 more corvettes in Vietnam. Vietnam has license produced six vessels between 2010 and 2016. While these corvettes have been armed with indigenously built versions of the Kh-35 subsonic anti-ship cruise missile, this upcoming batch could potentially carry the Russian made 3M54E Klub anti-ship cruise missile, which is more advanced compared to Vietnam’s Kh-35. Each vessel can cost up to $130 million. Despite recent Vietnamese efforts to diversify defense suppliers, Russia still has a strong hold on the Vietnamese naval market. In addition to these newer Molniya-class corvettes, Vietnam may acquire an two additional Gepard-class frigates from Russia.

Pakistan has placed an order for two corvettes from Swiftships in the United States. Although the financial value of the award was not disclosed, Avascent Analytics estimates the two ships will cost over $400 million. The Pakistan Navy is in the process of replacing its aging fleet of small surface ships, which consists of six Type-21 frigates built in the UK in the 1970s. The Swiftship order follows the procurement of two offshore patrol vessels from Damen Shipyards this past summer for an estimated value of $113 million. Pakistan signed a letter of intent with Turkey’s STM Defense Technologies to co-produce four new MiLGEM frigates worth $1.5 billion.

On November 2, the Department of Defense announced that both the Navy and the Army’s Cyber Mission Force (CMF) Teams reached full operational capability (FOC), nearly a year ahead of their goal to have the teams fully up and running by 2018. Cyber Command confirmed that the Army’s 41 teams achieved FOC on September 28, followed by the Navy’s 41 teams on October 6. Achieving this status means that both teams have been fully trained, staffed, and equipped to conduct both offensive and defensive missions outlined by DoD. In addition to the Navy and Army CMF, the Air Force also contributes 39 teams to the total force, though their FOC isn’t expected until summer 2018. In a statement, Vice Adm. Michael Gilday, Commander of the Navy’s 10th Fleet/Fleet Cyber Command said, “Reaching FOC at this point in the development of the Navy’s CMF teams is a testament to the extraordinary hard work invested in manning our teams and training our personnel,” but he cautioned, “the true challenge will be sustaining readiness and the prompt ability to ‘answer all bells’ when directed by U.S. Cyber Command.”

United Launch Alliance (ULA) has postponed the launch of the Joint Polar Satellite System (JPSS) 1 satellite until at least November 14 due to a battery malfunction in its Delta 2 rocket. Scheduled to take off on November 10 from Vandenberg Air Force Base, JPSS-1 had already been pushed back at least twice from its original launch date of January 2017. The Delta 2’s final mission will be of NASA’s Ice, Cloud and land Elevation Satellite-2, which is currently scheduled for a launch in 2018 from Vandenberg AFB.

The Weekly Wire: For Your Situational Awareness 11.2.17Weekly Wire

The Weekly Wire: For Your Situational Awareness 11.16.17Weekly Wire