The Weekly Wire: For Your Situational Awareness 2.8.18

On February 2, India released its 2019 federal budget. The defense budget has been allocated $57 billion, an eight percent increase in nominal terms over 2018, and second only to China in the Indo-Pacific. Procurement and research and development funding will exceed $13.2 billion. Despite impressive toplines, the budget continues the trend of declining defense investment relative to manpower accounts. Procurement represents 23 percent of the 2019 defense budget, down from 32 percent in 2013. This comes at an important time in India’s defense modernization, and partly explains India’s patience in price negotiations and willingness to delay or cancel awarded contracts. 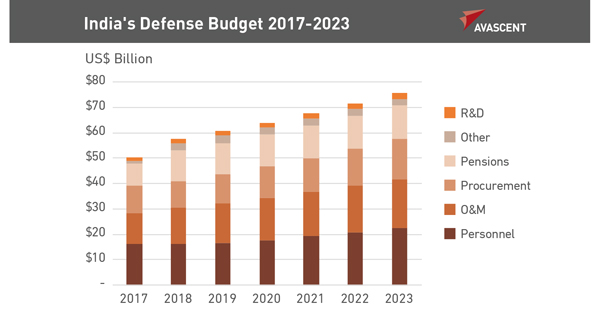 As tensions in Europe continue to rise, Denmark passed a major cross-party agreement that will significantly raise defense spending above its current 1.3% of GDP in order to approach NATO spending targets by 2024. The deal would see Denmark’s spending rise twenty percent between 2018 and 2023 to $4.6 billion. Significant investment efforts would be spread across all of the major services. The Army would see the establishment of a new Rapid Response Brigade, potentially an expansion of the Danish Division, the creation of a light infantry battalion, and the transformation of mobilization companies to combat battalions. Special Operations would see their budget grow to reach $48 million annually. Meanwhile, the Navy will likely request a major overhaul of its Iver Huitfeldt-class frigates to grant them Aegis-like capabilities for air and ballistic missile defense, as well as significant anti-submarine warfare investments. Finally, the Danish Armed Forces expect “cyberwarfare-type threats (to become) a fundamental focal point” and have earmarked at least $233 million in cyber funding.

On February 2, US Air Force Secretary Heather Wilson spoke at Hawaii’s Joint Base Pearl Harbor-Hickam about the need for more Air Force personnel as the release of the National Defense Strategy shifts focus from counterterrorism operations to threats emanating from Russia and China. Secretary Wilson discussed the plan to increase personnel by 7,000 this fiscal year with the hopes of maintaining personnel increases over the next five years. In a statement written to the Senate Armed Services Committee in June 2017, Secretary Wilson alongside Chief of Staff of the Air Force General David Goldfein highlighted pilot retention as one of the issues plaguing the service. The Air Force is looking to reach an end strength of 350,000, adding approximately 29,000 personnel over the next several years. Additionally, the Air Force will continue to request funding for some of the top acquisition programs for FY 2019: the KC-46, F-35, and B-21 programs. Secretary Wilson has been traveling throughout the Pacific, making stops in Guam, the Philippines, South Korea, and Japan in her first official tour of the region.

On February 5, the U.S. Defense Security Cooperation Agency announced the sale of several different missile systems for the Finnish Navy. The announcement has two parts, one of which covers the sale of 68 Evolved Seasparrow Missiles (ESSM) while the other covers the purchase of a total of 132 Harpoon missiles. The ESSMs will be used with Finland’s 2020 class corvettes and the Harpoon missiles will be used with the Hamina-class ships, multirole corvettes, and coastal missile batteries. While the deal has not been finalized, it could be worth upwards of $730 million. Finland is seeking this sale due to concerns about growing Russian activity in the region.

On February 6, the Philippines signed a deal with Canadian Commercial Corporation for 16 Bell 412EPI utility helicopters. Canadian Commercial Corporation is licensed to sell the aircraft. The purchase is part of Horizon 2, a broader modernization plan for the Armed Forces of the Philippines. Over $233 million has been allocated for this acquisition. These aircraft are urgently needed to replace secondhand, Vietnam War-era UH-1 helicopters that have been operating extensively against ISIS militants in the southern Philippine city of Marawi. Delivery of the 16 aircraft will begin in 2019 and are expected to be completed by the following year. The Philippines previously took delivery of eight Bell 412EP aircraft in 2015. Philippine acquisition of helicopters is expected to continue in order to replace aging aircraft and expand counter-insurgency capabilities. President Rodrigo Duterte expressed interest purchasing as many as 23 attack helicopters in a statement last November.

The Weekly Wire: For Your Situational Awareness 2.1.18Weekly Wire

The Weekly Wire: For Your Situational Awareness 2.15.18Weekly Wire