The Weekly Wire: For Your Situational Awareness 9.28.17

Saab is looking to increase sales of the JAS Gripen-E by expanding its presence in Europe, South America, and Asia by offering to provide technology transfers and collaborate with indigenous firms on the production of Gripen-Es. Saab’s original sales estimate for the next generation fighter ranged between 150-200 units over 15 years, though the company is now looking to sell 300-500 units in the same timeframe. Saab’s first customers of the fighter include Sweden and Brazil, with both countries expected to receive their first delivery in 2019. Brazil is acquiring 36 fighters for $5.34 billion while Sweden is converting 60 Gripen-Cs to the E variant for $2.8 billion. Saab has also established a relationship with India’s Adani Group with the hopes of selling the Gripen-E to the Indian Air Force. The Gripen-E’s maiden flight took place in Sweden on June 15, 2017. 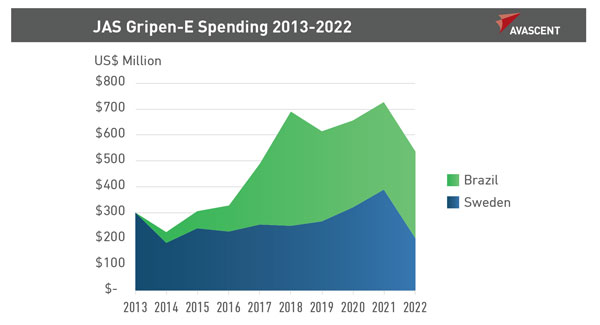 On September 20, the Czech Defense Ministry unveiled its plan to modernize the army by 2026. The $5 billion plan is highlighted by the $2.1 billion acquisition of infantry fighting vehicles to replace aging BYP-2s. The contract has been highly anticipated within industry as companies such as BAE and General Dynamics Land Systems have spent the last few months coalescing their partnership strategy with Czech firms. The modernization effort is part of a rapid governmental shift to increase spending on the Czech military to counter perceived Russian aggression in Ukraine, which resulted in defense budgets rising faster than expected for the last two years. This trend is likely to accelerate if, as expected, the ANO’s political victory in the October parliamentary elections, which would portend a Czech military budget that reaches 2% of GDP by 2024.

On September 22, Egypt received the first of four Gowind 2500 corvettes from France’s Naval Group. The delivery comes three years after Cairo signed the initial $1.36 billion contract. The new boats will replace the Egyptian Navy’s two Abu Qir-class corvettes, procured from Spain in the early 1980s, and will be equipped with VL-MICA air-defense missiles and Exocet MM40 anti-ship and land-strike missiles. The corvette deal is part of Egypt’s effort to diversify among defense suppliers for strategic platforms. The Air Force is in the process of receiving 50 MiG-29M fighters from Russia worth $2 billion, in addition to a $2.1 billion deal for 24 Rafale combat aircraft from Dassault.

On September 25, it was reported that Lockheed Martin won a $53 million contract to provide Mk48 CBASS torpedo kits to Australia, the Netherlands, Canada, Turkey, and the United States. The contract specifically involves upgrades to the torpedoes sonar, guidance, and control systems. 65% of the contract is going towards the US Navy, 23% towards the Netherlands, 11% towards the Royal Australian Navy, and less than 1% to both Canada and Turkey.

On September 25, Airbus received an order from the Organization for Joint Armament Procurement for five A330 Multi Role Tanker Transports (MRTT) on behalf of the NATO Support and Procurement Agency. Germany and Norway will jointly fund the purchase, which will become part of the Multinational Multirole Tanker Transport Fleet (MMF). This latest addition would bring the number of A330 MRTTs in the fleet to seven, with the first two being purchased jointly by the Netherlands and Luxembourg. At the time of signing for the first two A330 MRTT, options were set in place for an additional six aircraft, bringing the potential total to eight. However, this latest order includes options for an additional four aircraft, which could expand the MMF fleet to eleven. This suggests that more A330 MRTT may be procured later date if more countries join the MMF program.

The Turkish government has accused Germany and the United States of indirectly executing an arms embargo against the country as deliveries of spare parts for weapons systems have grounded to a halt. These delays come at a time when the United States and Turkey have been at odds over US support of Syrian Kurds in anti-ISIS operations, while Germany raised multiple allegations surrounding potential human rights violations by the Turkish government in the aftermath of the July 2016 attempted coup. Meanwhile, Russia has sought to exploit these differences by expanding its defense ties with Turkey, highlighted by the recent sale of S-400s.

On September 25, an official from the Chinese National Space Agency confirmed that the failure of a Long March 5 earlier this year would delay the launch of China’s Chang’e 5 lunar sample return mission, which had been scheduled for later this year and the Chang’e 4 lunar lander mission, which had been scheduled to launch in 2018. Additionally, cascading delays may push back the launch of the Tianhe module that is intended to form the core of China’s LEO space station. Currently, Avascent projects that China will conduct four Long March 5 launches through 2020, including the country’s Mars Orbiter.

The Weekly Wire: For Your Situational Awareness 9.21.17Weekly Wire

The Weekly Wire: For Your Situational Awareness 10.5.17Weekly Wire