The Weekly Wire: For Your Situational Awareness 3.23.17

On March 16, Boeing received a $3.2 billion contract modification that will transfer new and remanufactured AH-64E’s to Saudi Arabia, as well as associated training and technical equipment. All work is expected to be complete by June 2022. This contract will support the Saudi Arabian National Guard’s (SANG) effort to build up a force of helicopters as part of a broader SANG modernization program. The modernization is just one facet of Saudi Arabia’s Vision 2030 program, a sweeping national initiative to diversify the Saudi economy. SANG has around 40 helicopters in service, including AH-64E Apaches, UH-60M Blackhawks, and AH-6i’s, but had no combat helicopters in service at the beginning of 2015. The Guard ultimately plans to operate 156 helicopters. According to a DSCA news release from October 2010, a notification of a possible sale of 156 rotorcraft to Saudi Arabia included 36 AH-64D, 72 UH-60M, 36 AH-6i, and 12 MD-530F helicopters. 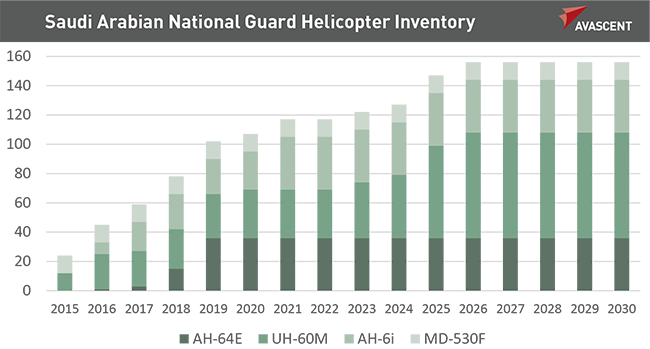 On March 14, Turkey announced that it will seek a loan from the government of Russia to purchase an undisclosed number of weapon systems, including S-400 (SA-21 Growler) air defense missile systems. Turkey has been searching for a long-range air defense system since it cancelled the Turkish Long-Range Air and Missile Defense System (T-LORAMIDS) program in November 2015. Ankara initially caused a stir when it selected the Chinese-origin HQ-9 for the program over the Russian S-300, Franco-Italian SAMP/T Aster 30, and Lockheed Martin-Raytheon Patriot PAC-2. Pressure from Western allies led to the cancellation of the award and re-tender. Prior to the March 14 announcement, the S-400 was competing with systems created by Thales/MBDA, Lockheed Martin, and the MEADS Consortium – and there were significant concerns about the cost of the Russian system. At present, it is unclear as to whether a loan will be offered by Russia.

On March 15, Romania announced its plan to procure twenty more F-16 fighter aircraft from the United States. Romania has already bought 12 used F-16s from Portugal, with the first nine delivered in 2016 and the final three expected in September 2017.  The F-16s are meant to replace Romania’s Soviet-era MiG-21s and provide the Romanian Air Force with NATO-compatible fighter aircraft. The additional procurement comes as Romania significantly increases its defense spending, going from a $2.9 billion defense budget (1.5% of GDP) in 2016 to a $3.9 billion budget (2% of GDP) in 2017. The 42% growth in spending is largely driven by Russia’s aggression in the region and Romania’s desire to more deeply commit to NATO.

On March 15, Saab announced that the Gripen E (also known as the JAS-39E) remains on track for its debut flight before the middle of the year. The Swedish Air Force is currently acquiring 60 JAS-39Es as outlined by the 2016-2020 Swedish Defense Policy, with deliveries to be completed by the mid-2020s. Sweden also has the option to procure an additional 10 units based on the recommendation of the country’s Defense Commission. However, a decision to finalize procurement of additional combat aircraft is not expected in the near term. Saab has also been expanding its reach beyond Sweden and into South America: the firm was awarded a contract in 2014 to supply the Brazilian Air Force with 36 next-generation Gripens worth $5.34 billion. More recently, the Swedish Minister for Enterprise and Innovation signed a defense agreement with the Colombian government on March 15, which Saab hopes will open the door to further Gripen exports in the region.

On March 14, the US Air Force (USAF) announced that SpaceX won a $96.5 million contract to launch the third GPS-III navigation satellite from Cape Canaveral, FL. Space X won the bid against United Launch Alliance (ULA), in their first head-to-head Evolved Expendable Launch Vehicle (EELV) program competition. In April 2016, ULA declined to bid against SpaceX for the USAF’s first GPS-III satellite launch, enabling SpaceX to win its first EELV contract by default for $82.7 million. That price was about half what ULA would historically charge for an Atlas 5 launch: the company, a joint venture between Boeing and Lockheed Martin, has been the sole launch provider of military satellites for the past decade, whereas SpaceX received certification to launch military satellites in 2015. The recent contract announcement is one of nine launch contracts the Department of Defense says it will award through fiscal year 2017, six of which will be GPS-III satellites. SpaceX’s first GPS-III launch is scheduled for May 2018 aboard its Falcon 9 rocket.

The Weekly Wire: For Your Situational Awareness 3.16.17Weekly Wire

The Weekly Wire: For Your Situational Awareness 3.29.17Weekly Wire