The Weekly Wire: For Your Situational Awareness 4.5.17

On March 31, the Australian Department of Defence released the Request for Tender (RFT) to the three shortlisted designers for the Future Frigate program (Project SEA 5000 Phase 1): BAE Systems, Fincantieri, and Navantia. BAE Systems is offering its Type 26 frigate, Fincantieri its FREMM frigate, and Navantia a modified F100 design. All three are reaching out to Australian industry to build up a supply chain, as the Australian government has placed a strong emphasis in Australian industry involvement in major defense acquisitions. The project will acquire nine frigates to replace the eight ANZAC-class frigates currently in service. An announcement of a winner is expected by April 2018 for construction to begin in 2020. The project is estimated to cost $26 billion and to introduce the first frigates into service in the late 2020s. The Future Frigate program is part of a larger shipbuilding plan worth over $66 billion that will see the construction of nineteen Pacific Patrol Boats, twelve offshore patrol vessels, nine frigates, and twelve submarines. 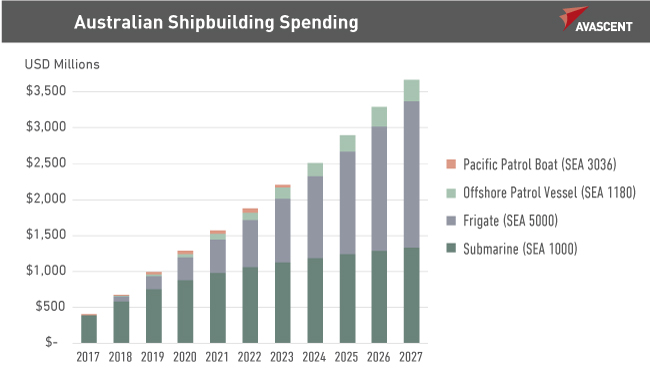 On March 27, Brazil classified the Caçador (“Hunter”) unmanned aerial vehicle (UAV) a “strategic defense product” – the first Brazilian UAV to receive the designation. Caçador is a Class 4 UAV produced by Brazil’s Avionics Services in cooperation with Israel Aerospace Industries (IAI). A variant of IAI’s Heron I, the Caçador is designed for medium-altitude, long-endurance operations, and reflects Brazil’s desire to develop an indigenous industrial base for unmanned systems. Its first flight took place in July 2016. The “strategic defense product” designation signals that the Caçador project will continue despite Brazil’s economic woes. Avascent Analytics expects Brazil’s modernization efforts to weather budgetary pressure in the next five years, with personnel and O&M absorbing the most cuts to defense.

Also on March 27, the Finnish government sent a preliminary request for information on weapons and other related equipment for the HX Fighter project, which is Finland’s program to replace its F/A-18 fighters. Finland currently operates 61 F/A-18C/D Hornets, but plans to decommission the fighters from 2025 to 2030. The project is slated to acquire about 64 aircraft for up to $10 billion.  However, it is still in its early stages, with a decision not expected until 2021. Finland has received five responses for the HX competition so far: from Boeing, Dassault Aviation, BAE Systems, Lockheed Martin, and Saab. The program is part of a broader modernization across the Finnish Defense Forces. The HX acquisition program is part of a larger, $2 billion plan that includes the acquisition of a new surface combatant and a potential 20% increase in end strength to 280,000 soldiers.

On March 28, Malaysian Prime Minister Najib Razak announced that he had discussed the potential purchase of Dassault’s Rafale fighter jet with French President Francois Hollande during Hollande’s trip to Malaysia, but that no decision had been made. Malaysia is interested in purchasing up to 18 new multi-role combat aircraft to replace its fleet of ten MiG-29s in a deal that could be worth over $2 billion. Malaysia issued an initial request for proposals in March 2011, but the government has yet to make a final decision, and Defense Minister Hishammuddin Hussein has resisted rushing towards a signing. A decision is expected by 2020. The defense minister was previously reported to have said that the competition has narrowed to either the Rafale or the Eurofighter Typhoon, but then backtracked on those statements. In 2016, Malaysia awarded France’s DCNS a contract for the refit of its two Scorpene-class submarines in a joint venture with Malaysia’s BHIC Defence Technologies. Malaysia has also purchased four A400Ms from Airbus, becoming the first non-NATO member to acquire the aircraft.

The US State Department approved the sale of 19 F-16s to Bahrain on March 29, overturning the Obama Administration’s condition that the sale would only move forward if the country improved its human rights record. Congress has the final decision on approval of the sale after the State Department’s notification. The total value for the 19 F-16s would be $2.7 billion. It is unclear whether this new deal also includes an upgrade to Bahrain’s existing F-16 fleet, in which case the combined cost of procuring new F-16s and upgrading the existing fleet could rise to $4.8 billion. If the US moves forward with upgrading Bahrain’s current F-16s, the aircraft would receive new engines, radars, ordnance, and avionics, though it is unclear how many aircraft would be upgraded. The initial sale to Bahrain was part of a larger one that included the sale of up to 72 F-15s to Qatar and 32 F-16s to Kuwait last year.

Building on the success of last week’s Falcon 9 launch, SpaceX announced that Falcon Heavy will launch this summer with two pre-flown boosters. Initially, SpaceX saw Falcon Heavy as an easy goal. Designers assumed they could use two first stages as strap-on boosters in conjunction with an unaltered center core. This has proven not to be the case as the center core has had to be redesigned and additional hardware has been installed. Despite its delayed production timeline, SpaceX still plans to recover all the boosters from Falcon Heavy’s first launch. The two side boosters will land at Cape Canaveral Air Force Station and the center core will return to a drone ship in the Atlantic. Once repairs to Cape Canaveral’s Space Launch Complex-40 (SLC-40) (the pad damaged in the September 2016 Falcon 9 fueling explosion) are complete, SpaceX plans to use SLC-40 for Falcon 9 missions and Launch Pad 39A for Falcon Heavy. SpaceX currently also launches from Vandenberg AFB’s Launch Complex-4. The company expects to have its commercial spaceport in Boca Chica, TX operational in 2018, however significant delays are possible.

The Weekly Wire: For Your Situational Awareness 3.29.17Weekly Wire

The Weekly Wire: For Your Situational Awareness 4.12.17Weekly Wire