The Weekly Wire: For Your Situational Awareness 5.18.17

On the evening of May 9, the Australian Treasury presented the national budget for 2017-2018. The Department of Defence saw its budget increase to $25.4 billion, a roughly 6% increase from last year. After taking into account capital receipts and the Defence Department’s own source revenue, total defense funding is about $25.9 billion.  Defense spending is now projected to reach 2% of GDP by 2021, three years earlier than initially projected by the Australian government. Defense procurement is expected to grow substantially to account for the acquisition of 72 F-35 fighter aircraft, a $60 billion naval shipbuilding program, and a wide range of other programs under the $147 billion Integrated Investment Program over the next decade. Two prominent areas of cuts are funding for contractors and for business travel. Reductions in civilian civil servants are also planned this year, though this will be offset by an increase in uniformed personnel. 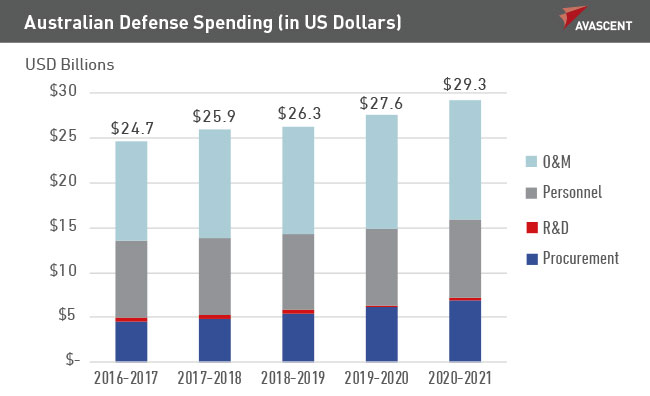 On May 5, France awarded DCNS an $80 million contract to modernize three of the five La Fayette frigates for the French Navy. Work will begin in 2020, with the first upgraded vessel planned for delivery in 2021. The financial value of the award was not disclosed. DCNS will renovate the ship structure and computer systems that manage propulsion and steering. Additionally, DCNS will add anti-submarine capabilities, two SADRAL anti-aircraft launchers, and a new main combat system based on the system used on the Charles de Gaulle aircraft carrier. Although this initial contract commits to the modernization of three ships, Avascent Analytics believes that all five will eventually receive similar upgrades. While the age of French military equipment hovers just below the regional average, its maritime platforms are on average four years older than those of its European neighbors. Political support for robust defense spending remains strong, Avascent Analytics estimates that indigenous defense suppliers have accounted for 82 percent of the country’s contract value since 2012.

On May 8, Poland opened a tender for a new maritime patrol aircraft (MPA). The new aircraft will replace Poland’s aging M-28Bs and M-28 Bryzas, and will serve primarily in reconnaissance, anti-submarine warfare, and anti-surface warfare roles. However, neither the total cost nor the number of aircraft sought were published. While the release of the new tender is motivated primarily by the age of Poland’s current MPAs, growing concern about Russian submarine activity in the Baltic Sea is also a factor, and one that will continue to influence Polish procurement in this area. In addition to the maritime patrol aircraft tender, Poland is also looking to procure three ISR aircraft under the “Płomykówka” or “Barn Owl” program.

On May 8, the Romanian Air Force signed a contract with Lockheed Martin for the procurement of F-16 training simulators. The value of the contract was not publicly disclosed, but Lockheed Martin is expected to deliver the SciosTrain simulators in 2019. Romania currently has 12 used F-16s following a deal signed in November 2013 with Portugal worth $871 million. The first nine aircraft were delivered in 2016 while the remaining three are expected to be delivered this year. The Romanian Air Force is also considering procuring an additional 20 F-16s from the US.

On May 10 Turkey’s STM Defense Technologies Engineering and Trade and Germany’s ThyssenKrupp Marine Systems (TKMS) signed a letter of intent to cooperate on a bid for a submarine contract for the Indonesian Navy. The deal, signed at the International Defense Industry Fair (IDEF’17) in Istanbul earlier this month, will partner TKMS with Turkey’s Golcuk shipyard to offer the Reis-class variant of the Type-214 diesel-electric submarine. The Type-214 was developed by Germany’s Howaldtswerke-Deutsche Werft (part of the TKMS Group). The Turkish Navy is currently procuring six of the submarines which are being built at the Golcuk shipyard with a mix of subsystems from Turkish and German industry. As part of an increased emphasis on naval procurement, Indonesia has been increasing and diversifying its submarine fleet.

Inmarsat-5 F4 launched on SpaceX’s Falcon 9 on May 15. Because the satellite is not needed for global coverage, Inmarsat-5 F4 will serve discreet business tasks during its lifetime. Inamrsat-5 F4 was initially scheduled to launch on Falcon Heavy; however, delays in development of the rocket and improvements to Falcon 9’s capacity to orbit led to a switch to Falcon 9 instead. Although SpaceX has stated that Falcon Heavy will debut later this year, delays associated with the Florida launch pad repairs and modifications could delay Falcon Heavy’s maiden launch to Q1 2018.

The Weekly Wire: For Your Situational Awareness 5.10.17Weekly Wire

The Weekly Wire: For Your Situational Awareness 5.24.17Weekly Wire