The Weekly Wire: For Your Situational Awareness 6.1.17

NASA released its FY18 Budget Request on May 23, sparking interest from many quarters about the agency’s future. The Science account has generated particular interest. From FY17 to FY18, a large cut to the Earth Sciences subaccount of $166.6 million (8.7%) is roughly offset by a boost to Planetary Sciences of $157.8 million (8.9%). Funding for the James Webb Space Telescope remains close to the same level, with only a $35.7 million (6.3%) drop from 2017, and both Astrophysics and Heliophysics largely escaped the axe, with less than a 1% decrease apiece from year to year. 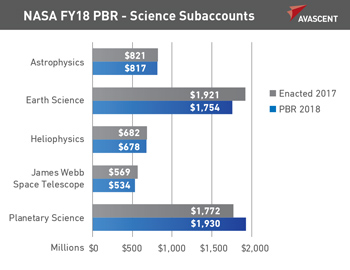 In terms of individual programs, the largest boost in Earth Science is for the Landsat Data Continuity Mission (LDCM) by $117.2 million (200%). For Planetary Science, the Insight program increased significantly by $77.1 million (238.7%). In the Heliophysics account, Solar Probe Plus gained $55.5 million (26.4%). And Astrophysics’ largest programmatic increase is to Exoplanet Exploration, with a gain of $28.3 million (19.2%).

While the budget request does not necessarily portend the outcome of the Congressional appropriations process, it provides insight into the new administration’s reprioritization of space policies and a look at the potential future of the American space program.

On May 21, Israel Aerospace Industries was awarded a $630 million contract to supply long range surface-to-air missile (LRSAM) defense systems to the Indian Navy. The LRSAM, also known as Barak 8, is a missile system jointly developed by India and Israel. The missiles will be manufactured in India by Bharat Electronic Limited under Indian Prime Minister Narendra Modi’s “Make in India” initiative. India and Israel have an increasingly robust defense relationship. The Barak 8 has been a significant success for the Israeli defense industry, as IAI and the Indian Defense Ministry signed a contract in April for over $2 billion worth of Barak 8 missiles for the Indian Army. Barak 8 missiles will equip India’s newest destroyers, frigates, and its indigenous aircraft carrier.

On May 22, Denmark’s Defence Acquisition and Logistics Organization signed an agreement with Nexter for 15 Caesar 155mm truck-mounted artillery systems. The deal is worth approximately $45.2 million, and includes options for the purchase of six more systems. This is the first sale of the eight-wheel variant of this system, with the six-wheel version already in use by French artillery units in Afghanistan and Mali. While the market for wheeled and tracked combat vehicles in Denmark is expected to grow at a rate of 38.4% through 2021, all known programs in this market have already been awarded.

The Israeli Air Force will receive an additional F-35 Joint Strike Fighter in 2020 equipped with a special suite of test instrumentation. The test aircraft, which is not included in any specific contract, is being manufactured based on specifications that took two years to prepare and will be used to enhance the F-35’s air-to-air and air-to-ground capabilities. Israel has committed to buying 50 F-35s, with the average unit price around $100 million. There are a total of 12 global participants in the F-35 program: nine partner countries and three foreign military sales customers (including Israel). The total number of F-35s scheduled for production is more than 3,100.

Lockheed Martin will supply the Royal Saudi Navy with four Freedom-class Littoral Combat Ships (LCS) for a total of $6 billion. This follows President Trump’s first visit to Saudi Arabia in which both countries signed an arms deal worth $110 billion. The procurement of the LCS is part of the Saudi Naval Expansion Program II which seeks to modernize the country’s Eastern Fleet. In addition to this sale, Lockheed Martin will also supply the country with 150 Blackhawks, a THAAD ballistic missile defense system, and Patriot missiles alongside logistical support for the systems, for a combined total of $28 billion. Furthermore, Saudi Arabia is purchasing CH-47s from Boeing and could potentially procure up to 48 CH-47s worth $3.5 billion.

On May 24, South Korea’s Ministry of Defense approved a program worth an estimated $2.2 billion to upgrade the Republic of Korea Air Force’s (ROKAF) identification friend or foe (IFF) systems. The ROKAF’s current IFF systems operate on Mode 4, but would be upgraded to Mode 5 which offers improved anti-jamming functions. The upgrade will also allow the military to conduct more effective combined operations. North Korea’s increased use of drones to penetrate South Korean airspace has been reported as one of the key drivers for this decision. The upgrade program will begin next year and run through 2026, with most procurements occurring between 2021 and 2023. Both overseas contractors and domestic industry will play large roles in the program, though exact details have not been revealed yet.

The Weekly Wire: For Your Situational Awareness 5.24.17Weekly Wire

The Weekly Wire: For Your Situational Awareness 6.7.17Weekly Wire