The Russian invasion of Ukraine has demonstrated that energy is a crucial national security consideration.

On 8 May 2022, European Commission President Ursula von der Leyen presented the REPowerEU strategy, with plans to reduce EU reliance on Russian crude and refined oils by two thirds in 2022 and to phase them out by 2030.

If passed in legislation, this strategy may accelerate the EU’s decarbonization strategy, as many countries may look to clean energy alternatives to replace Russian fossil fuels.

Even before Russia’s invasion of Ukraine, climate change and decarbonization strategies have been a top priority for European countries.

Many countries are looking to their defence ministries and armed forces to play an important role in those strategies, given that the defence sector often contributes 50%-80% of national greenhouse gas emissions footprints.

The MoD is looking to do its part in reaching the nationwide goal of achieving net zero by 2050.

In March 2021, the UK MoD released the Climate Change and Sustainability Strategic Approach (CCSSA) which outlined how the UK Armed Forces can tackle climate change and national security to realize a more sustainable future.

The report includes 2050 ambitions around adaptation and resilience, sustainability and net-zero, and global leadership (see table below). 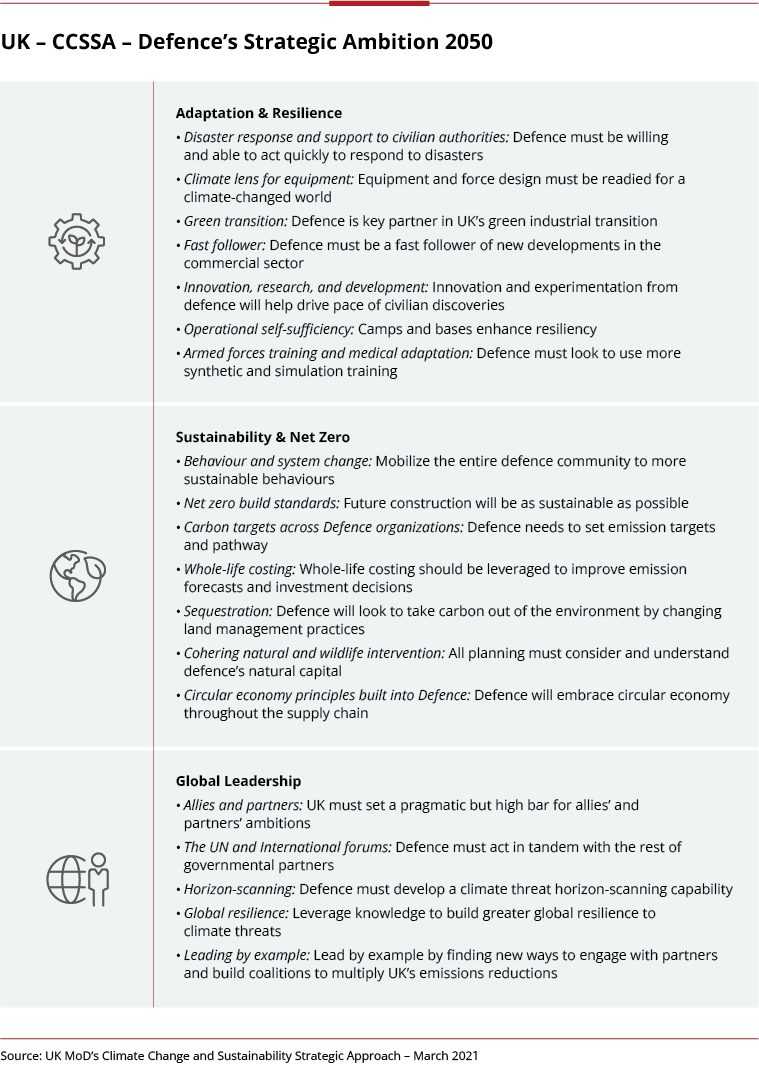 The MoD introduces its intent to adopt a ‘fast follower’ approach to climate change and national security leveraging carbon-reduction technology being developed by the civil sector, along with measures specific to the military.

In addition, it has plans to develop an adjusted and sustainable procurement framework to facilitate change, with the implementation of flexible contracts. The MoD is also considering how to leverage new R&D to pilot and adopt green solutions (e.g., solar panels, green fuels for aviation).

To achieve these climate change and national security ambitions, the CCSSA suggests an epoch by epoch approach:

Epoch 1 (underway) is mostly focused on a step change in existing projects. The MoD has actively accelerated rolling-out its green projects.

For example, the British Army’s Project Prometheus aims at reducing energy demand and increasing green supply across the Army’s estate.

This pilot is expected to realise a combined £1M in efficiency savings and save 2,000 tCO2e per year, which will be reinvested into infrastructure.

As the largest source of carbon emissions within defence, the RAF has set the ambitious task of achieving Net Zero by 2040.

This plan is still in development, but there are several workstreams with significant momentum including adoption of SAFs and development of electric fixed-wing and VTOL aircraft – alongside extensive infrastructure and environmental investment.

The MoD has released an ambitious climate change and national security strategy, but is still filling in the details as to how that strategy will be accomplished.

Apart from some exceptions, the MoD has mostly to date looked outside of traditional defence players to small/medium sized companies and academia to pilot technologies.

While the MoD needs to do more to incentivize traditional industry to go green, industry can also lean forward by pitching green solutions and continuing to adopt robust in-house sustainability strategies.

Germany made headlines in February 2022 when Chancellor Olaf Scholz announced a one-time €100 billion investment in its military and a commitment to allocate >2% of annual GDP towards defence spending by 2024.

This Zeitenwende – or “turning point” – is unprecedented for a country that has been wary of defence spending. Overall, Germany is at an inflection point– a defence spending increase, an ambitious new climate plan, a governing coalition with representation from the country’s Green party, and the decision to phase out Russian oil are likely to catalyze a shift over the next decade.

Germany has long been a leader in renewable energy – passing clean energy incentives in the early 2000s – and has a goal to reach net-zero GHG emissions by 2045. Climate Action Plan 2050 is the country’s roadmap to reach net-zero and lays out specific goals and benchmarks for all sectors.

Though the plan does not specifically mention defence, goals related to the industry, buildings, and transport sectors are likely to influence defence production (see table below).

The MoD has already stated that it is taking the related emissions reduction targets into consideration for infrastructure planning and energy efficiency, though they have no defined targets. 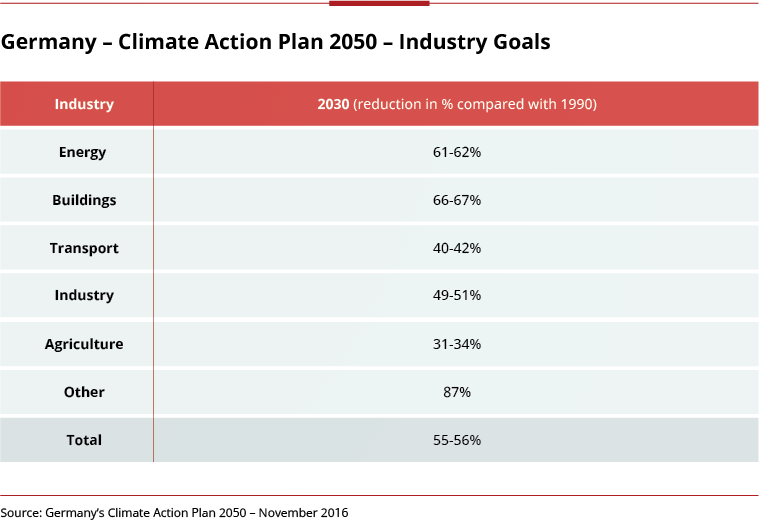 Emissions reduction has historically been a focus of the German military, and the MoD has successfully reduced emissions over the past 30 years.

Leaders have specifically been focused on reducing transport emissions, with a 47% decrease in emissions in mobility from 2005-2019[1].

The MoD and Federal Ministry of the Interior have also come out in favor of synthetic fuel use for military vehicles and argue for intensifying R&D efforts into green vehicle solutions.

The rapid influx of defence spending will allow the MoD to move forward on climate change and national security priority projects.

No specific defence climate strategy has been passed, but industry should be prepared for sustainability-related defence procurement guidelines with some of this spending, especially given the role the Economic Ministry (controlled by the Green party) plays in procurement regulation.

Reductions in transport emissions are likely to be a continued focus of the MoD climate change and national security strategy going forward, so industry should be ready to meet a growing demand for EVs, synthetic fuels, and more green vehicle technology (e.g., energy storage, mobile generators, etc.).

France’s Ministry of the Armed Forces

The French Ministry of Armed Forces was one of the first militaries globally to publicly state the need to consider climate change and national security as a linked issue. In 2015, it organized the first ministerial-level international conference on the defence and security consequences of climate change.

In 2021, France was one of the countries that publicly supported an Ireland-led proposal for the UN Security Council to consider a special envoy for climate.

In April 2022, France released an updated Climate and Defence Strategy. Heavily emphasizing the need for cooperation and partnerships, the Strategy revolves around four axes (see table below).

The Ministry is committed to reducing final energy consumption by 30% overall and to specifically reducing real estate energy emissions by 50% by 2030, as compared to 2010 levels. 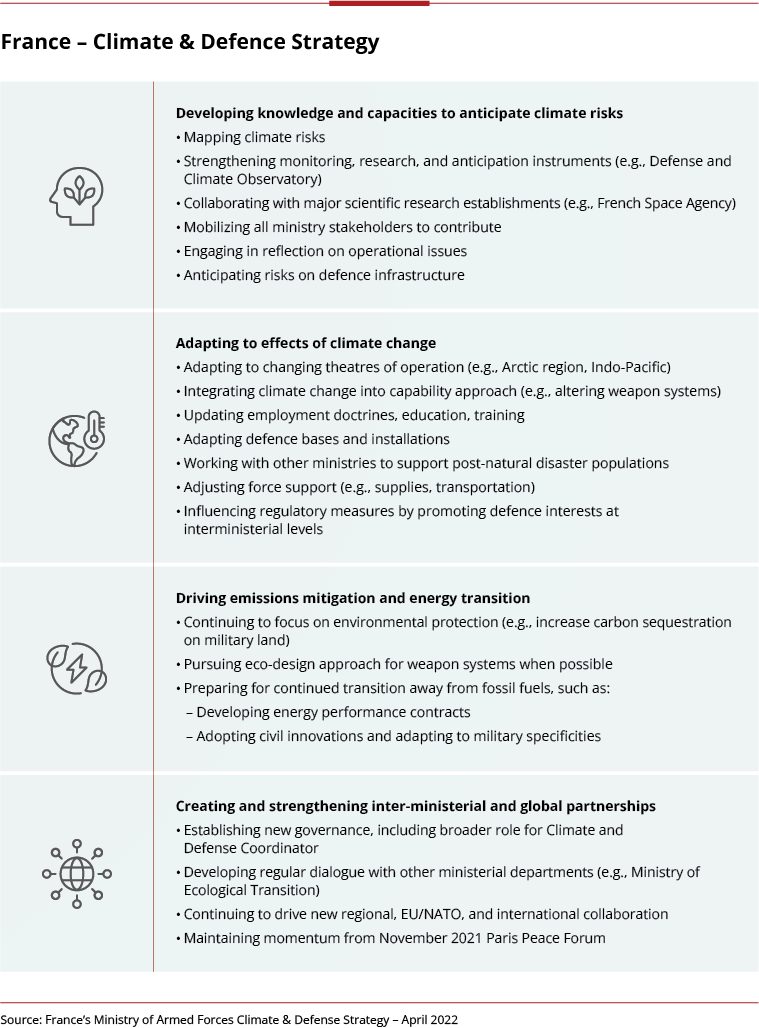 France has sought to weave climate change and national security considerations into all decisions and will likely show preferences for industry players that offer the greenest solutions across all procurement decisions, although there are limited green criteria in defence RFPs today.

Working with DGA and DIA, there may be opportunities for traditional primes and other civil or commercial players to introduce new green technologies that optimize operational performance and environmental efficiency, assuming such technologies are cost-competitive.

They are not the only European countries responding. As part of recently adopted Compass Strategy, all EU members must develop climate change and national security strategies to prepare its armed forces for climate change by the end of 2023.

Ultimately, defense climate objectives will only be achieved if government and industry work together to generate mission, economic, and climate benefits through the introduction of new technologies and processes, rather than seeing climate investment an additional cost of doing business.

Sustainable operations will increasingly become a ‘hygiene’ factor in day-to-day operations and even specified as part of procurement requirements.

There are also three primary areas where traditional and non-traditional defense players can add value to these climate change and national security strategies: