Impact investing has exploded onto the scene. Driven by rising awareness of critical issues like climate change, ESG funds have grown to ~$3 trillion under management, up from ~$1 trillion in 2020.

As capital continues to flow, private equity and venture capital firms have a newfound incentive to acquire and scale profitable companies focused on impact.

But doing so will require investment managers to navigate new questions, notably:

Answers to these questions will in part be answered by four distinct public sector levers:

Federal policy is rapidly gaining momentum as a lever to guide and incentivize impact investing.

Further, developers are eligible for additional tax credits if components are produced domestically, motivating expansion of US supply chains.

The bill not only benefits investors by incentivizing adoption of several technologies, including wind, solar, hydrogen, nuclear, and carbon capture and storage.

Beyond federal stakeholders, others – such as state governments – have taken the helm on impact investing policy. California is a case in point.

Its Obama-era fuel efficiency standards caused a significant shift in supplier behavior as Ford, Honda, BMW, and other major manufacturers opted into its more ambitious targets even as the Trump Administration rolled back federal standards.

Outside of green energy, other key policies (e.g., the 1977 Community Reinvestment Act) [CRA], incentivize impact investing in historically underserved communities. Currently the Treasury is looking to revamp the CRA with an emphasis on digital modernization.

To make the most of emerging opportunities, impact investors will have to grapple with several questions, including:

The federal government also houses R&D accelerators, which are a unique source of potential high-return investments.

Since the late 1950s, accelerators have helped mature transformational technologies, including computers, GPS, and mRNA vaccines. Now, these accelerators are doubling down on impact.

In 2009, the Department of Energy established ARPA-Energy, dedicated to commercializing clean energy technologies. More recently, the Biden Administration stood up ARPA-Health, aimed at developing therapeutics to critical diseases like Alzheimer’s, diabetes, and cancer.

ARPA-E is a strong case study for the value of federal accelerators to impact-oriented companies. Since 2009, ARPA-E has distributed over $2.9 billion in R&D funding. 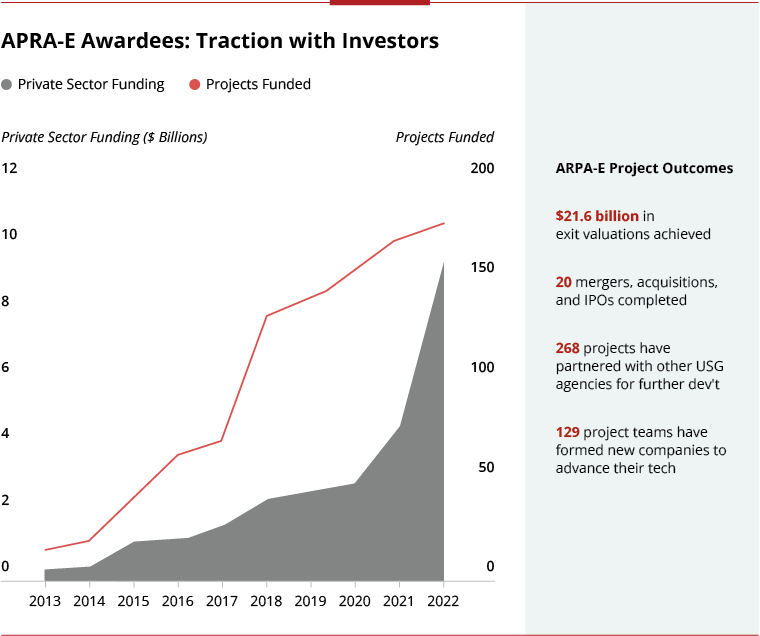 Example companies with ARPA-E investment – included below – have seen significant growth stemming from their R&D work:

As ARPA-Health matures alongside other government R&D programs like ARPA-E, and new potential accelerators are established (e.g., ARPA-Climate), impact investors may continue to find high-impact, high-return targets amongst their awardees.

Impact companies looking for scale may find meaningful opportunities within the public sector.

For instance, while impact investors have historically balked at companies working with the Department of Defense, recent commitments have created green energy opportunities across the US armed forces.

The DoD’s FY23 budget includes $2 billion for installation resiliency and adaptation, including $550 million for the Energy Resilience and Conservation Program.

Startups are supporting this transition across DoD and the broader federal government. 270 ARPA-E awardees have partnered with government for follow-on work, up from 16 in 2013.

That number will continue to grow. And as defense customers look to integrate other green technologies into operations (e.g., sustainable aviation fuel, hydrogen), other growth avenues will open.

Federal agencies are also weaving other types of impact into their FY23 budgetary priorities, including health and wealth equity.

HHS is requesting $850 million for the Ending the HIV Epidemic Initiative and $470 million to improve maternal health outcomes.

And the DOE is requesting over $502 million to weatherize homes and promote energy efficiency across low-income residences.

These budget allocations are indicative of a broader story. Government agencies are often willing to invest in the public interest, making them ideal targets for impact investors looking to scale portfolio companies and smooth their transition to commercial markets.

But as projects mature, investment cases for grant/loan recipients become more attractive, creating a pipeline of investment opportunities across interest areas, including the environment and health:

Private sector grant/loan recipients like Bioenergy DevCo, who partners with USDA and EPA to promote biogas recovery and methane emission reduction, have used this funding to scale operations.

Closer to home, the CDC has expanded grant/loan programs to improve care for underserved and disproportionately affected communities during the COVID-19 pandemic.

Across the board, grant/loan programs can provide critical seed funding for impact-oriented companies, helping them achieve initial returns, scale, and truly make an impact on critical issues.

The public sector can be a critical enabler of growth for impact-oriented companies.

Favorable policies create and expand pockets of opportunity. R&D and loan/grant funding rapidly mature solutions and demonstrate their value to the market.

And so, investors who have a robust understanding of the push and pull of public sector influence on target markets will be uniquely positioned to achieve strong returns.