FY 2023 President’s Budget Request is a Study in Continuity

The FY23 President’s Budget would barely increase overall funding for O&M or Procurement.

This reflects a clear statement of priority on protecting military personnel and their families against inflationary pressures, and leaning into an innovation-led modernization agenda geared toward space, cyber, and other technology areas.

The FY23 President’s Budget that was rolled out on March 28 offered a glimpse of longer-term growth plans under the Future Years Defense Plan (FYDP).

But the Defense Department does not plan to release detailed information about that longer term plan until after April 18. 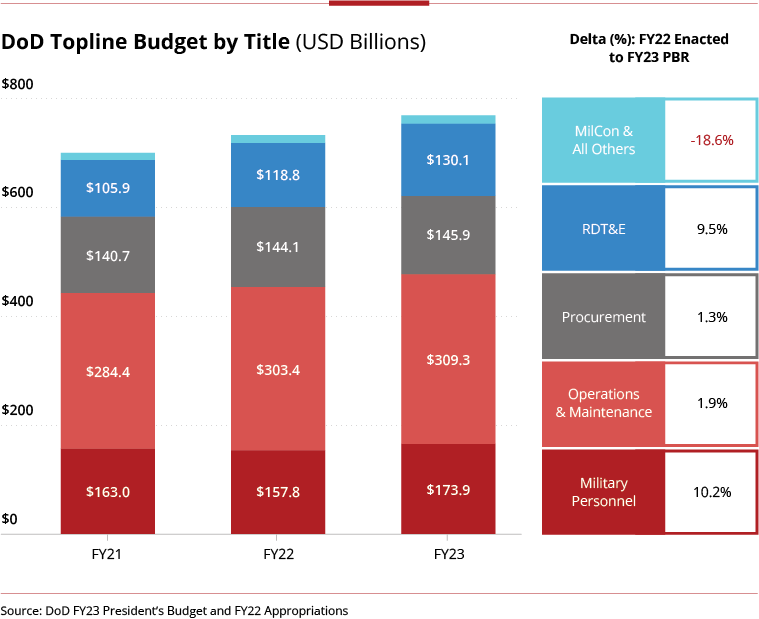 Overall growth in the topline of 4.3% means DoD will lose overall purchasing power in the face of rising inflation.

DoD officials acknowledged in an April 6 congressional hearing that the inflation rate assumptions they used last fall in developing the budget (which appear to assume around 4.5% from FY22 through FY24, and around 2.2% for the longer-term of the Future Years Defense Plan) are being exceeded by actual global economic conditions.

This is becoming a central theme in congressional criticism of the FY23 President’s Budget (see below).

The Biden Administration quietly released a very brief unclassified summary of its new National Defense Strategy, which identifies China “as our most consequential strategic competitor and the pacing challenge for the Department.”

While Russia is identified as an “acute threat,” the focus on China and the Indo-Pacific region shapes many of the investment priorities put forward in the FY23 President’s Budget.

Overall, the priorities identified in this strategy do not diverge in substantial ways from the NDS published by the Trump Administration in 2018.

The budget request again embraces the “divest to invest” approach in some areas, proposing that the Navy retire 24 ships (including 9 relatively new Littoral Combat Ships) over the Future Years Defense Plan, and that the Air Force retire 150 aircraft in FY23, including 21 A-10s, 33 F-22s, 8 JSTARS, 15 AWACS, and others likely to draw congressional defenders. 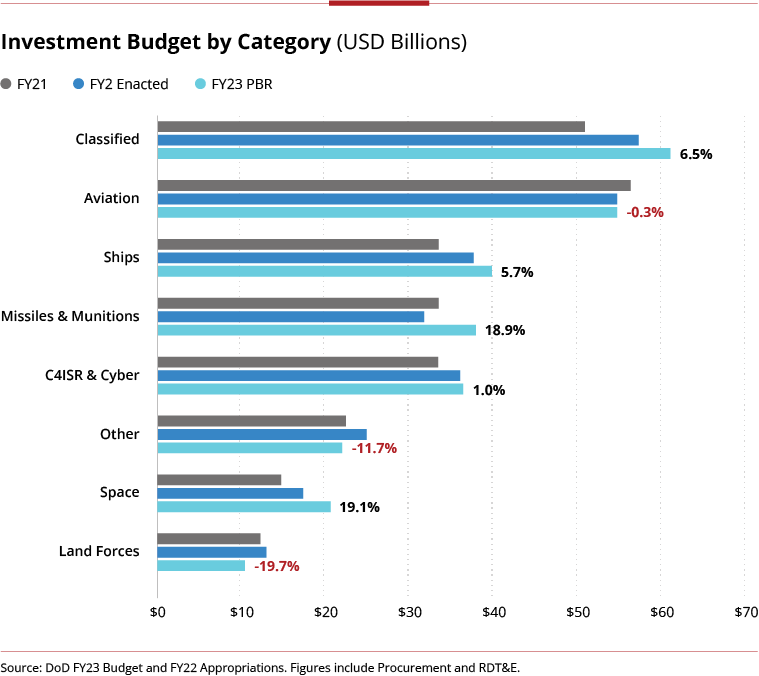 DoD officials have said they did not make specific adjustments to the budget in the period just before and following Russia’s February 24 invasion of Ukraine.

The assistance flowing to Ukraine around this time (both materiel support to Ukraine and the shift of US forces into the European theater) was the subject of a supplemental appropriation of FY 2022 funds.

DoD Comptroller Mike McCord suggested a supplemental request for FY23 support to Ukraine may be forthcoming in the months ahead.

Nevertheless, some elements of the FY23 President’s Budget offer a hint as to what the US Army in particular may have been thinking last fall as Russian forces increasingly massed on Ukraine’s border in preparation to invade.

In particular, procurement of many categories of Army ammunition and tactical missiles would increase well above inflation.

The reaction in Congress so far suggests that the FY23 National Defense Authorization Act (NDAA) and FY23 Defense Appropriations will look much more different than the FY23 President’s Budget Request.

Permission to retire many or most of the ships and aircraft identified for decommissioning may be denied (although some, as in the FY22 NDAA, may be permitted).

Various Republican and Democratic members of Congress are citing concern over inflation, the situation in Ukraine, and the pace of US modernization relative to China to push for a significant increase in the topline budget.

A group of 40 GOP House members has called for a topline increase equal to 5% in real terms over the FY22 enacted level. Depending on how inflation expectations are finalized, that could yield a nominal increase over FY22 of 10% or more.

An increase of this scale might be more ambitious than the wider politics of spending and deficits will permit.

Democratic leaders on defense in the Congress have generally sought to avoid citing a particular topline budget target. But Rep. Adam Smith (D-WA), seems to have indicated the possibility of an increase above the PBR in the realm of around 3.5% to about $800 billion.

Whatever the topline increase, it is likely that boost will heavily favor investment accounts, especially procurement. Indeed, it is likely that the Biden Administration fully expected Congress to add substantial Procurement and other funds when it crafted the President’s Budget.

Note that Congress was just finishing work on a 4.9% bipartisan increase in FY22 defense appropriations in March 2022 as the FY23 President’s Budget was being finalized.

From here, the Congressional appropriations and authorization cycles get underway. As noted, many members of Congress are calling for clarity on inflation expectations to calibrate the size of a possible increase in the topline budget.

The Armed Services and the Combatant Commands have been submitting lists of Unfunded Priorities, which will partly shape how Congress allocates those added funds.

It is unlikely that either the appropriations or authorization processes will wrap up in time for fiscal year 2023 to start on October 1. Over the past 20 fiscal years, the fiscal year has started under a continuing resolution 15 times, and 2023 will probably be no different.

Of course, this is an election year, with mid-term elections in November having the potential to shift control of both the House and Senate.

Republicans are heavily favored to take control of the House, and have a better-than-even shot at the Senate also. If they do, the Republicans will exert far greater control over the outcome for discretionary defense and non-defense levels in FY 2023. 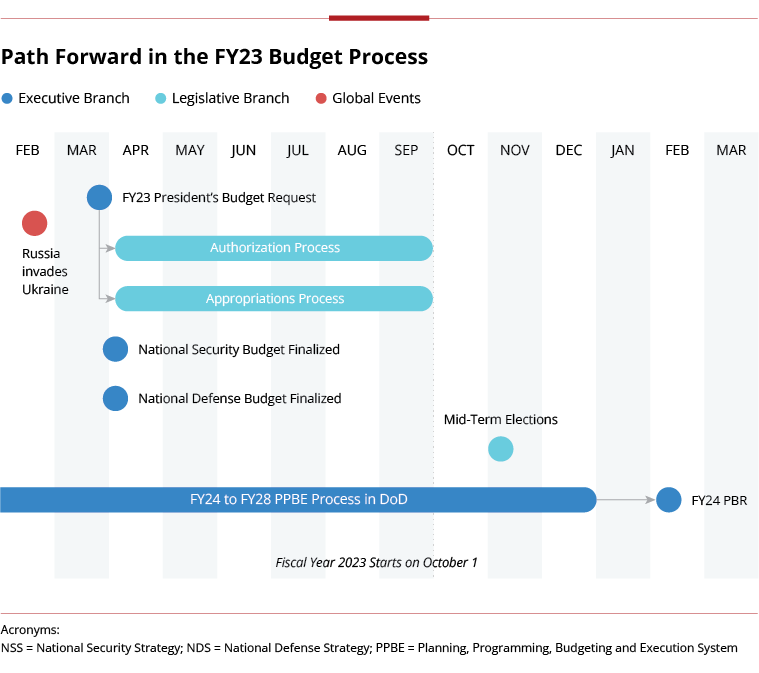 December 16, 2021
A Burning Platform for Building Bridges: Expanding the National Security Innovation Base

How Will the National Defense Strategy 2022 Affect the Defense Enterprise?Proving Ground