At best, it is too early to tell whether DoD’s use of Other Transaction Agreements has truly delivered on the promise of diversifying the defense technology supply base or increasing the speed with which DoD can engage in prototyping and technology experimentation.

The use of OTA contracts has increased significantly in the past decade. But as a share of total DoD research & development spending, it remains a small fraction. Further, traditional defense contractors account for a very large share of OTA contract dollars.

OTAs are Federal contracts that are not required to adhere to standard Federal Acquisition Regulations. They give DoD and other agencies much more flexibility to engage companies and industry consortia without the time consuming work of nailing down a wide array of normally traditional contract requirements, like:

In this way, they have grown as a tool for DoD to engage in prototyping and technology development with non-traditional suppliers. OTAs have, in effect, sped the timeline along which a handful of quasi-Programs of Record have been pushed toward design maturity.

That seems to be the case with the Army’s Future Armed Reconnaissance Aircraft (FARA), some hypersonic weapons and a number of advanced space systems. But the role of OTAs remains limited in the broader context of DoD technology development efforts.

A review of Federal contracts data provides a glimpse into where OTAs are being used, for what kinds of activities, and with which contractors. The results show the reality behind the hype.

For all the attention that OTAs have received, it is important to bear in mind that spending on these contracts represents just a small share of total DoD R&D activity.

Spending via OTAs grew to account for just 3.3% of the Research, Development, Test & Evaluation (RDT&E) budget account in fiscal year 2020. But the share of RDT&E funds spent via OTA contracts has varied widely by Service.

It is true that the Army has made relatively heavy use of OTAs, funneling more than 10% of its RDT&E expenditures through these agreements in fiscal year 2020.

But the Army’s heavy use of OTAs is accounted for by just a handful of projects. The FARA program accounted for over 20% of Army OTA value in FY2020, and spending on COVID-related clinical trials accounted for another 15.6%. 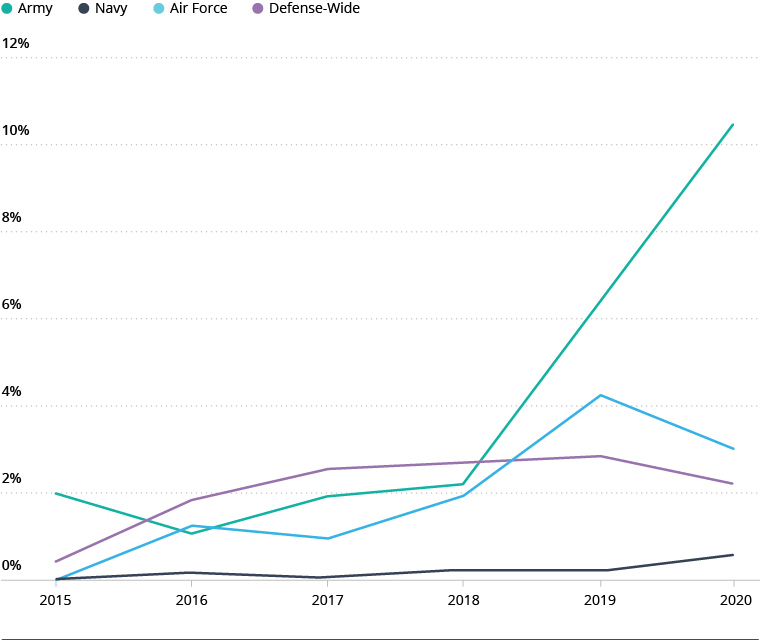 By contrast, the other Services have used OTA contracts much more sparingly to execute relevant RDT&E activities.

Less than 1% of the Navy’s RDT&E budget flowed through OTA vehicles between FY 2015 and 2020. The Air Force and various defense agencies (mainly DARPA) have drawn on OTA contracts more commonly.

But even among these groups, Other Transaction Agreements have usually represented well below 3% of RDT&E spending. (Only in FY 2019 did Air Force OTA contract value exceed 4%.)

Like the Army, this spike in Air Force OTA activity hinged on a relative handful of projects: In FY 2019, the Air Force spent on 84 OTA contracts, but just 25 of these involved more than $1.5 million, and the 10 largest projects accounted for nearly 86% of all Air Force OTA spending in FY 2019.

OTAs Have Been Concentrated in Space and C4ISR/Cyber Technologies

The Services and defense agencies have clearly favored some technology areas in the use of OTAs. In DoD’s core warfighting areas, space and C4ISR have been the primary areas in which Other Transaction Agreements have been used.

In FY 2020, these areas accounted for over 43% of all OTA contract value. That figure would have been higher, except that DoD drew significantly on OTA contracts for a range of R&D activities related to COVID-19 in FY 2020 (see “Medical” in the chart below). 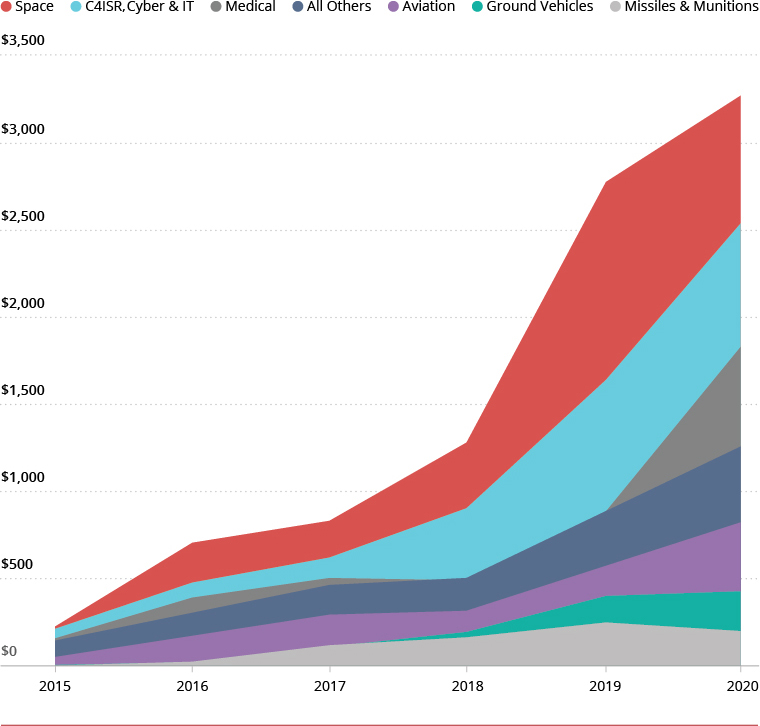 Prototyping activity on a range of space-related technologies has been the clear “favorite,” in terms of OTA contract focus.

The broad category of “C4ISR, Cyber and IT” (see chart) encompasses a very wide array of technology disciplines and end-uses. One thing these areas share is the presence of a wide range of commercial suppliers on whose skills DoD is anxious to draw.

This goes to the one of the central aims of OTA contracts, namely to access non-traditional suppliers more than DoD has been able to do in the past. (Note that the “All Others” category above may encompass activities related to other groups; US Government contract data can make it difficult to discern the technical focus of some projects.)

To be sure, DoD has used OTA agreements for activities outside space and C4ISR. As noted above, the Army has drawn on Other Transactions to advance the FARA rotorcraft project.

And DARPA, which is a significant user of OTA agreements, drew on these contracts for the Tactical Boost Glide project, among others. But space and C4ISR areas remain the areas most geared toward the use of OTAs.

Other Transaction Agreements are predicated on drawing non-traditional suppliers into the defense technology supply chain. 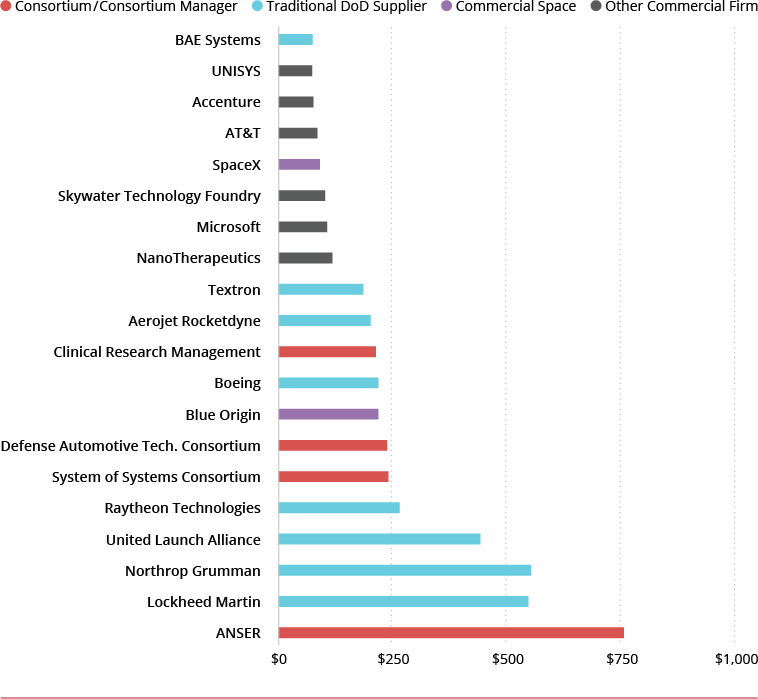 Lockheed Martin and Northrop Grumman are the two largest awardees of OTA contracts over the period FY 2015 through 2020. (This does not count ANSER, which administers various consortia through which many OTA contracts are let.)

Textron, BAE Systems, Leidos and General Dynamics have all drawn more than $50 million each in OTA contract value over this period.

Notably, the figures quoted here may undercount the true value flowing to big defense primes. This is because a substantial sum of OTA contract value goes to a number of technology consortia, which may in turn tap some of its member companies, which often include mainline defense contractors, to execute a scope of work. These consortia span an array of technology areas, including automotive, munitions, C4I, vertical lift, and other areas of defense focus.

Of the “defense majors” only L3Harris has remained outside the core of OTA contract awardees (at least as a prime contractor), accounting for just $5 million in OTA awards between FY 2018 and 2020, less than firms like Kratos, Sierra-Nevada, and SAIC.

To be sure, OTA contracts have allowed DoD to draw on a mix of what might be called “non-traditional” suppliers for various reasons.

A number of commercial IT firms (e.g., Microsoft, AT&T, IBM and UNISYS) have won DoD work via OTA contracts since FY 2015. Similarly, an array of commercially-oriented space companies have engaged in prototyping and technology development work for DoD under OTA agreements (e.g., SpaceX, with over $150 million in OTA value since 2015, and Blue Origin, with nearly $220 million over this period

And, of course, a wide array of defense technology start-ups have engaged with DoD using OTA agreements of lesser scale.

R&D on Land Forces would be reduced sharply in the Army, by about 16%. The Abrams tank, Joint Light Tactical Vehicle, and others would see lower RDT&E budgets from FY21.

The urgency of DoD’s effort to diversify its suppliers and innovate outside traditional processes often created the impression that OTA contracts would fundamentally upend the DoD acquisition world.

As with many aspects of DoD acquisition reform, it is easy to let the rhetoric around ambitions and objectives for OTAs obscure the impact they actually have.

But when considered in the context of a multi-pronged DoD approach to improved innovation, OTAs clearly have an important role to play, alongside an array of other measures.

In a few major areas, OTA contracting is clearly a central feature of the Defense Department’s chosen path forward. DoD leaders have judged that the need to move quickly toward new concepts in space, hypersonic weapons and a few other areas is worth the risk that may come from working outside the FAR.

For contractors, both traditional and otherwise, a key question is whether doing without the kinds of protections afforded by time-consuming FAR processes (e.g., termination liability) is outweighed by staying engaged with customers on high-priority areas.