The Fiscal Year 2022 President’s Budget Request (PBR) for the Department of Defense, coming in at $715 billion, proposes a sharp turn in spending emphasis to make “the investments to prioritize China as our pacing challenge.”

So said Deputy Defense Secretary Kathleen Hicks on May 28 at the rollout of the much-delayed FY22 DoD budget.

DoD leaders normally trumpet the changes each budget makes to align to strategy, but the President’s Budget 2022 truly does indicate a clear change in emphasis.

In some sense, the Biden Administration’s FY22 DoD budget embraces many of the priorities and policies put forward by the Trump Administration:

But what sets the President’s Budget 2022 apart is how deeply DoD has cut in most other areas in order to advance those priorities.

The depth of the internal shifting of resources that the FY22 budget proposes suggest that DoD leaders have no expectation of real growth in future toplines, which have yet to be resolved in a Future Years Defense Plan.

By contrast, the Army’s topline was dropped by -0.9%, leaving the Service with the smallest share of the DoD topline budget since before the 9/11 attacks.

In recent months, the Army leadership has been publicly arguing the Service’s relevance to a strategy increasingly focused on the Indo-Pacific region. But it seems clear that the FY22 PBR was shaped with a different sense of focus. 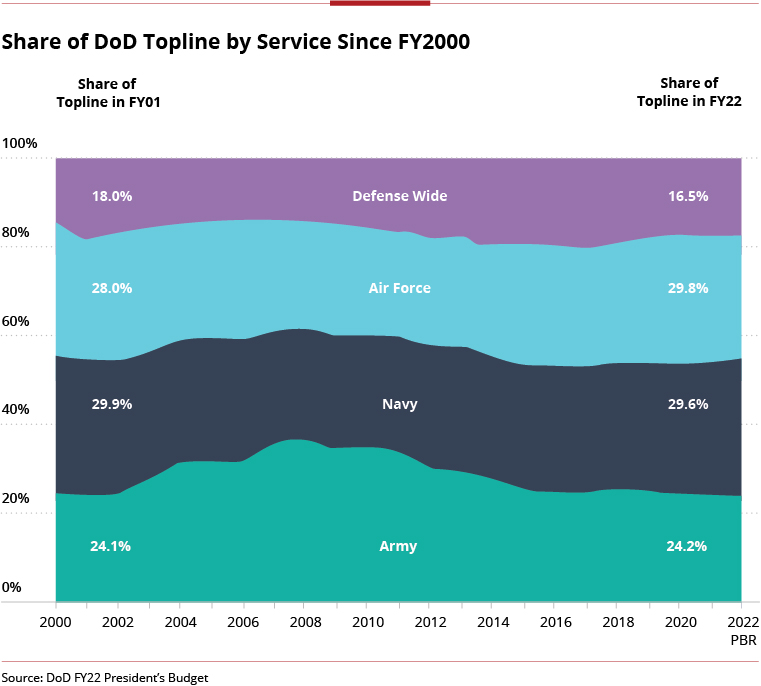 The FY22 PBR would increase O&M spending by 2.5%. This is driven by a mix of factors, including a 2.7% pay raise for DoD civilian employees, as well as the rising cost to operate and sustain many modern military capabilities.

Military Personnel costs would grow by 3.1%, driven mainly by a 2.7% pay increase for uniform military personnel.

Active endstrength would decline slightly in the Army, Navy, Air Force and Marine Corps, but the Space Force would grow in headcount to 8,400 active guardians.

Among ships, the Navy would retire 2 CG-47 cruisers, 1 LSD-41 amphib, 4 Littoral Combat Ships, and others. Congress has generally opposed these moves in the past and may have a similar reaction this year. (More on this below.) 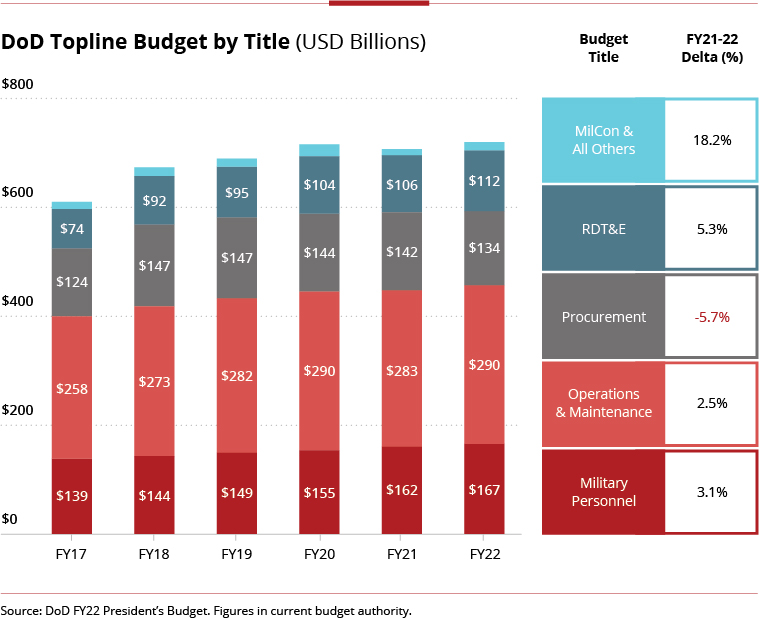 In order to fund a major investment in R&D, President’s Budget 2022 proposes to cut Procurement spending by 5.7%, or $8.1 billion below the FY21 enacted level. Each of the Services would see reductions in its Procurement budget in FY22.

The cuts would span most major capability areas, particularly aviation, land forces, and some categories of munitions.

The Navy’s shipbuilding budget would be slightly below the FY21 enacted level. It would buy eight battle force ships, including just one DDG-51 destroyer and several ships of relatively cheaper design (e.g., T-AO Oiler, T-ATS tug and salvage ship). 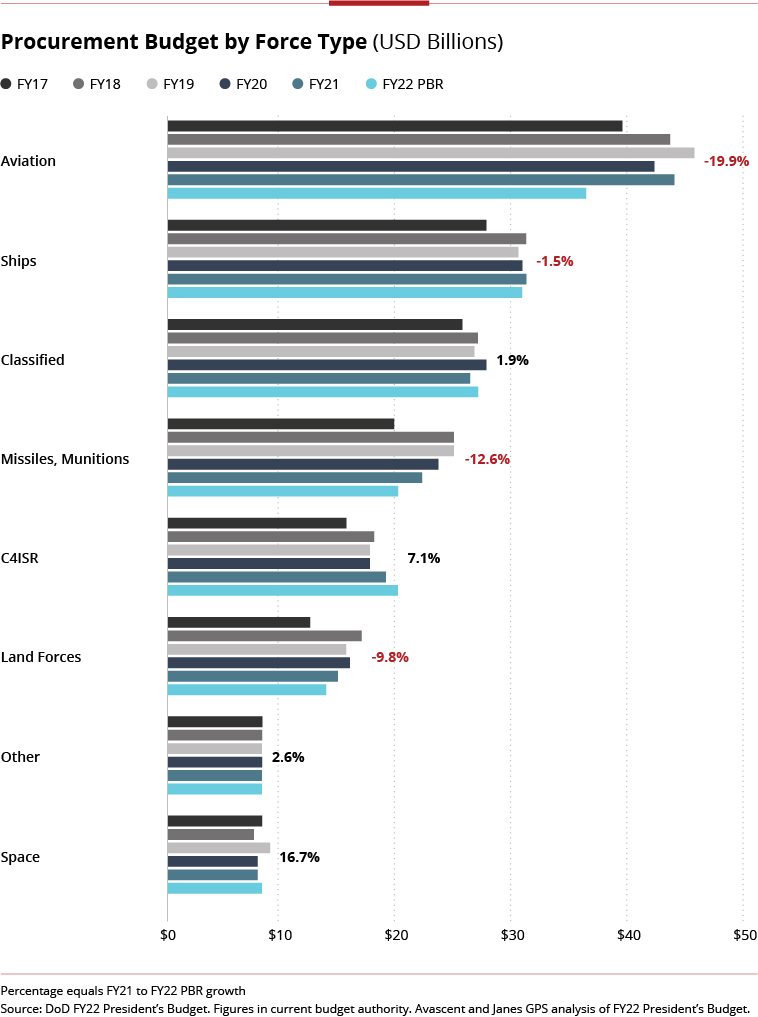 The cuts in Procurement programs proposed in the FY22 request will be controversial in Congress. As noted above, the Navy is requesting only one DDG-51, which the Congress seems very likely to increase to two in the authorization and appropriations processes to come.

The budget requests no new aircraft in the F/A-18E/F, MQ-9, and P-8A programs, which have reached the end of the program of record. But the budget also makes cuts in programs like HH-60W Combat Rescue Helicopter and MV-22 Osprey, reflecting reductions below the ongoing program of record.

The Air Force plans to request just 48 F-35 aircraft in FY22, below the program of record level of 60. In previous years, Congress has added to DoD requests for many platforms, including F-35, often pointing to the Services’ unfunded priority lists (those will probably surface later in June).

But some House Armed Services Committee members, including the committee’s chairman, Rep. Adam Smith (D-WA), have said no more increases for F-35 in FY22. Some members on the House Appropriations Committee, on the other hand, are already criticizing the proposed reductions.

While the Procurement budget declined overall in the FY22 budget, a few areas were spared the worst. Most strategic forces modernization programs (B-21 bomber, Columbia-class submarine, Ground Based Strategic Deterrent, Long Range Stand-Off (LRSO) Weapon) would be funded at or above what was planned in the previous year’s plan for FY22.

Space procurement would increase in FY22, as would a wide array of C4ISR, Cyber and EW projects. Finally, a variety of weapon types geared toward long-range strike would see higher Procurement spending in FY22. These include hypersonic weapons, JASSM-ER, Precision Strike Missile, Naval Strike Missile, LRASM, and others.

But the centerpiece of the President’s Budget 2022 request is a move to increase Research, Development, Test & Evaluation (RDT&E) accounts by 5.3% from FY21 to FY22.

Growing R&D would benefit most areas in the DoD investment program, but C4ISR, Missiles & Munitions, Space and Classified accounts would gain the most. 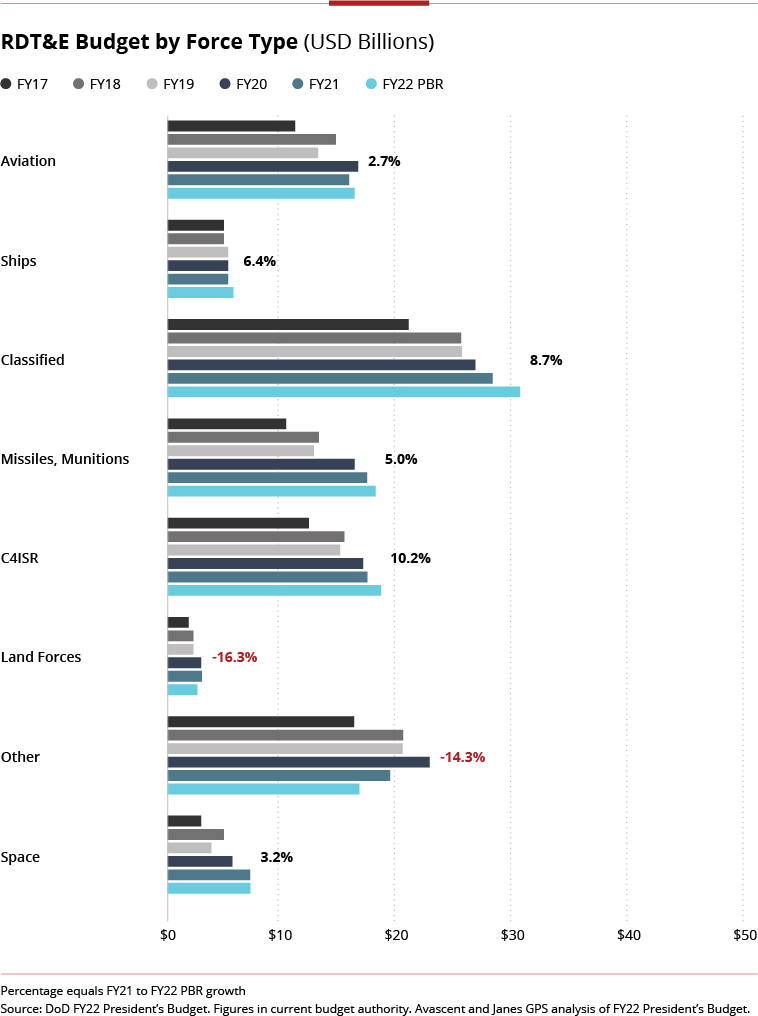 R&D on Land Forces would be reduced sharply in the Army, by about 16%. The Abrams tank, Joint Light Tactical Vehicle, and others would see lower RDT&E budgets from FY21.

Another area that suffers in the otherwise expanding RDT&E budget are the Science & Technology accounts, the so-called Basic Research (down 13.1% from FY21 enacted levels), Applied Research (-14.4%) and Advanced Technology Development (-11.1%).

The evolving defense strategy will apparently favor a mix of modernization approaches: upgrading stalwart designs that are adaptable to new realities (e.g., B-52, F-15, Abrams, others); experimenting with new concepts, technologies and designs; and pursuing commercial approaches to software development, sustainment and innovation. 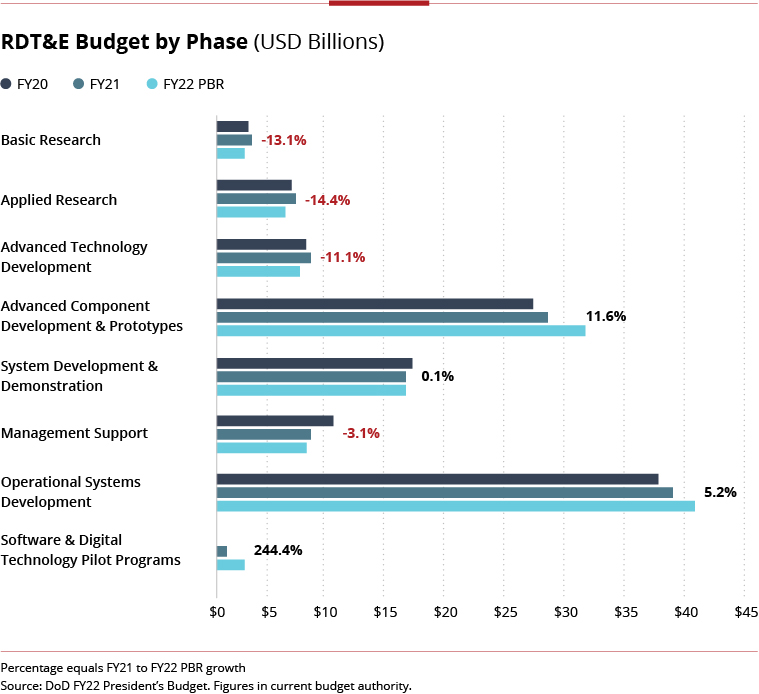 The shifts proposed in the FY22 budget request involve some wrenching changes, between the constraints imposed on the Army and the retirements and Procurement cuts that the Administration is asking the Congress to accept.

It is hard to envy Secretary of Defense Lloyd Austin as he reviews the national defense strategy and works to shape the fiscal year 2023 President’s Budget Request next year. 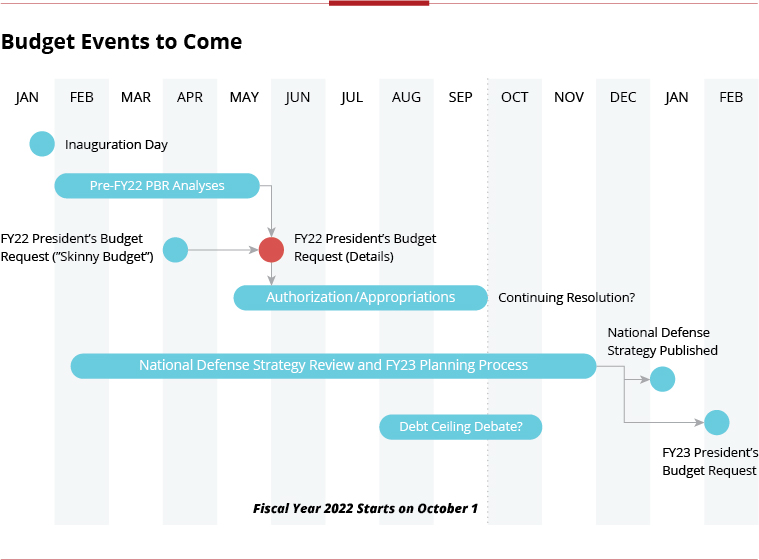