Fast Followers: A Roadmap for the DoD’s Adoption of Electric Military Vehicles

By Jacob Finke and John Hess
Posted April 1, 2021
In Proving Ground
Fast Followers: A Roadmap for the DoD’s Adoption of Electric Military Vehicles2021-04-012021-09-09https://www.avascent.com/wp-content/uploads/2018/08/avascent_logo_140x83.pngAvascenthttps://www.avascent.com/wp-content/uploads/2021/04/avascent_whitepaper_newsinsights_fastfollowersaroadmapfordefensevehicleelectrification_featureimage.jpg200px200px

Major shifts are occurring in the electric vehicles market due to growing government and industry investment. Transportation – and ground vehicles, in particular – has become a focal point for the broader electrification discussion due to the large carbon footprint that automobiles represent and the rising consumer embrace of electric vehicles (EVs) from manufacturers like Tesla and General Motors. In defense markets, attention has turned to electric military vehicles.

In line with these trends and benefitting from the Biden Administration’s focus on renewable energy, the US Government has begun considering how to implement electrification.

Behind only the US Postal Service (USPS), which has selected an EV from Oshkosh as a portion of its next generation mail carrier fleet, the Department of Defense fields the second-largest Federal vehicle base.

Commercial EV technology has made great advances in recent years, evidenced by the proliferation of Tesla and other EVs. In 2019, EVs and HEVs were ~4% of total US personal vehicle sales, up from ~2.3% in 2011. 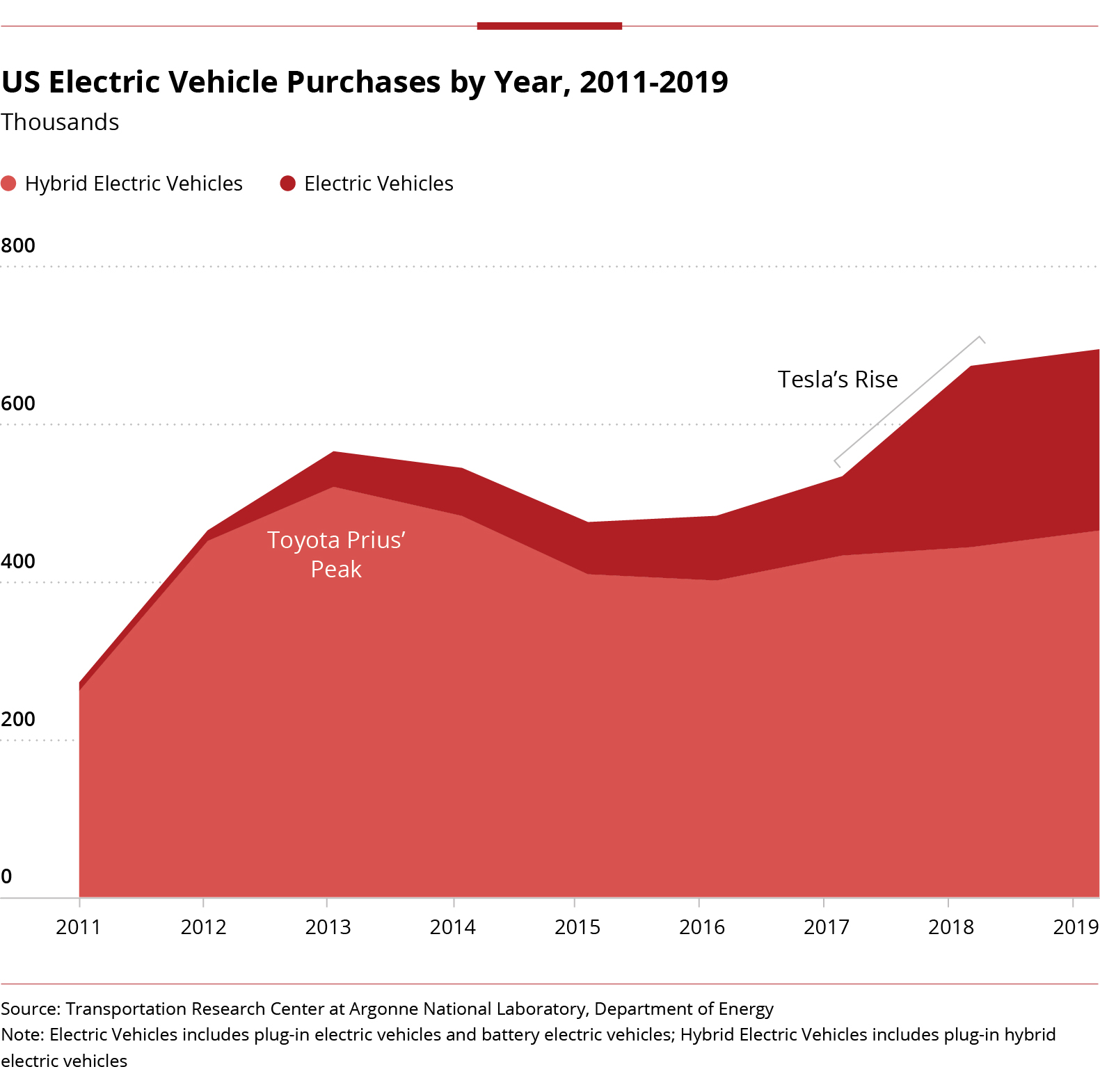 Nevertheless, challenges remain, particularly in the realm of batteries. One issue is vehicle range: across popular EV offerings (from Tesla, Chevrolet, and Nissan), battery capacities do not yet support ranges exceeding 400 miles.

This range can certainly work in some cases (e.g., last-mile delivery, urban commuting), but is impractical over longer distances, especially given that charging times for EVs are currently measured in hours—usually overnight—not minutes, like stops at a gas station.

Two other salient issues – both of which industry is actively addressing – are battery costs and weights. Currently, according to Avascent analysis, the battery in an EV costs roughly 40% of the entire vehicle’s MSRP, in the case of battery replacements for the popular Chevrolet Bolt. However, battery costs are estimated to fall significantly (by up to 30%) by 2023 as producers like Tesla and GM begin mass-producing new battery technologies.

More advanced batteries should also help tackle the challenge of battery weight. As batteries get larger, they become less efficient. This issue is being addressed by advances like GM’s Ultium battery, which uses less cobalt, and by “right-sizing” batteries to their specific applications. For DoD, right-sizing might include limiting battery sizes for base operation-focused electric military vehicles, where operating ranges – and therefore kilowatts needed – are lower.

Even with these well-known EV issues, industry is pursuing EVs wholeheartedly, and private consumers are adopting them at higher rates. Amid these trends, DoD should be constantly measuring industry’s EV capabilities and taking advantage of investments from some of its most trusted partners (e.g., Oshkosh, Mack, GM Defense, Navistar).

If DoD continues to procure ICE-powered vehicles while waiting for the “perfect” time to switch to EVs, the government, and the taxpayer, will end up paying too much to operate these ICE vehicles over their lifecycles.

There is no question that, for the time being, EVs are more expensive to acquire than ICE-driven ground vehicles. However, if procurement officials include lifecycle costs in their calculations, that balance may shift, since EVs have lower sustainment costs.

For example, recent analyses of EV and ICE-driven busses estimated that, after only 12 years of operation, EV busses became cheaper than their traditional counterparts.

Although this research may be optimistic, lower operating costs, along with acquisition costs that will continue to fall, mean that over time, the lifecycle cost-savings of electric military vehicles will outweigh their upfront cost increases.

This issue will vary for each fleet of electric military vehicles and should be studied by program executive offices (PEOs) responsible for next-generation acquisitions to ensure that DoD is making informed procurement decisions. 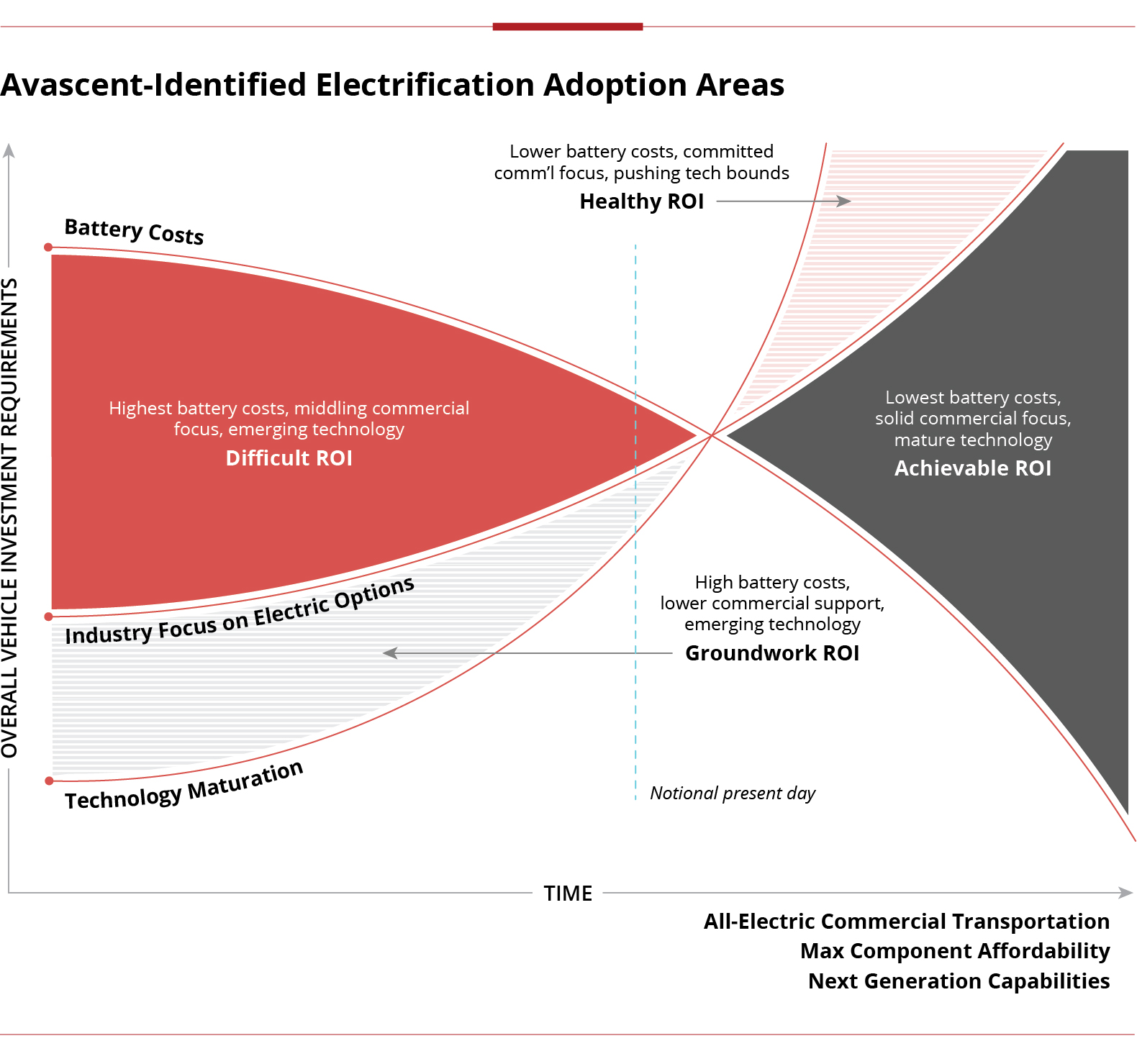 DoD has faced many obstacles to wholesale modernization of major vehicle fleets. It has struggled to match requirements with affordable technology and faced skepticism from Congress while sustaining ongoing operations, which limits its ability to shift quickly to new concepts and designs.

However, electric military vehicles pose significant lifecycle cost-savings and fit into the federal government’s broader push to align policy in a climate-protective stance.

These factors create a worthwhile – and potentially necessary – opportunity for the military to consider electrification applications and prepare for a future in which technology ROI is much harder to guarantee.

Current DoD priorities that would benefit immediately from a broad strategy roadmap include manned-unmanned teaming (MUM-T) with battery-powered ground-based robots and the US Army’s Small Multipurpose Equipment Transport (S-MET) vehicle.

While MUM-T has been most prominently used with airborne drones, DoD has gradually warmed to the idea that it can be used to ease the burden of the soldiers on the ground.

One of the RCV-L’s key features is a hybrid-diesel generator that can power silent watch and some stealth capabilities, limiting detection from advanced enemy forces.

The S-MET, a support “mule” for the Army, also an HEV, can generate power at 3 kilowatts of stationary power and 1 kilowatt while moving.

The lower stakes of robotic combat and support vehicles, combined with the DoD’s use of batteries to power vehicle subfunctions (such as silent watch), indicate they could be prime near-term candidates for full electrification as DoD pursues electric military vehicles.

In their current HEV configurations, they improve battlefield capabilities. Since these vehicles use EV batteries while the technology is still maturing, DoD can ensure it develops and maintains an understanding of the technology that may shape the most intense warfighting efforts of the future.

Leveraging this knowledge would enable DoD to shift to full EVs as technology advancements and battery cost decreases continue – a timeline approach that saves big-ticket vehicle electrification for when the ROI makes sense, without sacrificing here-and-now applications.

Another option for DoD to consider electrification starts far from the battlefield: base operations.

Since it replaced the ubiquitous M151 series Jeeps in 1984, HMMWV variants have served multiple uses, including on-base transportation. But as the push for climate-friendly solutions accelerates, the vehicle’s fuel economy, an estimated sub-10 miles per gallon, is likely to raise eyebrows, especially in transport roles.

While the HMMWV itself is slated to be replaced by the much larger Joint Light Tactical Vehicle (JLTV), which has seen generational gains in fuel efficiency, DoD may be able to take advantage of commercial industry efforts to improve behind-the-lines efficiency and long-term cost effectiveness for electric military vehicles.

General Motors’ Hummer EV, originally inspired by the Humvee, may have the power and capability to enable a military variant, as GM Defense leadership has suggested.

The Army has taken tentative steps in the right direction by announcing research into an electrified light reconnaissance vehicle (eLRV), which may bridge the gap between a commercial, golf-cart-sized vehicle and a rugged HMMWV EV.

The Army’s move has been supported by its interest in anti-idle technology, which “could significantly reduce some fuel consumption,” given the amount of time that vehicles spend idling, according to Robert “Eric” Fletcher, the deputy project manager for transportation systems.

Even without full electrification, DoD is beginning to acknowledge that electric military vehicles can offer fuel economy savings in addition to new tactical advantages like expeditionary power outside of base operations.

The value-add of an electrified HMMWV or Infantry Squad Vehicle (ISV) could make contracting sense as well. In late 2020, GM Defense began renovating its North Carolina production facility to build its new ISV under a $200 million-plus contract with the US Army.

For the DoD, familiarity with an established or committed partner would likely lower the risk of technological and quality control issues, and fewer moving parts in an electric vehicle could lower long-term sustainment costs, particularly for on-base vehicles that do not see the same level of wear-and-tear as their battlefield counterparts.

Additionally, adopting on-base electric military vehicles would buy the military more time to consider how to develop and support a robust global infrastructure in service to a modern, electrified fleet.

Pilot programs or a one-time infrastructure upgrade at key ground vehicle bases could pay dividends in the event the military needs to maintain and improve a fleet that looks markedly different than its current whatever-available-fuel configuration.

Multiple options, including solar-powered microgrids and high-powered charging stations, should be considered by DoD for future expeditionary applications. This analysis should consider cost as well as technology longevity, environmental effects, and alignment to DoD Concept of Operations (CONOPs).

What is unlikely to benefit the military is jumping into electrification with both feet, the risk of which could be mitigated by an overarching electrification strategy.

If the DoD’s strategy ends up being a smattering of high-cost, low-reward prototype efforts, the resulting sticker shock may stymie long-term fleet electrification efforts.

Starting with a lighter-weight, lower-cost electrified vehicle is far more likely to provide value-add to DoD than an attempt to build a multimillion-dollar electric fighting vehicle prototype before the cost-benefit analysis makes sense.

To mitigate the challenges of an electrification push, Avascent recommends the DoD consider a timeline for adopting electric military vehicles while taking advantage of existing technology, trends, and commercial partner action.

DoD does not need to leap toward technologies that remain unproven, but it can and should work to be a fast follower of industry innovation.

Demand for electricity within the military’s vehicle fleet is only growing, and the ambitious goals DoD has set for itself to be ready for a 21st century environment necessitate strategic thinking. 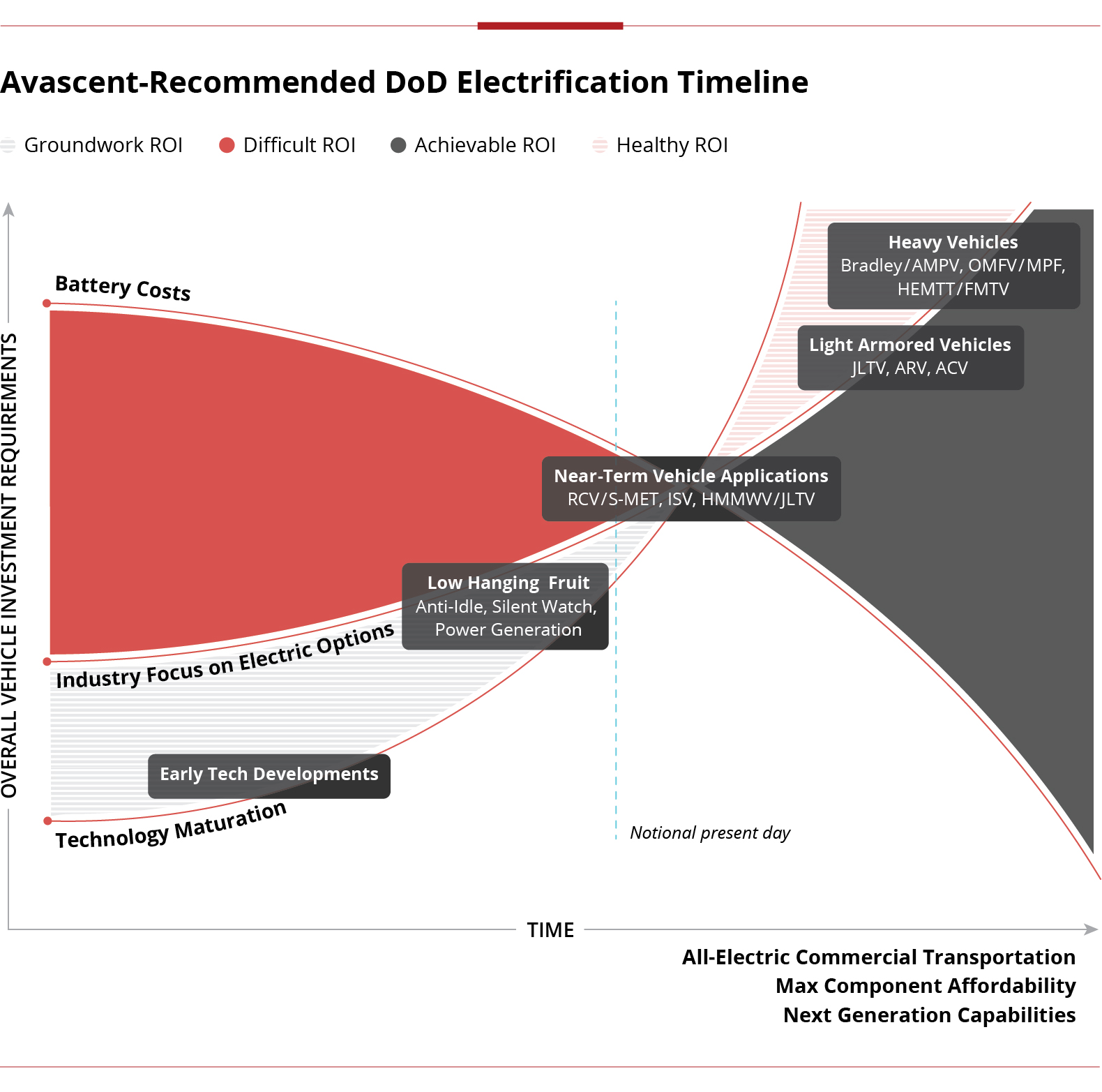