Do Postmen Dream of Electric Jeeps? Lessons Learned for Government Contractors from the USPS Next Generation Delivery Vehicle (NGDV) Award

The award of the US Postal Service (USPS) Next Generation Delivery Vehicle (NGDV) to Oshkosh Defense followed very quickly on February 23. Oshkosh’s plan to incrementally, rather than immediately, transition the NGDV fleet to electric vehicles created substantial buzz in the political, automotive, environmental, and investing trade press.

However, the decision was not seen as controversial in the government contracting world. Experts in that field understand the government balances a large number of decision factors over years-long experimentation and selection processes that is immune to rapid media cycles or even Executive Orders late in the game.

5 Lessons Learned from the NGDV Award for Industry

What accounts for this difference in perspective? What can defense industry players learn from Oshkosh Defense’s experience? Finally, what lessons can new entrants to defense and government markets learn about how to win large government programs?

You only have to look at the vehicle the NGDV will replace to understand how different government customer expectations are from commercial.

The Long Life Vehicle (LLV) is the largest and oldest component of the USPS fleet. Awarded in 1985 to Grumman, another prominent defense contractor at the time, the LLV was designed, as the name implies, for a much longer lifespan than a commercial off-the-shelf (COTS) vehicle, despite using many COTS components.

While originally specified for a 24 year lifespan, a portion of the fleet will be 35 years when it is replaced by the NGDV.

Once hailed as highly innovative, the LLV is now maligned as dangerous, outdated, expensive to operate, and highly pollutive (and not just when hundreds are being damaged or destroyed in unexplainable fires).

Safety technology has progressed significantly over the last 30 years and even supposed “comfort” features like air conditioning—absent from the LLV—are recognized as critical for driver safety.

The NGDV completely rebaselines the safety, technology, fuel efficiency, and emissions performance of the LLV while retaining its long life and specialized requirements. Whether there were other ways to achieve the same lifecycle cost objectives, the US government has long defined platform longevity as a core value proposition.

The staying power of each initiative is not assured – Congress, new Defense Department appointees, and industry all have a voice. High-profile failures are sure to have a chilling effect.

However, two things are clear:

There were many speculating that Biden’s Executive Order intended to hand the NGDV competition to Workhorse, a Battery Electric Vehicle (EV) contender.

That obviously proved to be untrue—but why were so many quick to believe that narrative? They probably were less familiar with government-run competitive bids, of which the NGDV competition is a prime example.

The NGDV competitive program ran from January 2015 to February 2021. The long, intense prototype evaluation process, required safety changes to prototypes, and changing economic/political landscapes caused attrition of suppliers over the course of the program. 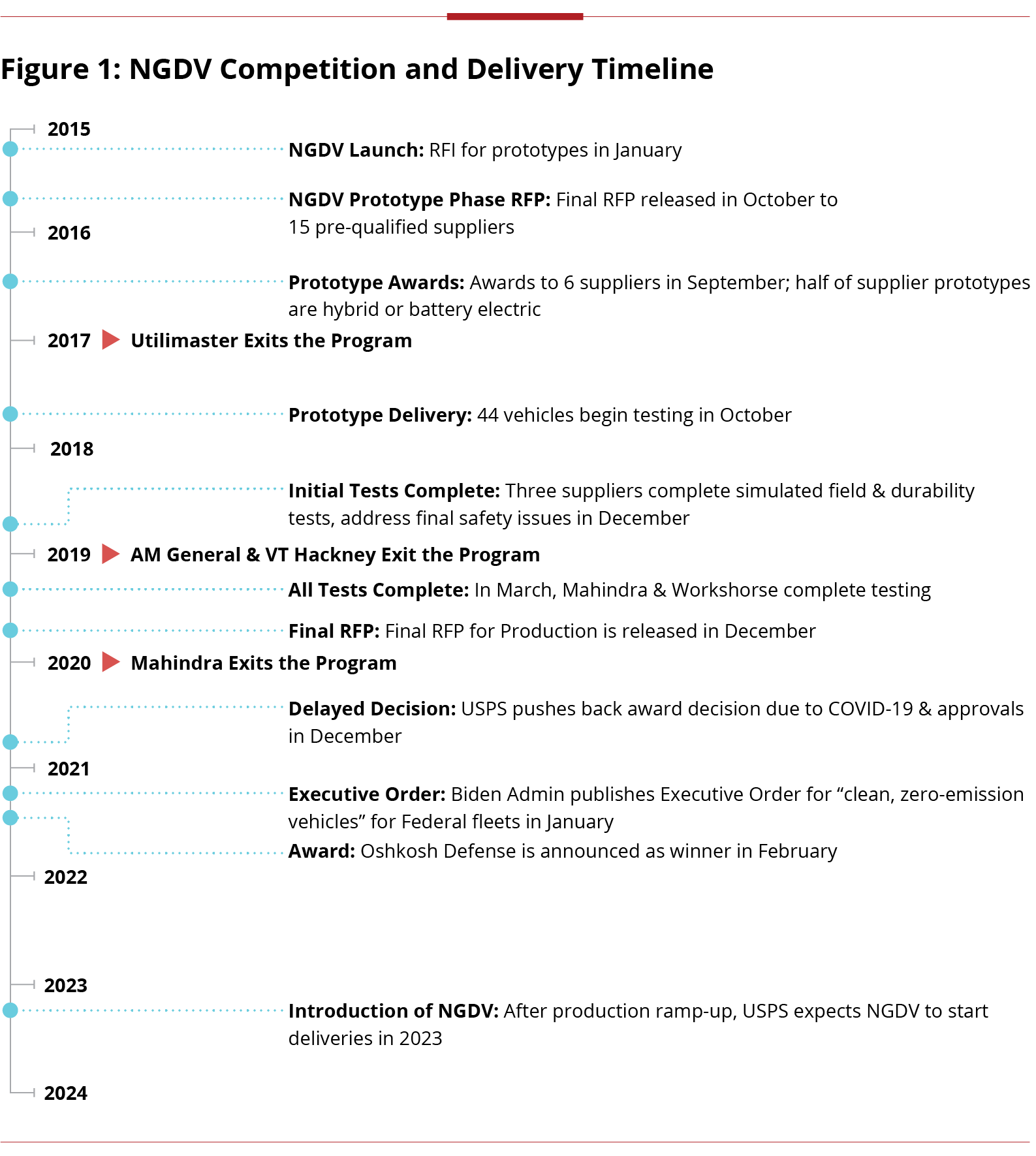 Through the entire six-year process, the USPS made a point to remain unbiased by limiting direct oversight of supplier designs, preventing conflicts of interest, and restricting public communications by its own evaluators and the competitors.

The USPS couldn’t simply pick another winner based on alignment with an Executive Order that came years too late to influence the process.

So how did Oshkosh Defense win? The USPS has stated officially that the award to Oshkosh was based on “extensive testing of prototype vehicles, evaluation of offered production proposals, and discussions of technical specifications with the offerors.” According to a 2020 USPS OIG report on NGDV, technical evaluation criteria for the production contract award were:

The technical evaluation was then weighed against total cost of ownership (including acquisition price and lifecycle cost calculations) and risk.

From a Design Quality and Technical Approach standpoint, occupant safety seems to have been a major factor.

Supplier Capability, Past Performance, and Risk were also likely significant factors. Workhorse admits in its 2020 Annual Report that it has “relatively limited experience to date in manufacturing the C-1000 at high volumes” due to limitations in workforce, supply chain, and manufacturing processes, and that it had net sales of only $1.4M in 2020 (up from <$400K in 2019).

Workhorse had originally teamed with VT Hackney, a company with significant USPS past performance and credibility—but the team broke up on the eve of the final bid submissions in 2020.

While Workhorse intends to pursue whatever legal and contractual remedies are available to them, there seems to be little chance of changing the outcome based on its lack of readiness for a program of this magnitude.

Oshkosh ultimately outlasted four competitors that withdrew their offerings before the production award and provided a more compelling proposal than the remaining two.

In a 6-year long, multi-phase competitive government procurement with substantial oversight and real-world prototype testing, it is reasonable to assume this was a fair outcome, although due to non-disclosure agreements the USPS associated with the bid, both the winner and losers have been tight-lipped about their specific evaluation factors.

Now the focus for Oshkosh Defense will be on keeping the program sold, no easy task with so many special interests and disaffected competitors.

Lesson 4: Winners Nail the Price: Should Cost, Will Cost, and Death Spirals

A program’s “Should-Cost” Target represents what the Program Manager believes the program ought to cost if identified cost saving initiatives are achieved. Industry competitors must be aware that the customer is always looking for optimized cost solutions that fit their “Will Cost,” which is what they have budgeted.

The USPS, a self-funded entity, has been planning to replace LLV since at least 2010 but has been hampered by budgetary problems, including the long-term impacts of the Postal Accountability and Enhancement Act of 2006, nearly $10B in annual operating losses ($9.2B in 2020, up $363M compared to 2019 despite a $2B increase in revenue), and a $700M+ annual bill to maintain the current LLV fleet (among other maintenance and operational costs).

EVs are recognized as being far more expensive (in some cases as much as twice as much) to acquire initially than conventional vehicles.

House Democrats have introduced a bill to provide $6B to support acquiring an electric fleet, but at the time of the decision (and even now since the funding bill has not become law) the expense would have overwhelmed the USPS.

Total cost of ownership, where EVs typically have an advantage over a 15-20 year timeframe, was weighed in the competition—but it was only one factor among many.

The USPS faced what is called a “Death Spiral” of deferred modernization, whereby the increased sustainment costs of an aging platform consume the funds needed to replace it. 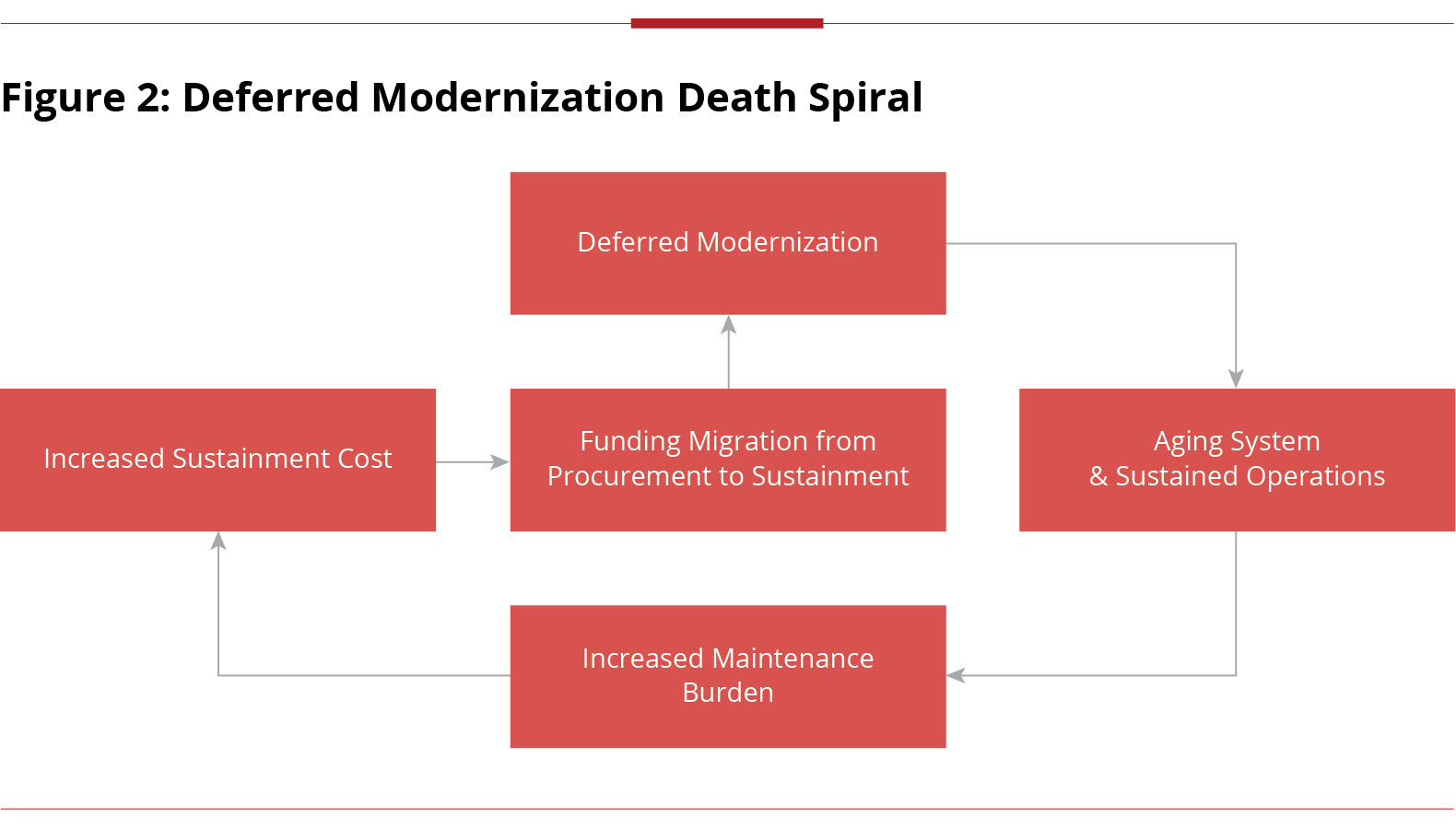 Some politicians and interest groups are insisting that the USPS start over the competition for the NGDV and specify an electric powertrain, which they believe is mandated by the Biden Executive Order.

However, this would only exacerbate the death spiral: With six years to select a new winner and two years to ramp-up production, the in-service date of a new delivery vehicle would likely be close to 2030.

Hundreds of additional LLVs will likely be consumed in fires as maintenance costs continue to rise. Start-up EV companies like Workhorse will be required to invest millions of their own dollars to sustain competition, and Oshkosh Defense may or may not resubmit a bid after investing millions to play by the rules only to have their order cancelled through political interference.

The award is an indefinite delivery, indefinite quantity (IDIQ) contract, meaning that after an initial dollar commitment, the USPS will have the ongoing ability to order more NGDVs over the 10-year period should Oshkosh perform well (and fewer if they do not).

Likewise, the USPS has emphasized that the contract is only the first part of a multi-billion-dollar, 10-year effort to replace the Postal Service’s delivery vehicle fleet of more than 230,000 vehicles in every class.

The Oshkosh NGDV will be equipped with a host of safety features that postal carriers require: 360-degree cameras, advanced braking and traction control, air bags, and a front- and rear-collision avoidance system that includes visual, audio warning, and automatic braking. The vehicles are optimized for eCommerce package delivery rather than first class letters.

And, most importantly, they will have multiple powertrain options: either much more fuel-efficient internal combustion engines than the current LLV or battery electric powertrains.

Likewise, through the IDIQ contract NGDV can be retrofitted to keep pace with advances in electric vehicle technologies as they emerge. The “floor” percentage of EVs has been stated as 10%—should additional funding be available, that number could grow significantly.

Considering the limitations of BEV offerings, including the withdrawal of multiple bidders and the previously cited Workhorse limitations, the USPS has bet on a gradual electrification strategy for NGDV.

While this may not be the “vanguard” approach to electrification that many were hoping for, it will provide significant benefits across the EV landscape, legitimize the technology and its business case, and ultimately lead to wider scale adoption.

While failure is not an option for the USPS with regard to replacement of the LLV, failure of EVs in this critical application might have tarnished perception of EVs for decades.

Oshkosh won by providing the USPS with a low-risk EV transition strategy while also offering assured safety, a proven manufacturing approach, and a within-budget price point, proving that in USG contracting, buzz only gets you so far.

With thanks to Connor Funk, who also contributed to this article.

December 16, 2021
A Burning Platform for Building Bridges: Expanding the National Security Innovation Base

Fast Followers: A Roadmap for the DoD’s Adoption of Electric Military VehiclesProving Ground