While the specific discussion was off they record, topics covered included changing barriers to entry, new technologies and business models, the evolving role of government in space, and changing risk profiles at different stages of the value chain.

Wharton Aerospace is an association of senior executives and invitation-only guests, who share a commitment to the commercial aerospace & defense industries. It conducts by-invitation-only conferences on the Wharton campuses in Philadelphia and San Francisco to foster closer ties between the Wharton School, our Wharton Aerospace participants, and the industrial base. 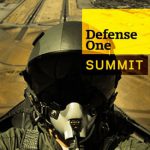