Data Stories: How Nordic Defense Spending Compares to the Rest of Europe

Russia’s annexation of Crimea in 2014 sent shockwaves throughout Europe, causing many countries in the region to rethink their military funding.

The tension is particularly palpable in the Baltic Sea where Russia has conducted war games with the Chinese Navy and has had several run-ins with NATO allies operating in the region.

Given the proximity to Russia, Nordic countries have been taking measures to shore up their defenses, but how does their defense spending compare to the rest of Europe?

Use the filters at the top of the chart to compare the current year defense budget to 2018 defense spending.

The movement of Russian missiles to Kaliningrad capable of reaching Copenhagen have put added pressure on Demark to maintain operational readiness in the region. Despite a growing economy, costly military acquisitions, and pressure from Russia, Denmark’s defense spending falls below NATO’s 2% threshold.

Denmark’s defense budget currently competes with the country’s extensive welfare system. A draft of Denmark’s budget released at the end of August was recently criticized for not allocating enough funding to welfare, though it did promote an increase to the country’s military.

Denmark’s prime minister has called for the defense budget to increase 20% per year until 2023, but this is unlikely to materialize.

Sweden swiftly approved an additional $317 million defense increase per year from 2018 to 2020, but defense spending continues to hover around 1% of GDP. Sweden is bolstering their defense with the likely acquisition of a new air-and-missile defense system, and even reintroduced conscription after ending the mandated military service in 2010, with as many as 8,000 citizens expected to enlist by 2022.

While Sweden continues to maintain its neutrality, and has repeatedly stated that they will not join NATO, it is clear they are concerned about Russia’s military assertiveness in the Baltic Sea.

Like Sweden, Finland maintains a neutral position and is not a NATO member. Finland’s defense policy released in early 2017 claimed that Russia did not represent a direct threat to the country, but highlighted concerns over Russia’s influence in the region, including the continued occupation of Crimea in Ukraine.

It also shares a border of over 800 miles with Russia. Despite these concerns, Finland’s defense budget remains stagnant, largely due to lackluster economic growth. Finland’s GDP has yet to rebound to levels before the financial crisis, ultimately hampering any significant defense increases in the near term.

Norway’s near-term defense spending boost is largely due cost saving efforts by the government and the reallocation of those funds to the military.

See how Nordic countries compare to the rest of Europe below by filtering by region.

Avascent Analytics calculated defense spending by percent of GDP in terms of the country’s local currency. The 2012-2017 defense CAGR was determined by converting the defense budget to USD and calculating the CAGR from there. 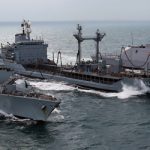