The world is changing rapidly, and all branches of the US military are making fundamental changes in how they address a dynamic threat environment.

The 2023 Department of Defense Presidential Budget Request indicates a sustained focus on modernization, particularly on breakthrough technologies sourced from a more diverse and agile industrial base.

This group of companies is part of a broader cohort of defense unicorns that we refer to as the “SHARPE” cohort:

These companies are focused on applying cutting-edge technologies—AI, machine learning, big data, autonomy, and others—to national security challenges so the US can retain overmatch capability against its adversaries.

From a private capital allocation perspective, the recent emergence of SHARPE companies is noteworthy. After a multi-decade hiatus, Silicon Valley investors are once again seriously focused on the market opportunity within national security, and blue-chip venture firms are investing significantly in defense technology, signaling potential in the future of the defense market.

While interest is strong at the moment, will it remain so over the long term?

In exploring this question, we found several parallels between the automotive and defense markets and, specifically, the relatively recent but now material impact that “new auto” tech companies are having upon the auto sector.

How can an investor quantify the impact the SHARPE cohort is having on the defense industry? Three metrics demonstrate the transformative impact new auto has had on its market:

By evaluating the SHARPE cohort against these indicators, investors can assess the scale and pace of their disruptive role in the market.

Just as the enduring emphasis on automotive technology and rise of electric vehicles has propelled the growth of new auto, DoD modernization priorities are focused more than ever on capabilities such as geospatial analytics.

Such capabilities tend to benefit from commercial applications and development, and typically are developed by newer, more agile players. [1] [4] 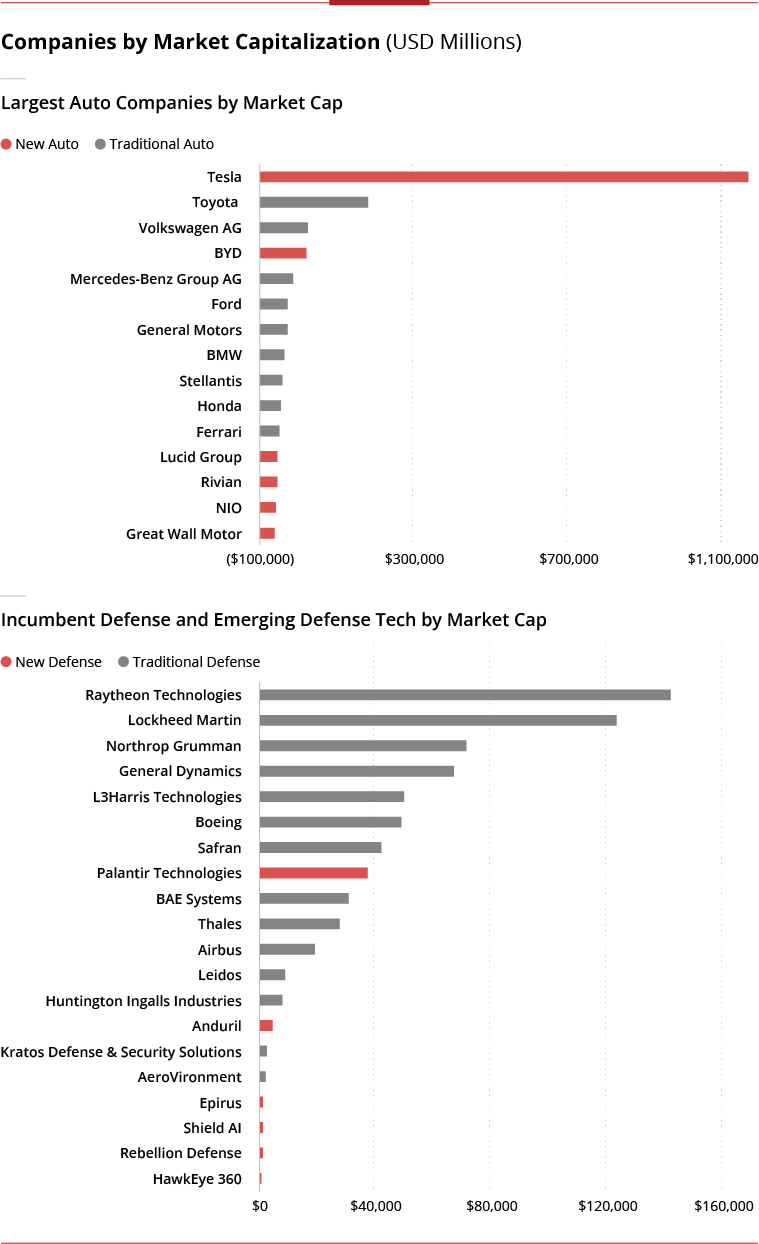 Manufacturers focused on electrification, most notably Tesla, have captured significant market investment from traditional OEMs. Today, they own approximately 50% of the automotive industry’s aggregate market capitalization, while accounting for only 9% of new vehicle sales. [2]

However, Palantir’s growth and position as a prime on large-scale programs of record like Distributed Common Ground System-Army provides a potential model for SHARPE’s successful competition with the legacy giants. 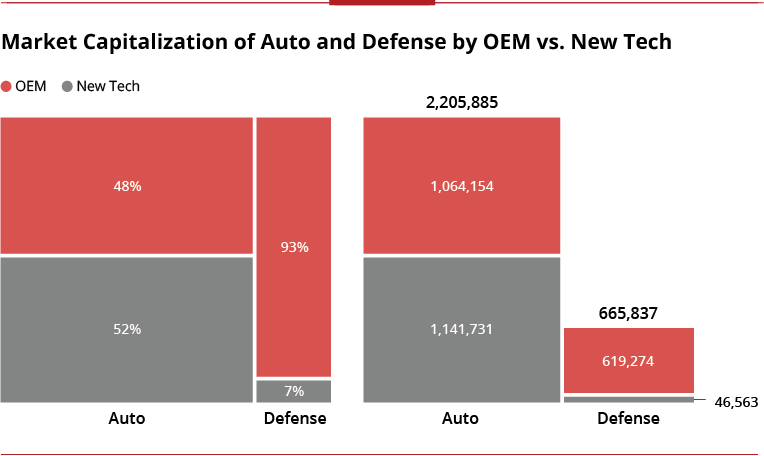 Spiking new auto valuations and growth reflect not only shifting industry priorities and consumer preferences but also the expansion of an auto-oriented manufacturer’s addressable market beyond traditional applications.

At the forefront of the auto tech revolution, Tesla and Lucid Group surpassed $500M+ valuations in six and eleven years, respectively.

Since then, auto tech companies have been surpassing the $500M valuation milestone in increasingly shorter timespans as investors recognize the value being created by the paradigm shift underway in the industry.

Much like Tesla and Lucid Group in auto tech, Palantir was an early mover within defense tech, achieving a $500 million-plus valuation in seven years.

Following Palantir, SHARPE companies have been achieving $500 million-plus valuations in relatively expedited timeframes despite their early-state or relatively unproven technologies, similar to trends within automotive technology.

Recently, Anduril and Rebellion Defense surpassed this threshold within two years of their respective formations. [3]

Current valuations of these defense tech players reflect investor focus on a longer-term strategic vision, with multiples often tied to earnings that are projected for several years in the future, and an expectation that these innovators will capture significant share from legacy defense OEMs. 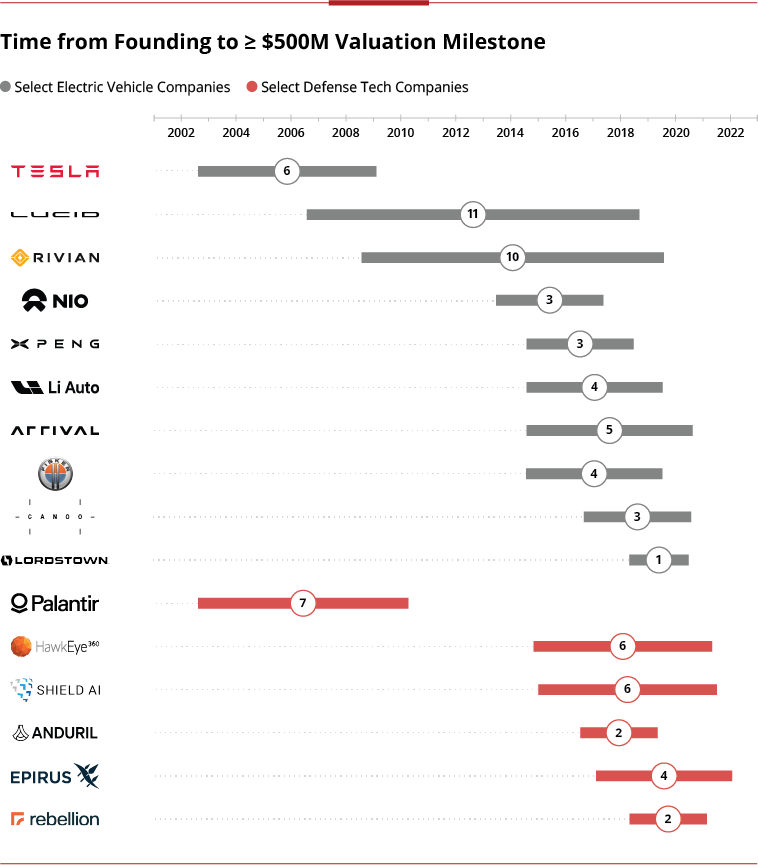 With SHARPE here to stay, these early unicorns will continue to attract investor attention and additional players will seek to raise capital at similarly strong valuations. How should investors think about the staying power of early entrant valuations and the valuation of new entrants?

Additionally, investors should consider the extent to which the SHARPE cohort can materially gain share in key segments against traditional primes, and how commercial markets could broaden their TAMs.

Future cash flow for SHARPE is an open question. The US Government (“USG”) has historically approached procurement under rules and regulations different than those in the commercial sector.

Even with a 4% topline increase in FY2023 Presidential Budget including a 10% increase in research, development, test, and evaluation (RDT&E) funding over 2022, defense budgets are relatively well-defined and capped compared to other markets.

Most likely, the large, needle-moving DoD programs will remain platforms and systems owned by primes. However, the stated criticality of new defense technologies like artificial intelligence and cybersecurity to nearly every DoD mission and system indicates these technologies will be embedded in large enterprise and mission systems.

With nearly limitless applications for new defense technologies across DoD programs, investors must look to differentiators between the hundreds of new players securing footholds in DoD dual-use technology investment.

First-mover advantage in key emerging segments, as demonstrated by Hawkeye 360 in RF geoanalytics and Shield AI in unmanned systems artificial intelligence, may become a key driver of perceived value.

SHARPE should expect to see both countermoves and partnering outreach from traditional primes seeking to contain, exploit, or propel the disruptive impact of innovation.

Just as traditional primes are looking to harness commercial technology, SHARPE may need to bolster access to “traditional” technology to compete more like an OEM in the DoD market.

It is also possible that defense start-ups could introduce technology with future applications within the broader commercial market that dwarf the size of their initial use cases for national security applications.

By extension, SHARPE valuations may not be strictly defense multiples, instead representing the potential to expand into larger commercial end markets.

Will the Market Continue to Believe in Defense Innovation?

As the DoD shifts focus to near-peer adversaries, technological innovation is essential to maintaining the US’s global position. The DoD has increasingly turned to start-ups and Silicon Valley to catalyze innovation.

Recent history within the automotive market provides a potential template for similar growth and rapid innovation within the defense space.

However, an important distinction within the two markets is the role of government. The current USG acquisition and contracting process significantly impacts adoption rates, feedback cycles, and profitability and growth potential of defense suppliers.

Meaningful improvements to that process would be enormously beneficial for both the market and national security, and while the likelihood for timely improvement of the procurement process is uncertain, the substantial capital investment to date and current valuations of SHARPE signal overall investor optimism in the future potential of defense technology.

About Avascent and Harris Williams