As the SEC and other federal entities consider new environmental, social, and governance (ESG) disclosure regulations, it is worth reviewing the compliance measures that US government contractors have had to meet for decades.

Many of these compliance measures align with issue areas covered under today’s ESG frameworks. In some ways, government contractors have long been evaluated against ESG-standards at levels above and beyond those applied to other private sector companies.

Many of the early environmental requirements that the government imposed on contractors focused on strict measures dealing with water, air, and waste pollution. While all companies are subject to these regulations, government contractors operating on government land or running government facilities often must meet a higher standard.

In its role as the world’s largest single consumer, the US federal government has also sought to leverage its procurement power to drive green outcomes, showing preference for government contractors that can supply energy efficient products and services.

In 1976, Congress passed the Resource Conservation and Recovery Act which, among other things, established a preference for acquisition of recyclable goods.

In May 2011, the FAR was amended to ensure that 95 percent of new contract actions go to contractors that can supply sustainable products that are:

Most recently, in 2021, President Biden signed EO 14030, which seeks to explore how federal procurement can be leveraged as a core means to help federal government reach net-zero carbon emissions by 2050, including a requirement that federal suppliers disclose GHG emissions. 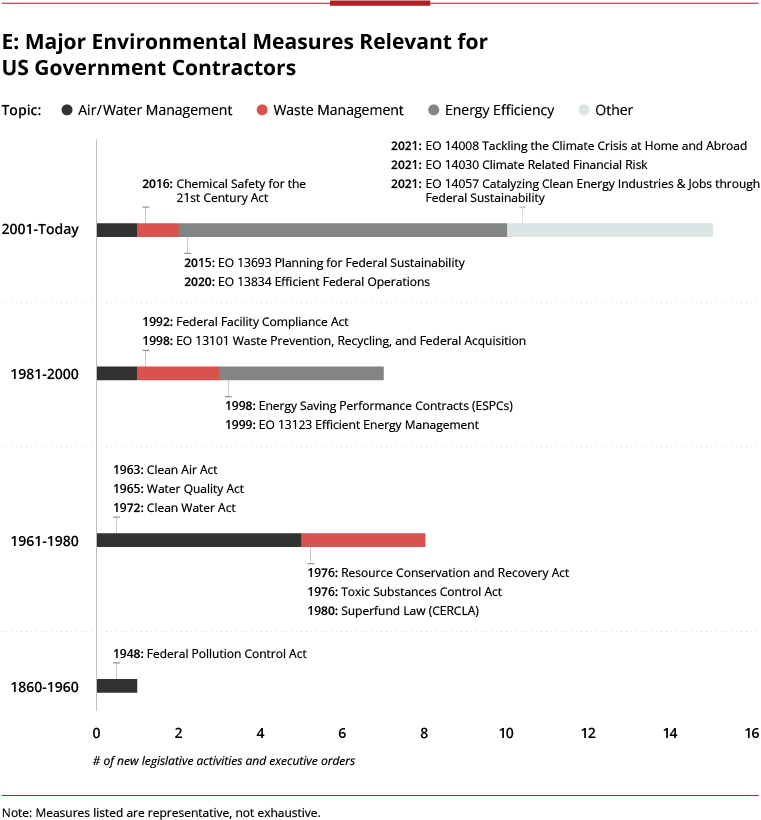 The USG has also been forward leaning in ensuring that government contractors maintain fair labor standards and safe and healthy workplaces.

In 1868, Congress overrode President Johnson’s veto to enact an “Eight Hour Work Law” that mandated laborers and mechanics employed by the federal government only had to work eight hours a day.

The US government has also pressed federal contractors to develop diverse, inclusive workforces. After African American leaders were blocked from taking jobs in segregated war production facilities, President Franklin D Roosevelt in 1941 signed EO 8802 which outlawed discrimination based on race, color, creed, and national origin in the federal government and defense industries (later extended under EO 9364 to all federal government contractors).

Congress passed the Equal Opportunity Act (1972), Rehabilitation Act (1973), and the Vietnam Era Veteran’s Readjustment Assistance Act (1974) to address discrimination and expand opportunities for African Americans and other minorities, individuals with disabilities, and veterans.

Most recently, President Obama in 2014 amended EO 11246 which prohibits federal contractors from discriminating on basis of sexual orientation or gender identity. In addition to these nondiscrimination requirements, every federal contractor of a certain size must file an Affirmative Action Plan (AAP) outlining how the company is taking proactive steps to recruit and advance underrepresented minorities in the workforce. 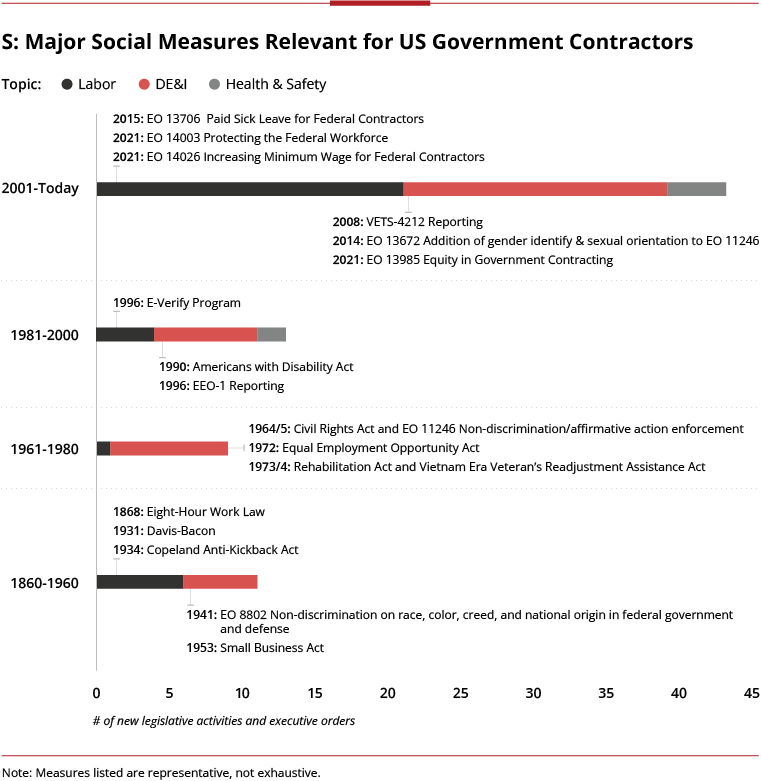 Given government contractors are paid via taxpayer dollars, there is special emphasis on ethics and prevention of bribery and corruption in the distribution of those dollars. As early as 1863, the False Claims Act (Lincoln Act) was passed which mandated that contractors with federal contract awards of at least $5M are subject to Federal Acquisition Regulation (FAR) ethics rules.

In 1961, Congress passed The Trust in Negotiation Act which require contractors with contracts over $500K to certify any cost data submitted. Further efforts to prevent bribery and corruption in federal contracting including the Foreign Corrupt Practices Act (1977), The Federal Anti-Bribery Statue (1984), and the Procurement Integrity Act (1989).

Presidents from Ronald Reagan to Herbert Hoover to Donald Trump to Joe Biden have all overseen legislation or signed executive orders to push federal procurement to buy American products and services.

One of the most dynamic governance topics for government contractors in last two decades has been data protection/cybersecurity. In 2003, NIST 800-171 was published which outlined new rules for contractors when managing controlled unclassified information.

In 2007, the FAR was updated to outline rules for contractors regarding patents, data, and copyright laws. Under President Obama’s tenure, several executive orders and new legislation (e.g., FISMA) were signed which pushed the government to develop new standards for government contractor ownership and use of government data. 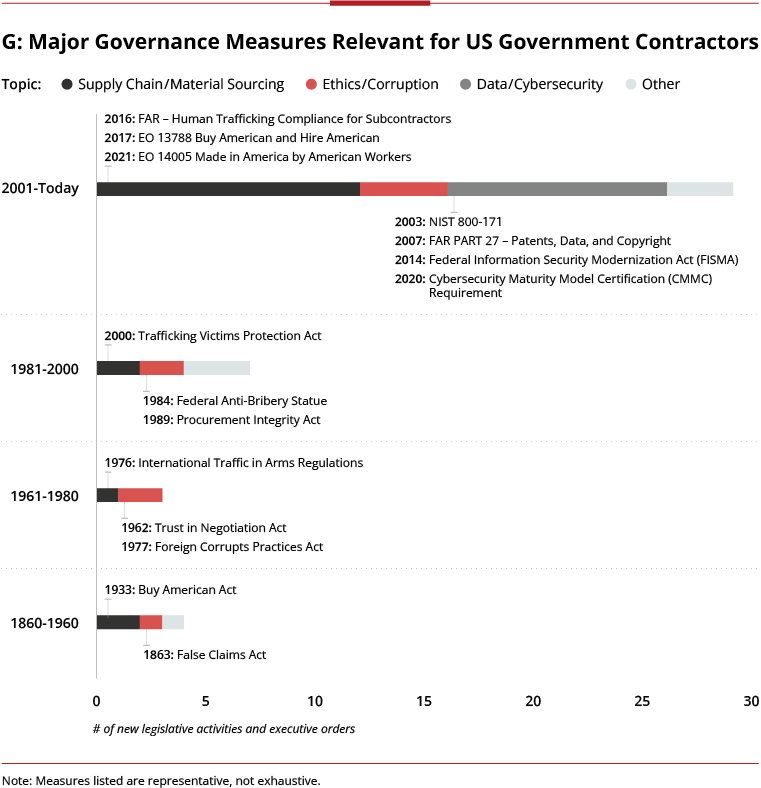 Several rules now under consideration would mandate additional ESG-related disclosures for government contractors. For example, in July 2021, the US Department of Defense published an RFI asking for companies to comment on efforts in measuring GHG, ESG, and supply chain risks.

In many ways, government contractors are far better prepared to meet the increased scrutiny generated by the ESG movement. While there are always areas for improvement, these companies recognize that their policies and operations are subject to strict public oversight.

Moreover, government contractors seeking to grow their business will likely have to go beyond simply meeting existing compliance requirements.

The US government will increasingly be looking to procure from government contractors that have incorporated responsible internal practices and processes and that have crafted a sustainable portfolio of offerings.

To take advantage of this opportunity, government contractors should ensure that they are viewing ESG topics as paths to build long-term financial growth and drive value creation, rather than simply as risk mitigation tools.