The aviation industry’s quick roll-back of its operations in Russia in the midst of the invasion of Ukraine ­– a move that, while politically necessary, disrupted supply chains, fleets, flight paths, and revenue across the globe – may be a harbinger of future, much larger disruptions with the US’s other key near-peer competitor, China.

Especially given recent developments in the so-called “Taiwan question,” from President Biden’s apparent departure from legacy US Taiwan policy to increased PLA* activity in and around the Taiwan Strait, a Chinese escalation of the conflict over Taiwan seems increasingly likely.

As a commercial and government-driven industry, aviation is particularly exposed to the consequences of such a conflict across military, social, geopolitical, and economic realms, and even the most optimistic scenarios present challenges to companies up and down the aviation value chain.

This threat is not without precedent – from Google’s withdrawal over censorship and security concerns in 2010 to current US sanctions on Xinjiang cotton over human rights concerns affecting the likes of H&M, Adidas, and Nike, Western companies are often taking risks when staking their business success on the large but unpredictable Chinese market.

The Chinese aviation market is no different, and the status quo that has benefitted both China and the Western aviation industry is shifting in ways that will be fundamentally disruptive to current business outlooks in China. 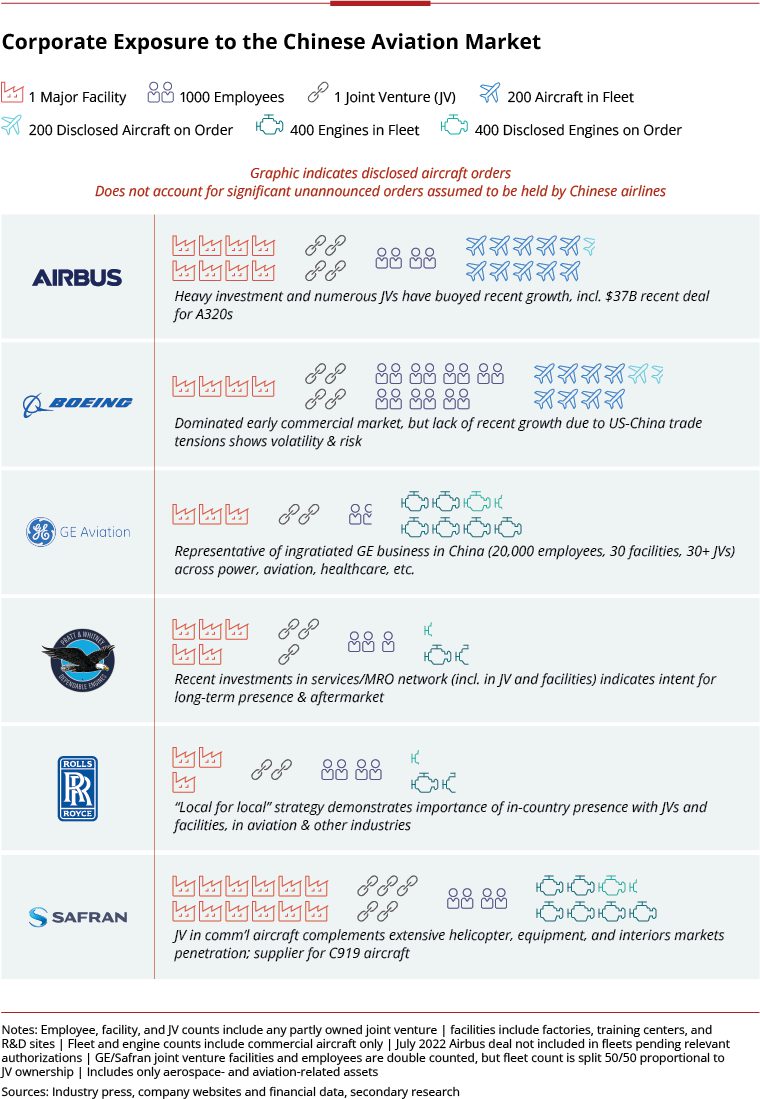 For the largest aircraft OEMs** – Boeing and Airbus – the opportunities for revenue growth in the massive Chinese aviation market have long outweighed its risks, including elsewhere-unacceptable threats to intellectual property, Chinese government interference, and questionable business practices.

The benefits of this trade-off are clear, as evidenced by the July 2022 Airbus announcement of a $37B deal with several state-owned Chinese airlines to deliver nearly 300 A320 aircraft.

However, an acute political or military conflict may finally tip these scales in the other direction to make continued business untenable, threatening the prodigious growth and high proportion of current order backlogs that manufacturers have come to rely on from the Chinese aviation market.

If relations between the US and its allies and China sour, aircraft and engine manufacturers – as well as the components and subsystem suppliers that support them – risk losing massive future revenues and jeopardize prior investments in Chinese infrastructure and operations, especially if they are without an advance plan for mitigation.

On the contrary, these Western aviation companies have spent decades ingratiating their businesses with the Chinese government, agreeing to build offices and factories in Chinese economic centers and forming joint ventures with Chinese state-owned enterprises, ostensibly in exchange for market access.

Even still, the Chinese government has made clear its aspirations to eventually manufacture aircraft domestically as a matter of national security and industrial policy; its guiding “Made in China 2025” strategic planning and industrial policy document specifically calls out the Chinese aviation market as an area where China is seeking to achieve “independence” from foreign suppliers.

China’s early grounding of the Boeing 737 MAX, breaking with FAA policy and asserting symbolic independence from the US aviation establishment, is one example of these nationalistic ambitions; another may be the sprawling cases of hacking and intellectual property theft, backed by the Chinese government and targeting western aerospace companies.

Even still, efforts thus far to produce an airworthy ”domestic” Chinese aircraft have had mixed results, with its most successful aircraft –the COMAC C919 — still yet uncertified and with an order outlook supported almost entirely by state-owned domestic airlines.

All told, though the aviation industry appears to have been spared the most devastating effects of this large-scale divestiture from Russia, a commensurate disruption with China would have a far greater effect due to the scale of business in the Chinese aviation market and the scope of risk exposure that these major OEMs have accepted — not to mention that China may also be taking a lesson from Russia and making plans to insulate itself from sanctions.

Even absent a rapid change caused by war or invasion, China’s ambitions for eventually phasing out its reliance on imported aircraft place its Western suppliers on a crash course for an unfair and unfriendly market, which will require a fundamental shift in how the aviation industry operates and relies on Chinese business.

The future of the Chinese aviation market presents this variety of issues to any Western company that relies on it for business; these companies should be asking questions and developing strategies now to avoid being caught flat-footed in a foreseeable but highly disruptive geopolitical transformation.

A First Look at the Next-Gen Regional Aircraft Industry LandscapeAltimeter