Beyond Unmanned: The Human Implications of Autonomous Systems and Remotely Piloted Vehicles

By Rachel Cross-Calvert
Posted November 21, 2018
In Company News
Beyond Unmanned: The Human Implications of Autonomous Systems and Remotely Piloted Vehicles2018-11-212019-10-11https://www.avascent.com/wp-content/uploads/2018/08/avascent_logo_140x83.pngAvascenthttps://www.avascent.com/wp-content/uploads/2018/11/avascent_company_news_beyond_unmanned.jpg200px200px

When we think about unmanned systems, the human implication is often neglected.

Vincent Vidal, the Deputy General Manager of U.S. Commercial Solutions at Insitu, highlighted this in his opening statement at an Avascent-sponsored panel on autonomous systems at AIAC’s 2018 Canadian Aerospace Summit.

Moderated by Avascent Executive Advisor Lieutenant-General (ret.) Michael Day, the panel opened with examples of how RPAS are being used today in industry, the future of the airspace ecosystem, and how counter-RPAS technology plays a role in preventing threats.

As the conversation moved toward the specific context of Canadian society, panelists noted that there is no one body responsible for RPAS regulations or traffic management. Reflecting on his own experience conducting counter-RPAS experiments at CFB Suffield, Dithurbide remarked that significant coordination was required between several organizations.

Throughout the panel, several key recommendations emerged. When asked what kind of steps will be required at the federal level, Vidal suggested an increased focus on the discovery phase, involving the ultimate end user to develop a use case and an appropriate market price. Norman highlighted the importance of evaluating the consequences of failure at every stage, and of layering safety throughout the ecosystem. Integration of a disruptive technology takes time, but all panelists agreed that a focus on the potential problem-solving value of RPAS – while taking proper consideration for coordination and planning – would help society see this technology as an enhancement to the current economy and not a replacement for people or jobs.

The panel closed with a definitive agreement: Canada is uniquely positioned to become a thought leader and pioneer in the RPAS space.

Owing to expansive swaths of sparsely populated land, a substantial resource industry, and the presence of remote communities, Canada has the opportunity to conduct extensive testing and trial implementations of everything from vehicles, regulations, and air traffic management concepts to identification technologies in a rare low-risk environment. Whether that initiative comes from industry, government, or a partnership of some other form remains to be seen.

With a projected 17% CAGR in Canada to 2022, RPAS industry growth outstrips the general aerospace industry by 14% and has both significant implications and opportunities for all involved. 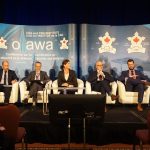 Panel Recap: Building the Industrial Base in a Competitive and Controlled SpaceCompany News