Getting in on the Lab Floor: Industry Must Adapt to Pentagon RDT&E Shifts

By Josh Pavluk and Sebastian Sobolev
Posted September 30, 2019
In Perspectives
Getting in on the Lab Floor: Industry Must Adapt to Pentagon RDT&E Shifts2019-09-302020-03-19https://www.avascent.com/wp-content/uploads/2018/08/avascent_logo_140x83.pngAvascenthttps://www.avascent.com/wp-content/uploads/2020/01/avascent_newsinsights_whitepaper_gettinginonthelabfloor.jpg200px200px

This expansion is part of a broader trend: from FY16 through FY19, RDT&E spending rose substantially by an 11 percent compound annual growth rate and has consistently outpaced the overall Department of Defense (DoD) budget. This funding will peak at over $100 billion in 2020 with the first budget request designed to fully reflect the priorities of the NDS.

Yet despite the growth, there are expected to be fewer new development programs than in the past. Nearly 90 percent of the later stage research and development funding is already effectively spoken for by a handful of programs. These programs will offer opportunity for some industry players, but they are competitive and limited in number.

Alternatively, future-oriented Science and Technology (S&T) – which is in essence early stage RDT&E – will be increasingly critical to shape outcomes, requirements, and program choices.

Standing at nearly $16 billion overall in FY20, S&T funding is substantial, and there are many points of entry across the Services, as well as DARPA. Yet, in years past it has been difficult to find many clear-cut cases of this S&T translating into acquisition programs.

With DoD’s emphasis on using new development models to bring promising technologies rapidly into the force, industry should now start to see a more direct benefit from S&T contracts.

Today many Pentagon leaders are advocating a different innovation and procurement approach, in which new technologies are more quickly and frequently developed and inserted into platforms and programs – then upgraded regularly thereafter (not necessarily by the original prime contractor).

This shift suggests that promising technologies generated at the S&T phase will be fast-tracked through (or around) the acquisition system to be integrated into existing programs (or become their own).

RDT&E has outperformed overall DoD topline growth since the Budget Control Act-driven downturn in defense spending. The difference in growth reached its peak in 2017, signaling a shift of DoD priorities toward next-generation capabilities that persists today. 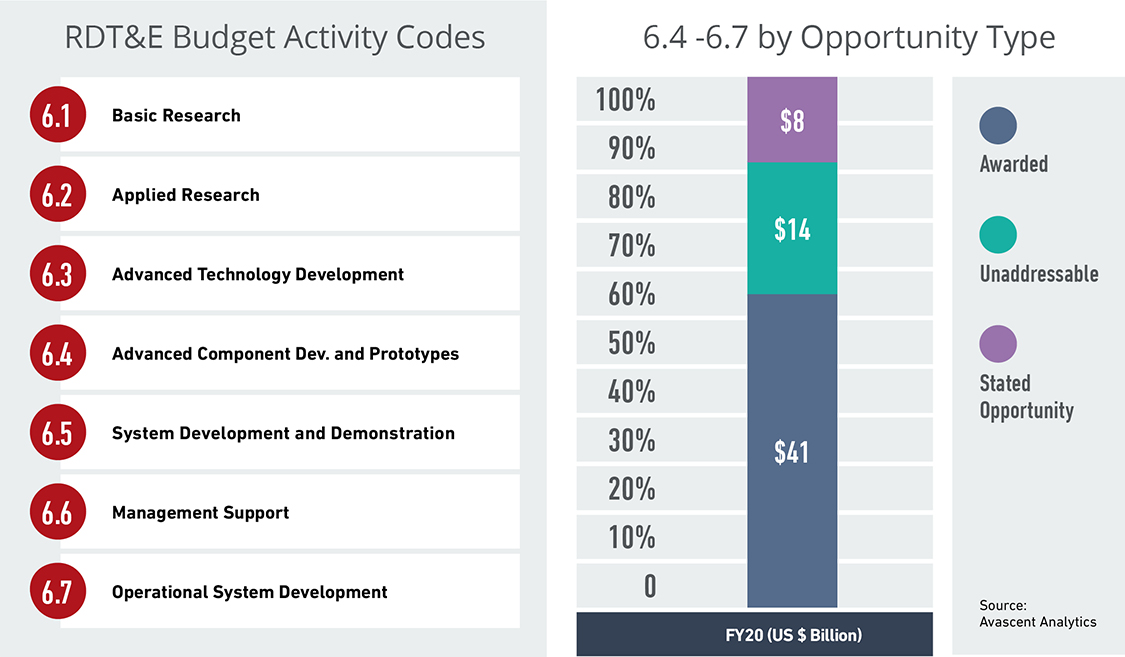 Budget activities 6.4 to 6.7 account for the majority (85 percent) of RDT&E spending, as programs of record mature towards production and procurement. At the top of the list is the B-21 Long-Range Strike Bomber which, at $3 billion, receives three times as much late-stage funding as the next largest program (consistent with the ambitious goal of achieving the first flight of the B-21 by FY21).

Nearly 90 percent of the latter-stage unclassified funding is already under contract or represents work being performed by the government through the military labs or Office of Development Test & Evaluation.

The roughly $8 billion remaining – which, in principle, are available for new bids – are weighted toward major programs, such as Next Generation Air Dominance (NGAD) and Long Range Stand Off (LRSO).

These kinds of programs have been longer-term priorities for prime contractors that have already invested substantial Independent Research & Development funds or received initial technology maturation contracts from the government.

Some, like NGAD, will grow aggressively over the next decade and provide more opportunities to other firms for sub-systems development.

The earliest stage RDT&E budget categories (6.1-6.3) that make up the Science & Technology budget can provide a more promising area for those seeking to influence, and ultimately benefit from, the next major programs.

Over the past decade, S&T spending has averaged between two to three percent of the total DoD base budget and 12 to 14 percent of RDT&E requests. Defense strategy documents, non-governmental reports, and Congressional legislation have consistently called for S&T to receive a higher share of defense spending.

In fact, Congress habitually builds significantly on top of DoD’s requests for S&T, which is why year-to-year increases in budget requests can appear as spending decreases when compared with the prior year’s enacted level.

The largest sources of S&T funding are defense-wide (DW) agencies led by OSD & DARPA, followed by the Air Force, Navy, then Army.

In FY17 and FY18, industry received more than 40 percent of that funding, more than any other recipient. The next largest recipients were other government entities (called “intramural”), followed by universities and FFRDCs.[1] Across the DoD, DARPA spent the highest percentage of S&T funds on industry, while the Navy spent the lowest.

Inside the S&T Black Box

Key S&T Categories in the FY20 Request, (US $ Billion)

The stated top priorities will lead headlines and make up a significant portion of the FY20 S&T request. A closer look at S&T spending, however, suggests that funding exists in many other places.

It is critical to investigate labs closely to uncover not only their current work but also their future unmet needs. There is ample leeway for industry to shape future programs and align its own RDT&E portfolios with military priorities and gaps.

Avascent analysis of FY19-20 S&T coded programs provides examples of where DoD and the Services are probing for breakthroughs that could potentially transform warfare.

Industry has always had a stake in defense S&T given its role as the “seed corn” of future military modernization programs – though it was seen often as a double-edged sword. On the positive side, the S&T contracts funded firms’ labs and technology divisions, and fostered relations with DARPA and the military labs.

However, if industry produced a technological breakthrough via an S&T contract, it has no assurance that it would be able to capitalize on it later if that innovation became part of (or was the basis of) a new program. The government owned the intellectual property and would award the subsequent development and production contracts according to its requirements and preferences.

Clear cases of a firm’s S&T work leading to substantial revenue-generating programs were elusive. As such, industry often considered S&T projects with the military labs largely as an afterthought – or, at minimum, a productive and prestigious activity for corporate technology divisions – but not a business development priority.

In line with the NDS guidance, many Pentagon leaders are now advocating a different innovation and procurement model. For example, the Army’s Future Vertical Lift (FVL) will separate procurement of the helicopter airframe from the mission systems inside, requiring the platform to have “plug and play” built into the design from the outset.

The emphasis will be on rapid funding and prototyping of multiple smaller programs under a “fail fast” model, a process US Air Force Assistant Secretary for Acquisitions Will Roper said was “like running naked through briar patch.” This mindset is increasingly becoming the norm for defense leaders and acquisitions experts across the political spectrum, suggesting that it is here to stay.

The commercial sector intends to be a promising source of rapid innovation, but there will naturally be limits to what those “non-traditional” companies can or will do. Faced with the uncertainties and limitations of widely adopting commercial technology, the Pentagon will still need to ensure that its own S&T pipeline plays a central role in building the future force.

"Given this new reality, industry must increasingly
utilize defense S&T successes to shape new
acquisition programs or disrupt existing ones."

Given this new reality, industry must increasingly utilize defense S&T successes to shape new acquisition programs or disrupt existing ones. Just as DoD is adopting more of a portfolio approach to RDT&E, so too should industry assess product investments collectively from an enterprise level, rather than as independent and unrelated initiatives.

This means industry will need to:

To be sure, the perennial challenges in defense acquisitions remain. Despite the many initiatives underway – including use of Other Transaction Authorities (OTA) – to bring new technology directly into the force faster, the proverbial “valley of death” is still wide and deep.

Nonetheless, in this new acquisition environment industry cannot afford to maintain an arms-length and episodic approach to S&T projects and the labs. As the timeline from drawing board to lab to battlefield shortens, defense firms risk being left behind. Those companies that adapt to these new realities will be best positioned to reap the benefits.

[2]       Estimates based on text analysis of approximately 2,500 S&T cost element descriptions in the FY2020 request

How NATO Military Spending Measures Up Against Russia and ChinaPerspectives 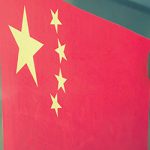