"The question is… Can they build it at the appropriate set of economics that allows us to fly it successfully? I would worry that that next-generation 50-seat jets would… not have what we need."

As highlighted in Part 1 of this series, the regional aircraft market is poised for a long overdue upswing.

It has been a challenging two decades as fuel and labor concerns have dismantled the business case for most regional aircraft, all but paralyzing the OEM landscape and clouding regional aircraft market forecasts.

This is particularly acute in the large US market, where absent any viable aircraft options (not withstanding US airlines’ reticence to turboprops), mainline carriers are increasingly choosing to cut regional service. United Airlines, for example, removed 12 small cities from its regional route map in November 2021, on the heels of similar moves by Delta and American Airlines.

And just as airlines have started to question the viability of their regional route networks, they are also increasingly reassessing their environmental footprint as well.

This was recently underscored by global airlines’ commitment to net-zero emissions by 2050, announced in advance of the UN Climate Change Conference (COP26) in November 2021.

Fortunately, a variety of revolutionary propulsion concepts and other innovations are beginning to mature and align with the limited weight and performance of sub-100 seat regional aircraft.

This creates a profound opportunity to not only begin addressing airlines’ economic and sustainability concerns, but also revitalize regional flying and unlock new upside in regional aircraft market forecasts.

This will not only help revitalize regional aviation, but it will cultivate an invaluable proving ground for technologies that can one day earn their way onto larger commercial aircraft. 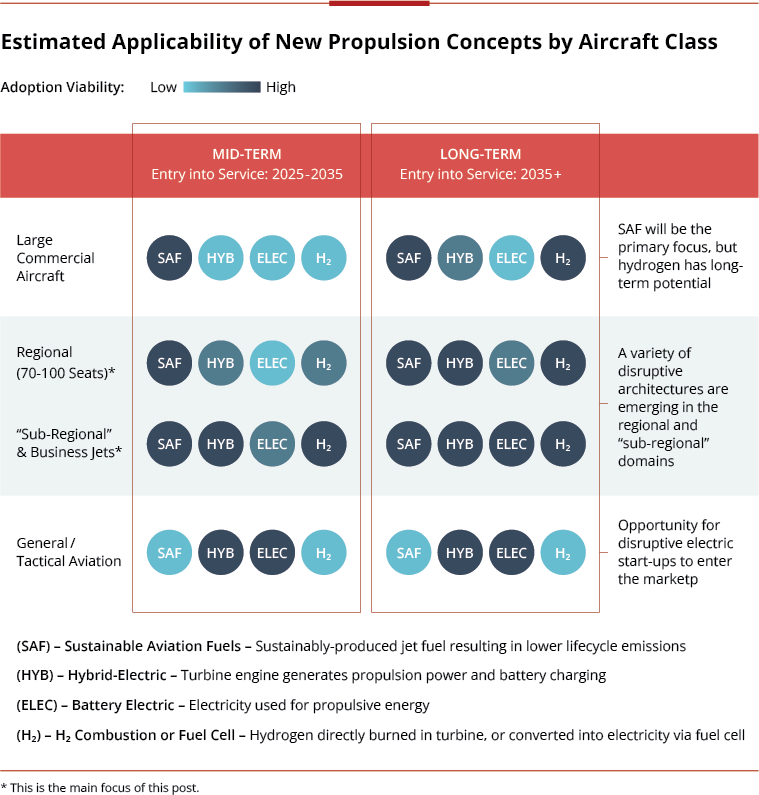 Although promising, the pace of adoption will be uneven and unpredictable. The tradeoffs between performance, economics, operational support and emissions across competing propulsion architectures are still not fully formed.

In addition, the investment hurdles are significantly higher for regional aircraft OEMs; it may be challenging to close the business case for advanced new aircraft when sales volumes, prices, and profits for regional variants tend to be smaller relative to larger Boeing and Airbus aircraft.

All industry stakeholders are therefore beginning to examine a range of looming issues, including: 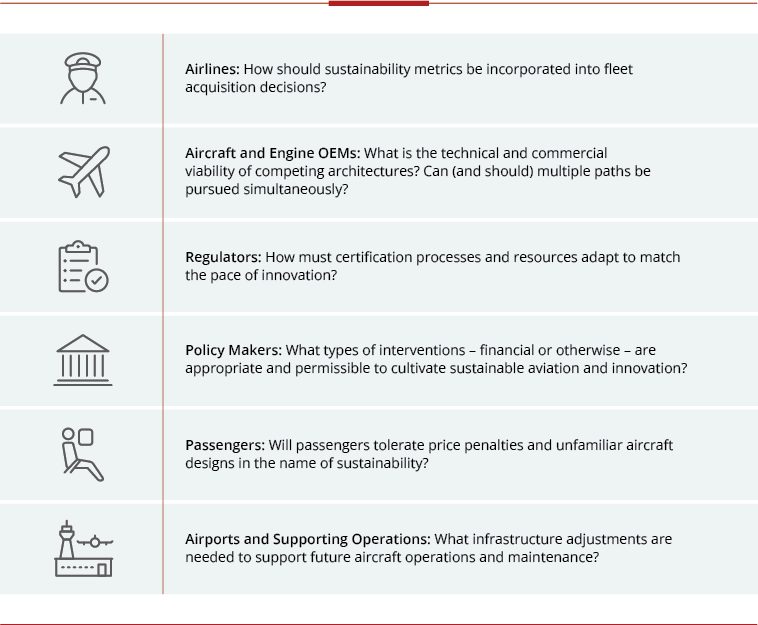 There are far more questions than answers at this point, leaving many future design options on the table. The paralysis that has historically plagued OEMs will therefore persist in the near-term, but in a new way with a brighter future on the horizon.

Concerted action is now warranted for those suppliers and stakeholders that want a role in the industry’s future. Careful prioritization of the enabling technologies that can be applied across multiple viable aircraft architectures will become a focal point for near-term strategic plans.

Despite its current monopoly production position in regional jets, Embraer has been compelled to make a disruptive first move to protect its long-term position.

Facing lackluster sales for its reengined E-Jet E2 series – in large part due to its upgraded 76-seat variant exceeding US scope rules – Embraer has been studying a modern turboprop with 20% lower operating costs[2] that would fit US scope and outmatch De Havilland and ATR’s 1980s-based aircraft.

While it waits for more clarity, ATR has prioritized a near-term engine upgrade (the P&WC PW127) that offers marginal fuel burn benefit but offers 20% lower maintenance costs. It will also begin incorporating SAF.

The other regional incumbent, MHIRJ (based on Mitsubishi Heavy Industries’ acquisition of Bombardier’s CRJ), is exploring a potential production restart of the traditionally-powered CRJ, as well as a hydrogen propulsion option with partner ZeroAvia.

This current technological indecision underscores how the emissions vs. cost reduction tradeoffs (and industry’s eventual acceptance of these tradeoffs) are still not fully understood across propulsion options.

De Havilland estimates that its hybrid Dash 8 demonstrator with Pratt & Whitney Canada can achieve a 30% reduction in fuel consumption; this brings some environmental benefit but does not match hydrogen propulsion’s zero-emission operations.[5]

And yet, despite its environmental benefit, a 2020 European Union study estimated that a hydrogen-powered regional aircraft would generate 5-15% higher unit costs relative to a conventional option – at least until the hydrogen fuel supply dramatically scales up.[6]

As OEMs continue to explore either aircraft upgrades or clean-sheet designs and balance those decisions against customers’ investment timelines, it is clear there will be complex new wrinkles that shape future regional aircraft market forecasts. 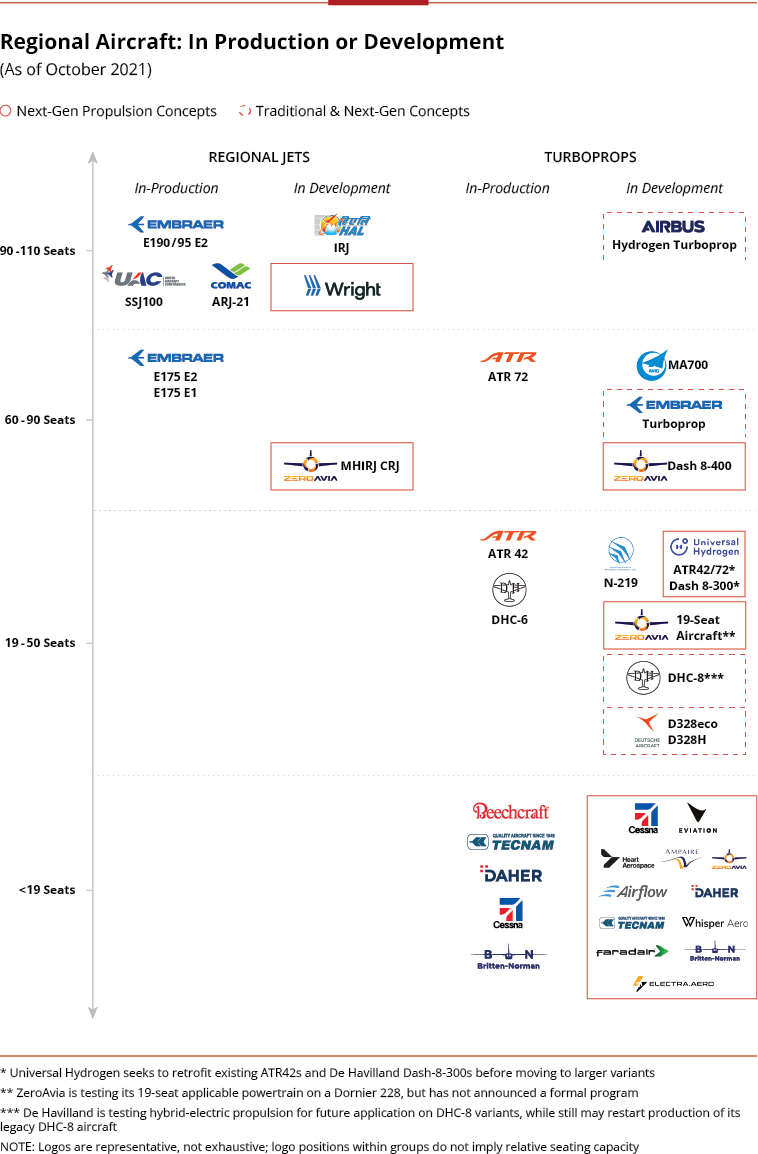 The solutions that do win out at 70+ seats later this decade – and could one day also migrate further into larger aircraft – will be shaped by a wave of development efforts progressing below 50-seats, a veritable “sandbox” where new technologies will be vetted on smaller aircraft with reduced size and range requirements.

Embraer’s November 2021 announcement of its four “Energia” aircraft concepts, which will span 9-50 seats with a mix of propulsion options, is indicative of how OEMs see this segment as an opportunity to mature key technologies for future upmarket applications.

Nevertheless, Embraer still intends for one or more of these concepts to earn a formal program launch in the future, should the economic and operational benefits pan out.

“We don’t want just to do a theoretical exercise…we want to bring [these] solutions to life as soon as they are available. So we will take this time to understand with suppliers and customers the technical and economic viability of the solutions.”

Embraer and others would be chasing a large expected demand pool that can be unlocked with more efficient aircraft. A 2016 NASA study concluded that as operating costs decline, 48-seats becomes the ideal capacity for regional aircraft operations – not only by optimizing profitability, but also because smaller aircraft can open up far more destination pairs and trip frequencies.[7] This would warrant a dramatic new mindset when developing regional aircraft market forecasts.

Furthermore, approximately 50% of the ~5,000 regional fleet replacement opportunity over the next 15 years consists of sub-50 seat aircraft, reinforcing the demand opportunity for more efficient aircraft.

Below the 20-seat threshold, now increasingly referred to as the “regional air mobility” or “sub-regional” market, dozens of start-ups are primarily looking to exploit newly applicable battery technologies.

Yet until it is clear which concepts can thread the needle between economic, operational, environmental, and policy concerns, suppliers must begin evaluating how it can place smart bets on those enabling technologies that can earn their way onto the inevitably wide range of winning aircraft architectures.

Flight of the Phoenix? The Future of the Spacejet M90 and Spacejet M100Altimeter